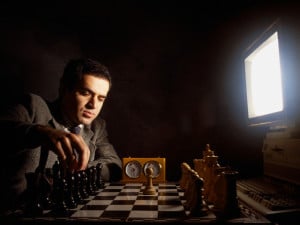 When chess grandmaster Jan Hein Donner was asked what strategy he would use if asked to play against a computer, he replied: “I would bring a hammer.”

The problem of a widening income gap has long plagued commentators and policy makers alike. The passage in 1993 of section 162(m) of the U.S. Tax Code, which limited the deductibility of executive compensation, played a role. It caused an increase in the use of options, particularly among internet start-ups during the greatest bull market of the last hundred years – a bull run that ended in March 2000. That was when the gap reached its widest point.

Since then, the use of options has declined. However, amplifying the divide has been the cronyism that exists and has grown between Washington, Wall Street and big business, which has resulted in a concentration of capital in the hands of a few corporations, big banks and individuals. Hypocrisy runs thick and deep among those who pose as egalitarians.

They repeat the same platitudes, smile benignly and, with eager, grubby hands, reach discretely behind for dollars. While all politicians partake, the combination of greed and dissimulation lie most obviously among those like the Clintons’ and Obamas’. But perhaps as insidious as anything has been the march of the machine and its economic consequences. An article on this subject, written by Daniel Finkelstein, appeared in last Wednesday’s London Times.

Mr. Finkelstein wrote: “In the past 30 years, the proportion of national income taken as a reward in the form of wages has fallen while the proportion due to owners of capital has risen. And this has happened all over the world, pretty much regardless of what politicians have tried to do about it.” The owners of technology stand in stark contrast to the individuals who are replaced. But there is nothing new in this. It has accelerated in very recent years, as intelligence has been incorporated into increasingly sophisticated programs and algorithms. But the origin of Schumpeter’s “creative destruction” goes back much further. In 1776 Adam Smith, in the “Wealth of Nations,” wrote of the division of labor, as it applied to the manufacture of pins. It was the start of applying specialization to manufacturing. In 1913, Henry Ford created the assembly line for the manufacture of the Model T. With a slow-moving conveyor belt, workers repeatedly performed the same task, which may have been mind numbing for the individual, but decreased the time to produce a car by a factor of eight. The result was more cars at lower prices to consumers. Increased production meant increased employment. Higher paid workers and lower car prices meant increased demand.

Machines are increasingly able to do things that in the past required humans. In the New York Times’ investigative reporter Charles Duhigg’s new book, The Power of Habit, a man walks into a Target outlet, complaining that the store had been sending his daughter discount vouchers for baby clothes and equipment. “She is only in high school,” he complained. A few days later, the man was back, apologizing. His daughter was indeed pregnant, a fact known by Target’s computers because of her buying habits, but unknown to her father.

Algorithms allow American Express to notify us when our spending habits take a change. If we cannot be reached to confirm a purchase, our card is cancelled. Artificial intelligence allows surgeons to operate remotely and Drones to kill terrorists in remote locations with little collateral damage. Google’s driverless cars have traveled well over 200,000 miles. A programmer and a PC can replace a company’s entire marketing department, using algorithms to measure consumer behavior. Machines replaced the London Stock Exchange twenty-seven years ago, and today handle much of the trading in New York Stock Exchange-listed securities. Engineering and design firms have been affected, improving output per employee, much as manufacturing firms did thirty years ago. Newspapers are facing competition from bloggers, as dangerous and illusive to them, as terrorists are to Western democracies. Massive Open Online Courses (MOOCs) are revolutionizing the college experience – reducing prices and increasing the value of selective professors, but eliminating the “college experience.”

Wall Street has applauded many of these productivity improvements, as the consequence is generally improved earnings and higher stock prices. But corporate productivity and individual productivity are on different axes. Machines, in saving labor costs, improve a businesses bottom line. On the other hand, and especially as machines become increasingly “smart,” they carry out tasks that negate the need for skilled labor. The consequence, as Tyler Cowen noted in his new book Average is Over, is an America that has divided in two – the children of “Tiger Mothers” and the rest. Mr. Tyler wrote that markets are exceptionally accurate at measuring an individual’s economic value, sometimes with “oppressive precision.” Thus we have millions of individuals who have less value to the economy than they had a few years ago. We either become masters of computers, or they become our executioners.

There are no easy solutions. Income redistribution is the usual answer for those on the left, but social engineering does not address the cause and, in fact, tends to aggravate the situation. The answers lie in education and the need for people to adapt and anticipate the “next new thing.”  Creative destruction is an unpleasant, but a necessary aspect of economic growth.

Equality is a nebulous condition. Our Constitution ensures we are equal under the law. The Declaration of Independence states that all of us are endowed with certain unalienable rights. Civil society demands that we have equality of opportunity. But there is no way in which a democracy can ensure equality of outcomes. Those that suggest otherwise are knaves and hypocrites. If there is inequality in our society, it exists in Washington where the legislature passes laws exempting themselves from its consequences. There will always be bosses and workers. Equality of outcomes has never been achieved under socialism, communism or despotism. In Russia and China, power and wealth accrue to those that govern and their crony friends. The gap between rich and poor in those countries is far greater than it is in ours, which is why we should fear the growing cronyism in our own country. The need is to find a balance in a fluid and ever-changing society. The source of that balance exists in the steadfast principles on which our country was founded – the embedded and unchanging rights granted each of us – that all men are created equal; that we are all endowed with unalienable rights, and that government derives its just powers from the consent of the governed. Those are the ideals we must defend and those are what we must never lose.

Individuals should not throw up their hands in despair. There are personal characteristics that will always be in demand, and that are not (yet) replicable in a computer. They will, however, drive future success – intelligence, aspiration, motivation, creativity, a willingness to accept change and fearlessness for the future, and, perhaps most important, a willingness to take risks. None of this answers the problem of a widening income gap. In a global world, in which it is increasingly easy to move financial assets and where location matters less than it did, the power of the very wealthy grow in relation to his or her government. Patriotism, for many of these people, means less than preservation of one’s wealth. The manifestation of that can be seen in major cities, like New York, London, Geneva, Hong Kong and Singapore – cities in which many of these people have homes and assets. If taxes become too high, a new jurisdiction is found. Money can be moved with the click of a mouse.

Government can expand educational opportunities – emphasizing the needs of the student over the demands of teachers’ unions, for example. Cities like New York should acknowledge that charter schools are still public schools, even though the teachers are not necessarily members of a union. Federal and state governments can reduce regulation and simplify tax codes. Government can never mandate equality of outcomes without greatly reducing overall wealth, and voiding liberty. But they can encourage equality of opportunity; so that motivated children of the poor will not be disadvantaged to those of the rich.

While politicians sell this condition as unfair, the world is the way it is. Teaching a person to fish is far better for the individual than giving them a fish. Dependency leads to poverty. Another characteristic of success is optimism. A friend recently sent me this quote from British novelist, J.B. Priestly: “I have always been delighted at the prospect of a new day, a fresh try, o