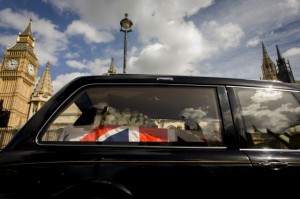 One great irony of Margaret Thatcher’s death is that it comes at a time when the Western world is once again in need of someone of her character, her economic and political common sense and the moral courage she had to make unpopular decisions. “The principles she established,” wrote Andrew Roberts in Tuesday’s Wall Street Journal, “…have perhaps more relevance now than at any time since the 1980s.” Europe is a mess. Britain is in turmoil.

The U.S. is like a ship that has lost its anchor. We live in a sea of moral turpitude, breeding dependency while starving personal responsibility. Our government has assumed debt at alarming rates and made promises that will be impossible to keep. At the same time, we seem unable to temper terrorist regimes, be they in the Middle East or East Asia.

Mrs. Thatcher was one of the last Century’s great political leaders of the Western world. She joins a pantheon that includes Churchill, Roosevelt, Reagan, de Gaulle and Adenauer. All were leaders who had a significant impact on their countries and the world. Three of them came to prominence during World War II. Do men cause events, or do events make men? It is an age-old question, without any real answer. History always remembers those who led during times of war. But Ronald Reagan and Margaret Thatcher did something different. They were elected when neither country was at war, and they each saw their respective countries in economic and cultural decline. They both altered that path. The Western world was fortunate that their years in office overlapped so precisely. Their most vociferous critics have been beneficiaries.

Baroness Thatcher of Kesteven, as she became following her resignation as Prime Minister, has certainly been controversial. She made enemies. There were the coal miners, who endured a strike lasting 362 days without a settlement and who, at its end, saw the elimination of at least 20,000 jobs and the collapse of their union. There were the pro Europeans who complained that her policies appeared contradictory and who disapproved of her reversing Edward Heath’s moves toward greater dependency on Brussels and the European Community. There were feminists who claimed she did not respect their cause. “The battle for women’s rights has largely been won,” she told them. She once referred to the genre as “fashionable rot.” In 1983, when she ran for re-election, many feminists taunted her. “Ditch the Bitch,” was their rallying call. Even in death, there are those who still see her that way.

But, a lot of the criticism was patronizing. Most British politicians were men, and most were products of public schools (Britain’s private boarding schools), and Oxford or Cambridge. While she had two Oxford degrees, she attended on scholarship. She was born in a cold-water flat in Grantham, Lincolnshire, over a grocery store owned by her father – a flat with outside plumbing. Her upbringing had more in common with early 20th Century American political success stories than late 20th Century British. In 1970, in Edward Heath’s government, she was appointed Secretary of Education, the only cabinet position then open to women. Her next job would be leader of her party in 1975 and then, four years later, Prime Minister. Personal responsibility, ambition, honesty and hard work were part of her personality.

The arts and academic establishment “loathed” her, according to Joseph Gregory in Tuesday’s New York Times. She was not ‘politically correct.’ A proposed honorary doctorate at Oxford was denied after a faculty debate, despite it being a tradition to offer such degrees to Prime Ministers who had attended the University. Even Paul Johnson, the conservative historian who wrote a wonderful column on Mrs. Thatcher in Tuesday’s Wall Street Journal, admitted that “she had become more imperious during her years of triumph and that power had corrupted her judgment.” Some of the criticism was mean-spirited. Youths held death parties on hearing of her passing, which says more about their ignorance and the moral relativism of our day than it does about her policies. Without her revitalizing the British economy thirty years ago, the demonstrators would not have been wearing their designer jeans and texting on their iPhones.

In an interesting aside, on Monday night in New York, the audience watching “Billy Elliot,” the Broadway musical, which is set during the coal strike of 1984-85, was asked whether they should delete the song, “Merry Christmas Maggie Thatcher,” which celebrates her future death. Properly, in my opinion, they elected to include it. Whether one agrees with its sentiment or not, the song is part of the show. On the other hand, reflective of the antipathy that Mrs. Thatcher still generates, Judy Garland’s “Ding Dong, the Witch is Dead” shot to number 27 on iTunes’ UK list and “Tramp the Dirt Down” appeared at 92.

Margaret Thatcher was outspoken. Taking on British labor unions in the late 1970s, she said that those who compromised, who strode the middle of the road, risked getting hit by traffic coming both ways. “I’m not here to be liked,” she stated. In 1975, and while in opposition in the late 1970s, she told the Tory leader Edward Heath she was putting herself forward for his job. Heath responded rudely, without standing: “You’ll lose, you know.” She won handily on the second ballot. Four years later, she was Prime Minister and Heath was history. At her first meeting with Mikhail Gorbachev, she said: “I want our relationship to get off to a good start, and to make sure there is no misunderstanding between us – I hate Communism.” In 1984, following an IRA bombing that killed four people, including a member of her cabinet, she declared: “The fact that we are gathered here, now – shocked, but composed and determined – is a sign not only that this attack failed but that all attempts to destroy democracy will fail.” Years later, as President George H.W. Bush was putting together a coalition to chase Iraq out of Kuwait, she famously told him, “Remember, George, this is no time to go wobbly.”

It will be for her successes, in dealing with an ailing economy and a still-aggressive Soviet Union, that she will be remembered. She served as Prime Minister just under twelve years, the longest serving British Prime Minister in the Twentieth Century, the longest since William Gladstone. From her earliest years, she was grounded in the fundamentals of individualism and fiscal prudence. By the time she had left office, the principles of Thatcherism were well known and had been copied, according to Professor Johnson, in fifty countries. Those principles included: a belief that economic freedom and individual liberty are interdependent; that personal responsibility and hard work are the only means to national prosperity, and that free-market democracies must stand firm against aggression. As is obvious, she was a disciple of Friedrich Hayek and Milton Friedman.

It is hard today to remember the desperate straights in which England found itself during what came to be known as the “Winter of Discontent” – the winter of 1978-79. Like Turkey at the start of the 20th Century, Britain was being described as the “sick man of Europe.” Inflation was 13.4% in 1979. It would peak the next year at 18% before declining. By 1983, it was down to 4.6%. The top income tax rate was 83%. She would cut it to 40%. Electricity shortages had reduced the work week to three days in many industries. A third of the economy was linked to loss-making state owned industries. Trade-union power was undermining the economy with persistent strikes and inflationary wage settlements. Historian, Paul Johnson described the scene: “The Boilermakers Union had already smashed the shipbuilding industry. The Amalgamated Engineers Union was crushing what was left of the car industry. The print unions were imposing growing censorship on the press. Not least, the miners union, under Stalinist Arthur Scargill, had invented new picketing strategies that enabled them to paralyze the country whenever they chose.”

Before she died, Mrs. Thatcher left instructions she not be given a state funeral. As Parliament would have to approve the funds, she felt she was too divisive a figure. (Interestingly, another British Prime Minister who asked not to have a state funeral was Benjamin Disraeli, the first – and only – Jewish Prime Minister.) Compliance with her wishes is what will be done and what should be done. Yet, I am bothered that a nation that so benefitted from her years in office will not accord her the same honor provided General Douglas Haig in 1928. As commander of the British Expeditionary Forces, he was responsible for the losses at the Somme in July 1915. On the first day alone of that infamous battle the British suffered 57,470 casualties, of whom 19,240 died. Before that one battle was over, five months later, Allied casualties totaled 623,907, of whom 146,431 were dead. Yet the trenches were only a few hundred yards from where they had been. And General Haig was accorded a state funeral, and not Margaret Thatcher!

She was not warm and fuzzy. There were many who were offended by her directness. She did not have Ronald Reagan’s ease of manner and sense of humor. The author Andrew Klavan, in a memoriam to Mrs. Thatcher put it well: “…in order to accomplish the truly good things in life, you sometimes have to court the disapproval of the finest, most sophisticated, most appealing, most educated and most urbane people…” Mrs. Thatcher bravely did