It takes some time for the market to comprehend when stress is built up in the economic and financial systems. This is part of the hysteresis reality. When financial stress builds up for some time, a crisis ensues that is followed by a recession. The graph below from the St. Louis Fed is indicative of this story.

Financial stress was built up and sustained for a number of years until the crisis of 1997-’98 erupted which was followed by the dot.com collapse and the recession of 2001. Same thing happened during the 2008-’09 crisis. Financial stress is currently building up but is still below zero (the average value based upon which the index was designed). The index is made up of several weekly series such as interest rates, volatility, and spreads. The fact that it has not crossed the threshold level of zero is positive, however the trajectory is clear. This could be an inflection point and the policy reaction to it would be crucial for it to stay close to zero.

We choose to define market capitulation differently than its traditional definition, which says that selling takes place due to some form of panic. At BlackSummit, market capitulation means that an inflection point is about to occur which has the potential of transforming a secular trend and market direction. Evaluating the possibility of that reversal is part of the risk mitigation process, and hence our previous recommendation for portfolio hedging and anchoring.

If the financial stress trajectory continues and is sustained (which depends upon the policy reaction to it) then risk parity considerations should come into play. The latter call for unorthodox and unconventional asset allocation models that defy traditional ones. As we have stated before, we reject the secular stagnation hypothesis because the essence of the market is to innovate and through innovation to avoid a prolonged stagnation. Failure to innovate portrays a sclerotic market guided by bureaucratization rather than liberating forces that set the tone of a free market. Hence, the co-existence of a secular stagnation and free markets is an oxymoron.

Changing asset allocation after the capitulation has taken place is hindsight and sometimes might be late. We are not of the opinion that the market has capitulated yet, because the financial stress is still below normal. Globally, financial instability too is not at an inflection point. However it too follows an upward trend due to three factors:

First, credit risks for emerging markets and some corporate non-financial businesses (including US entities) is clearly on a steady upswing. Rising corporate distress may spread and liquidity issues could be exacerbated

Second, the interplay between credit risks and other indicators, such as earnings and growth prospects, increase the possibility that the advent of an adverse and unexpected development could create an amalgam of a shock. The abandonment of ZIRP policy by the Fed was wise because ZIRP contributed to the rapid growth of debt in the US and abroad through the financial flows and the “reach for yield” strategies. If the Fed does not capitulate, in the traditional sense of the term, and raises short term interest rates at least once between March and June, then financial stress could stay close to zero

Third, risk migration is rising. Policy overreaching leads to policy impotence (where fiscal and monetary policies have minimal if any effect). As the latter is widely recognized by market participants, risk migration becomes a force of contagion and financial instability becomes a feature of the disequilibrium of the unanchored environment the markets live in since 1971

It is also interesting to note that the cross-asset implied volatility (in terms of standard deviations) crossed the zero threshold level but seems to be stabilizing (see graph below). This is another thing we are watching as we assess market capitulation (as we defined it in the beginning of this commentary) for the purpose of changing our asset allocation models. 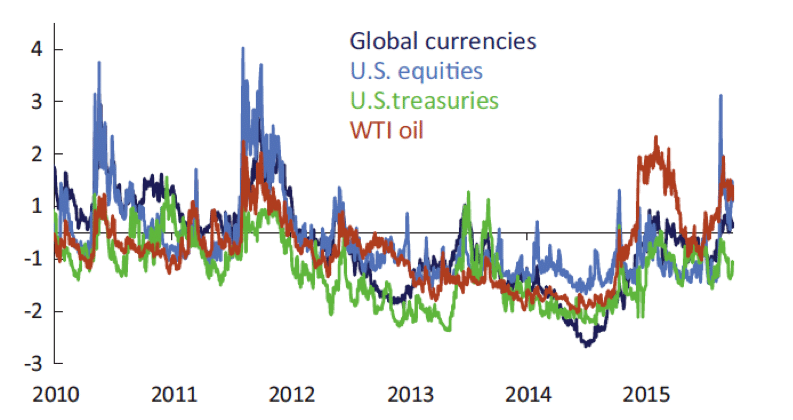 The market tends to overlook hysteresis and thus cannot be efficient. Financial stability assessment is a work in progress that requires diligent review. Portfolios are able to sustain a drop of 10%; however, when capitulation comes it might stay for longer than expected and could see market drops that are completely unexpected. Building defensive mechanisms is wise to take place before capitulation takes effect.

The views expressed on AustrianCenter.com are not necessarily those of the Austrian Economics Center.
Federico Fernández2019-01-14T05:57:42+01:00