Over the last few days the markets have exhibited signs of fears and some distress. Diverging a little bit from our recent commentaries that dealt with the investment paths of 2016, I would like us to review the main reasons for the recent market behavior. Before describing each one of the main suspects, let me state from the beginning that this is mainly due to liquidity issues related to the bond market and especially to high yield bonds.

I believe that there are five main reasons for the recent market turmoil exhibited below in the SPY index for the S&P 500. 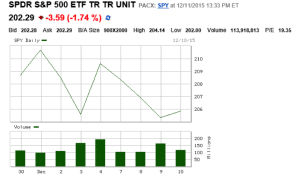 Let me start with the most talked about culprit: the Fed’s potential raising of short term rates on Wednesday December 16th. Even if I am not a big fan of the efficient market hypothesis, I cannot accept that the market – knowing that previous rate increases did not affect long term rates, as we emphasized in a previous commentary – hadn’t already discounted a rate increase, making this explanation unlikely.

The second suspect also has to do with central banks, but this time with the ECB. The markets reacted negatively in the not so decisive actions by the ECB in the beginning of the month. Euro Stocks have dropped significantly since then, as shown below. 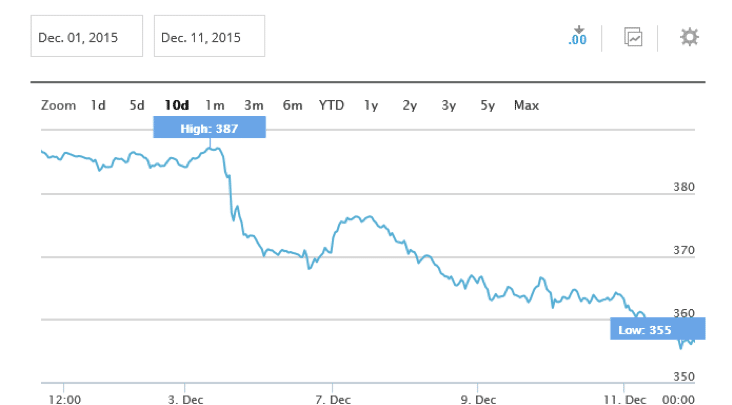 Again, it would be difficult to believe that this kind of indecision – corrected and amended by Draghi in a subsequent interview – could have such an effect in the markets.

That brings us to the third reason which has to do with the price of oil. As the graph below shows, WTI has dropped by close to 20% in the course of the last month. 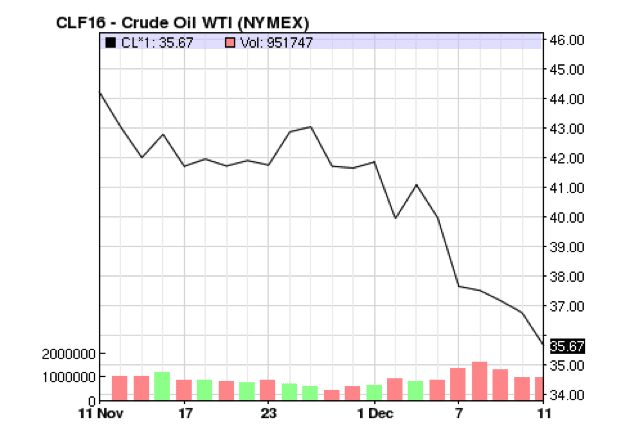 The drop in oil prices is feared to be signaling a downturn in the economy due to lower demand and lower investment spending. However, while there is truth to that, as our last commentary explained, the expected boost from the indirect higher incomes will more than offset that negative effect.

That brings us to the fourth suspect which deals with China. Fears about Chinese growth along with the decision of the Chinese Central Bank to allow the Yuan to depreciate more – as we expected and articulated on our last commentary – have regenerated concerns and turmoil in emerging markets and their currencies. Emerging market currencies continue being in significant turmoil. 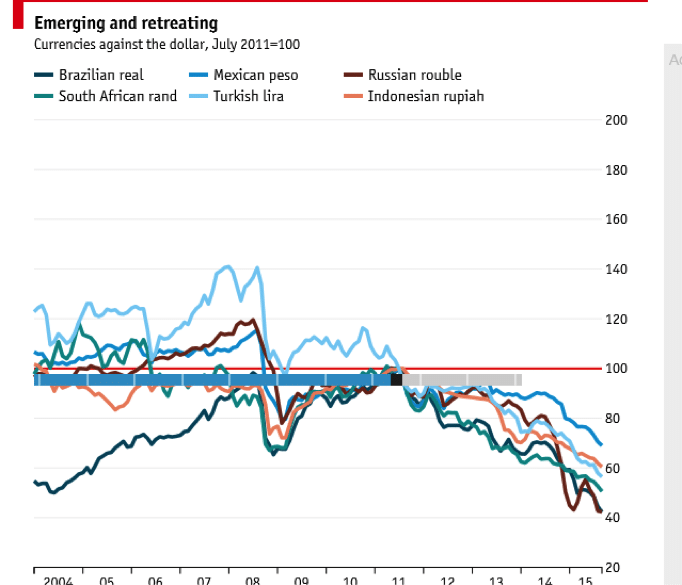 It is our belief that the Chinese factor is a more important factor than the previous three, but as we recently stated, our belief is that China will not experience a hard landing in 2016, and thus any market turmoil should be seen as temporary.

That brings us to the fifth and most important suspect/cause in our opinion, which has to do with credit conditions and the distortions that the prolonged Fed’s ZIRP policy has created. Spreads between high yield bonds and Treasuries are rising. Fears of default are elevated and market mispricing is taking place. 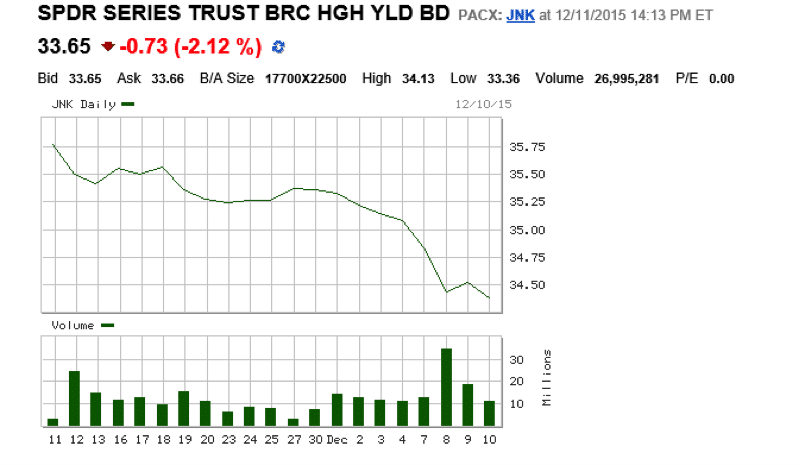 As the graph above shows, high yield bond prices are dropping and the corresponding yield is rising, portraying tight credit conditions. The mispricing implies that 25-30 percent of those companies will go bankrupt, which certainly is an exaggeration. While we are expecting that the default – especially of some energy companies – rate will increase from its current 2.5 percent to around 4-5%, we certainly do not expect that default rate to reach double digits, and thus our judgment call that mispricing is taking place in the market.

In conclusion we would say that the lower lows that we are currently observe may be the prelude to a more normal market in 2016, especially if the financial repression slowly is put to a stop.

The views expressed on AustrianCenter.com are not necessarily those of the Austrian Economics Center.
Federico Fernández2019-01-14T05:58:10+01:00