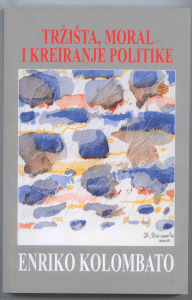 Prof. Enrico Colombatto is a dear friend of the Austrian Economics Center and regular speaker of Free Market Road Show. His book” Markets, Morals and Policy Making” is also now translated  in Montenegrin, beside its well-known English version.

This book should be of interest to students and researchers focussing on economic theory, political economics and the philosophy of economic thought, but is also written in a non-technical style making it accessible to an audience of non-economists.

The book represents ” A New Defence of Free Market Economics“. Free-market economics has attempted to combine efficiency and freedom by emphasizing the need for neutral rules and meta-rules. These efforts have only been partly successful, for they have failed to address the deeper, normative arguments justifying – and limiting – coercion. This failure has thus left most advocates of free-market vulnerable to formulae which either emphasize expediency or which rely upon optimal social engineering to foster different notions of the common will and of the common good.

The views expressed on AustrianCenter.com are not necessarily those of the Austrian Economics Center.
hayek_admin2019-01-14T06:09:25+01:00