The markets have been used to central banks actions that mitigate downturns (the famous/infamous puts that take the names of central bankers such as the Greenspan and Bernanke puts). Such actions actually induce risk taking, making the tail of outcomes and returns fatter. Interventions by central planners reduce market discipline and as more unorthodox measures are taken (e.g. negative rates, helicopter money, etc.) then productivity growth rates, which is the ultimate measure of growth, may suffer because debt-induced measures cover up financial fractures that undermine economic growth.

We wrote before about our concerns regarding productivity growth rate which again resembles the bad years of the 1970s, as shown below. 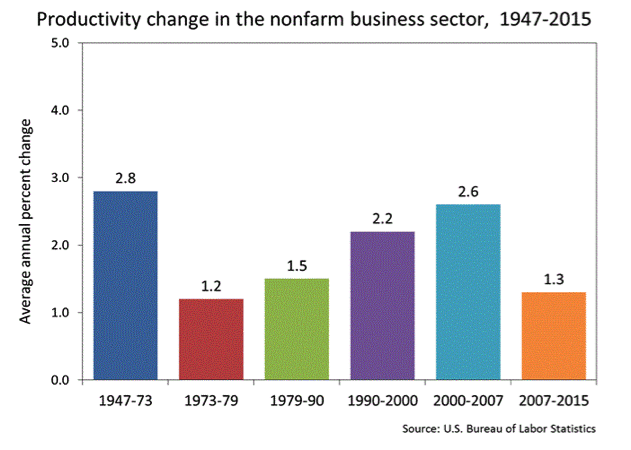 The unorthodox monetary measures induce financial repression and help the federal government meet her debt obligations, but are not a force for growth. Consequently, capital expenditures that can advance productivity growth rate are falling as shown below, and as a result productivity suffers. 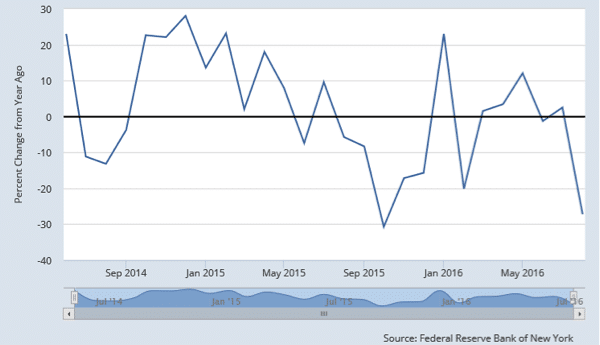 In this challenging environment the traditional balanced asset allocation model 60/40 (60% in stocks and 40% in bonds) seems to be obsolete, as is the passive asset management style (riding an index). In this environment where bonds are in a bubble territory, and paying a premium to buy them guarantee capital losses, investors are induced to take on more risks and hence they seek equities that pay relatively decent dividends. No wonder then that stocks that historically pay growing dividends may outperform pertinent benchmarks.

Without denying that this might temporarily be a tactic (certainly not an investment strategy) that can produce some income (assuming that the companies bought have strong fundamentals), we choose to focus on two characteristics that have proven their power through the time, namely: the earnings yield (EY) and the return on capital (ROIC). The former (EY) is the inverse of the price/earnings (P/E) ratio and signifies the earnings power of every dollar spent on the particular stock. The latter (ROIC) can easily be compared to the cost of capital and thus reveal the productivity of capital (debt and equity) deployed.

As we review the substance of the G20 meeting that just ended in Hangzhou China, we focus on a few lines from the pertinent IMF report: “The weak outlook can further reduce incentives to invest and slow down trade, adding to demand shortfalls and limiting the room for productivity gains going forward. At the same time, income growth has not only been meager, it has bypassed low-income earners in many countries, raising anxiety about globalization and worsening the climate for political reform.”

Starting with the last concern (political reform) who can neglect the rise of populism? Should we talk about Brexit, the Five Star Movement in Italy, Marine Le Pen in France, or the big win in state elections of the Alternative for Germany party over Chancellor Merkel’s party last weekend? Of course, the essence of the IMF’s concerns focus on lower capital spending that inhibits growth, income, and productivity increases.

The times we live are abnormal by any standard. The global economy is susceptible to a system-wide failure and is looking at the lenders of last resort (central banks) to strengthen their puts. As the ECB (European Central Bank) runs out of paper (bonds) to buy, who would be surprised if it chooses the route of start buying equities? After all, it would simply follow the steps it has been following i.e. those of the Japanese and Swiss central banks which besides QE and negative rates they also hold about $100 billion worth of equities in their balance sheets.

Does the equity market still have legs to go? An equity buying programs from the central banks (especially if swap lines with the Fed are used) could give it a boost. In any case, and for the medium term we would rather stick with names that carry strong earnings yield and ROIC.

The views expressed on AustrianCenter.com are not necessarily those of the Austrian Economics Center.
Federico Fernández2019-01-14T05:55:10+01:00