Do you think you live in a free country? How do you define “free”? To help answer these questions, the new “Human Freedom Index” (HFI) has just been released. The report is published by the Cato Institute, the Fraser Institute and the Liberales Institut at the Friedrich Naumann Foundation for Freedom and authored by Ian Vasquez and Tanja Porcnik. It is the most globally comprehensive set of third-party data for 159 countries, and uses 79 data streams from a multitude of sources in order to reflect a broad perspective.

The five freest countries are: Switzerland, Hong Kong, New Zealand, Ireland and Australia. The U.S. ranks number 17. In addition to economic freedoms, the authors have also included measures of safety and security, religion, expression and information, association and assembly, the rule of law and others. Countries or locales with high crime rates where the law abiding are afraid to walk the streets after dark clearly reduce freedom. Prohibitions on peaceful assembly and limitations on what may be communicated over the internet or published also rob people of their freedom.

The authors use the classic definition of freedom as expressed by the father of modern political philosophy, John Locke, that freedom implies that an individual not “be subject to the Will of another, but freely follow his own.” In other words, freedom implies that individuals have the right to lead their lives as they wish as long as they respect the equal rights of others.

Some argue that freedom should also include freedom from hunger, or the right to “adequate” housing, or free medical care, etc. The problem with this “social justice” definition of freedom is that it requires others to give up some of their freedoms to provide for the desires of others — partial enslavement.

Those who demand “free” medical care are in reality demanding that someone else pay for their medical care — because medical care is not free and often very costly. Those who demand free stuff from government or others, when pushed, say the “rich” ought to pay for it — as if there were a never-ending quantity of rich people who would sit still while being fleeced.

One of the great advantages of being “rich” is that usually you can move your property and person to a jurisdiction where they are well treated. There have been endless experiments where countries have imposed very high tax rates on the rich — only to see the rich move. There is an interesting experiment taking place at the moment as a result of the Trump tax-rate reductions — which, while benefitting most Americans, does make it more expensive for the very wealthy who live in places like New York, New Jersey and Connecticut.

The governors of these high-tax states fear (for good reason) that the golden geese that they have been plucking may opt to move to Texas or Florida, so they are trying to devise ways to prevent them from flying away — so much for a commitment to freedom.

Economic freedom is a major component of what we mean by being free. The authors of the report use the data in the Economic Freedom of the World annual index as their measure of economic freedom.

Economists James Gwartney, Robert Lawson and Walter Block defined economic freedom as when individuals acquired property “without the use of force, fraud, or theft, is protected from physical invasions by others and they are free to use, exchange, or give their property as long as their actions do not violate the identical rights of others.”

Economic freedom, including the protection of private property, cannot exist without the rule of law. As John Locke explained, a society ruled “by law, not men” implies that laws apply to everybody, including the authorities; and that they be publicly known and understood, and that they limit the arbitrary decisions of rulers. The rule of law also embodies the concept of due process and protection of the rights of the accused.

The right to life and safety from physical aggression by others is fundamental to having liberty. The right to travel is a basic human freedom, and governments that try to restrict it deny their citizens the ability to maximize their opportunities and engage in peaceful activities of their choosing.

Free societies respect the right of individuals to practice a religion of one’s choosing, providing it does not restrict the rights of others to practice different religions. The freedom to associate and assemble peacefully, including the right to establish political, commercial, or other organizations, is key to a free and civil society.

The Human Freedom Index attempts to measure each of the above and many other components of human freedom. By the very nature of the topic, it contains subjectivity in both the items to be measured and the weighting of each of the items. The Index is also somewhat restricted by both the availability and timeliness of solid data of each of the components.

Few would argue that the top 10 ranked countries are much freer than those in the middle or at the bottom. Hong Kong comes in at number 2, yet it is not a democracy. It is still governed by the basic law — which protects most civil and economic liberties — until China regains full control.

The authors have provided a real service in fostering the debate about what it means to be free, and which jurisdictions provide the greatest and the least freedom. 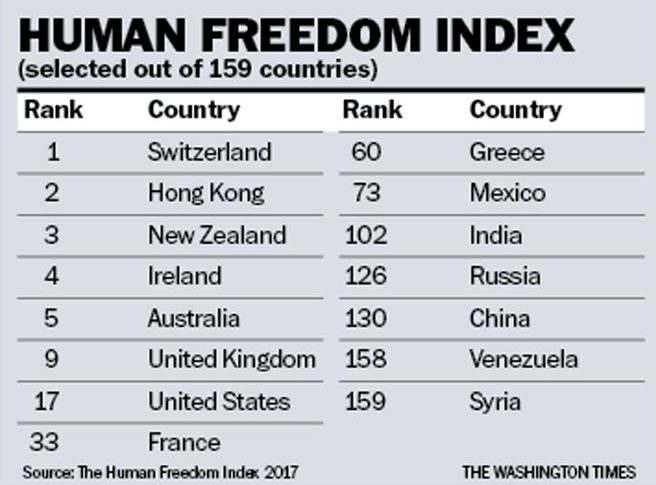 Richard W. Rahn is Chairman of Improbable Success Productions and on the board of the American Council for Capital Formation.