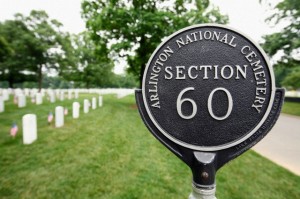 I thought about a graveyard

At the bottom of the sea

Of unmarked graves in Arlington.

No, freedom is not free.

Freedom is not free. Freedom is the goal. War is its means. And war extracts a terrible and treasured price. In his famous address delivered on Memorial Day 1895 at Harvard University, Oliver Wendell Holmes, Jr. spoke (http://people.virginia.edu/~mmd5f/holmesfa.htm). He spoke of the faith of soldiers – in themselves, their leaders and their country. A year earlier he had talked of how in his youth “our hearts were touched with fire.” In 1895, thirty years after the end of the War, he had no illusions about an eternal peace on earth. With observations that ring with relevance today: “War, when you are at it, is horrible and dull…I hope it may be long before we are called again to sit at that master’s feet. But some teacher of the kind we all need. In this snug, over-safe corner of the world we need it, that we may realize that our comfortable routine is no necessity of things, but merely a little space of calm in the tempestuous streaming of the world…Out of heroism grows faith in heroism.” It is a message that indeed has relevance for today.

After graduation from Harvard, Justice Holmes served in the Massachusetts 20th from 1861 to War’s end in April 1865. He was wounded three times: at Ball’s Bluff, Antietam, and Chancellorsville, concluding his service with the rank of Captain.

Originally called Decoration Day, for the flowers that were laid on newly dug graves in 1864, the day soon became a national holiday. May 30th was selected, as it was deemed the optimal date for flowers to be in bloom. In 1882 the name was changed to Memorial Day. When I was growing up, in the late 1940s and early 1950s, Memorial Day was a celebration of American exceptionalism whose duty was to uphold freedom throughout the world. Soldiers, who marched then to the accompaniment of a fife and drum corps and high school bands, were young veterans from the Second World War and grizzled veterans of the First. Riding my bicycle, as I accompanied them to the Grove Street Cemetery in Peterborough, a surge of pride brought lumps to my throat. They still do, as much smaller cadres of soldiers march and ride in Old Lyme’s Memorial Day Parade.  They were and are reminders of the incalculable debt we owe to those who gave so much that we can live freely and securely.

In 1968 the date was moved to the fourth Monday in May, allowing for a three-day weekend. We do gain something when holidays are thus moved, but we lose the intensity of and some of the reason for the celebration.

Over the past few years it has become habitual (perhaps becoming traditional) for my oldest son and his family to join Caroline and me in Old Lyme for Memorial Day weekend. Children and grandchildren are reminders of the continuum of life – that while we live in the present, we must be reminded of those that came before and those that will follow. Memorial Day is a fitting holiday for families. Television and the internet have changed the relationships between soldiers and civilians. Vietnam was the first war brought into our living rooms, and the country’s attitude toward war was forever changed. My grandchildren are too young to recognize both the horror and honor that war bestows. But observing them watching real soldiers make their way up Lyme Street to the Duck River Cemetery, I pray that the same chills I felt more than sixty years ago will tingle their spines – that they will recognize that sacrifice is a gift from people just like them.

In his Memorial Day speech at Harvard in 1895, Justice Holes concluded his remarks with the thought that part of the soldier’s faith is, having known great things, to be content with silence. He then quoted lines sung by a “warlike people” along the Danube:

“For the spring has come and the earth has smiled,

And the dead must be forgot.

Then the soldier spake from the deep dark grave”

It is well that soldiers be content with silence, but it is not proper that we, the beneficiaries of their sacrifice, should do so as well. No matter which day we celebrate the gift of freedom they gave us, and no matter what we call it, remembrance of the fallen is something we should all honor.

The views expressed on AustrianCenter.com are not necessarily those of the Austrian Economics Center.
hayek_admin2019-01-14T06:46:17+01:00