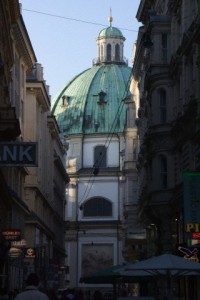 Ludwig von Mises and Joseph Schumpeter are the most famous economists trained by the older Austrian School, although generally Schumpeter has received the lion’s share of attention.[1] This is especially true, for example, in the field of entrepreneurship. To this day, the term entrepreneurship is almost synonymous with Schumpeter, whose fame was built on the success of his Theory of Economic Development (1911) and Capitalism, Socialism, and Democracy (1942). In particular, the 1911 book defined much of the theoretical framework for entrepreneurship research in economics for decades to come. Unfortunately, it also overshadowed numerous other economists in the Austrian tradition who were writing about the entrepreneur at the time, including Herbert Davenport, Frank Fetter, and Viktor Mataja. I’ve argued in a recent paper that Mises too has been unduly neglected, as he was already beginning to think seriously about the problems of entrepreneurial calculation and judgment in The Theory of Money and Credit (1912).

While plenty has been written about the theoretical differences between Mises and Schumpeter (for example here and here), I want to comment on their personal relationship. We don’t have a great deal of information about their interactions over the years, but we do have a few intriguing hints regarding how they felt about each other. What is most interesting is that despite serious differences on economic issues that endured throughout their respective careers, they seem to have been reasonably friendly, especially in their Vienna years.

The two presumably met at the University of Vienna, where both participated in Böhm-Bawerk’s seminar. Although they drew on different economic traditions in their own works, they shared common research interests, and each showed a certain amount of respect for the other’s early work. In fact, as late as 1933 Mises described Theory of Economic Development as one of the top four German-language contributions to economics.[2] In turn, Schumpeter applauded The Theory of Money and Credit, saluting “its ‘power and originality,’ [and] noticing that ‘as usual’ the critics had overlooked these qualities in their discussion of unsubstantial side issues.”[3]

They continued to interact as each played a role in trying to solve the wartime economic problems of the Austro-Hungarian Empire, serving in various public offices or policy committees. To take one more public example, in 1916, after returning from his military service, Mises took part — at Schumpeter’s invitation — in a debate on monetary policy held by the Austrian Society for Politics. Schumpeter, as host of the debate, emphasized the need to avoid wartime inflation. Mises added his own cautions about the negative effects of foreign exchange controls.[4] This sort of interaction continued for a number of years, including during Schumpeter’s brief tenure as Austrian minister of finance in 1919.

Another fact that may not be well-known is that Schumpeter attended Mises’s famous privatseminar. At the time, due to the intellectual milieu fostered by the German Historical School, the Mises circle was one of the few places in Viennese academia where discussions of economic theory were welcome. Simply being theoretical economists apparently constituted enough common ground to continue to bring the two together, despite their significant methodological and theoretical differences. On one occasion, Schumpeter even wrote to Mises to apologize for having to cancel his appearance, commenting that he had very much wanted “to speak to our circle and graze in congenial company on a theoretical meadow.”[5] Typical Schumpeterian prose!

However, unlike many of the other Austrian economists who emigrated from Vienna (many of whom were his students), Mises worked in relative isolation from his former colleagues after arriving in the U.S. Economists Fritz Machlup and Gottfried Haberler, for example, remained friendly with him, but had in many respects moved on from Mises’s early influence. Interestingly, both remained in close contact with Schumpeter until the latter’s death in 1950. The only interaction Mises and Schumpeter seem to have had in the U.S. occurred at Harvard, where Schumpeter was professor during the last decades of his life. Mises and his wife Margit visited when Mises was invited to lecture, and while staying they had lunch at Schumpeter’s house. Margit von Mises remembers the meeting:

On December 5 we went to Cambridge, where he delivered a lecture at Harvard’s Littauer Hall, arranged for him by his brother Richard, who since 1938 had been professor of mathematics and aviation at Harvard. During our stay in Cambridge I met, for the first and only time, Professor Joseph A. Schumpeter, who had just been married for the third time. His new wife was an elegant and intelligent American. They kept a lovely, well-run home. The discussion at lunch was lively but careful, both men aware of their parts as host and guest. Schumpeter knew of course that Lu did not agree with many of his views.[6]

It seems that by this time, the differences between the two men had grown significant enough to cool their friendship, although as Margit intimates, there does not seem to have been any hostility, only a silent acknowledgment of differences. For his part, Mises seems to have been disenchanted with Schumpeter, especially after his business and professional failures. Margit also relates this story from Mises’s days at NYU:

One night in his seminar, Lu was commenting on the late Professor Schumpeter. “There are many people,” he humorously disclosed, “who stand steadfastly by the social doctrines of Professor Schumpeter. They do not seem to remember that when the great professor was minister of finance he was not able to protect Austria against the most disastrous inflation in its history and that, when the great professor was president of a bank (Biedermann Bank), the bank failed.”[7]

Mises attributes Schumpeter’s professional difficulties to his underlying economic doctrines,[8] which had developed in ways Mises must have found increasingly frustrating. After all, Schumpeter had argued for the feasibility (in fact, the inevitability) of socialist planning in Capitalism, Socialism, and Democracy, and his business cycle theory was very different from that developed by Mises and Hayek in the interwar period (Mises in fact makes a number of critical comments about Schumpeter throughout his works). In this sense, it is not surprising that the two men should have drifted apart in their later years.

There is some irony in tracing the career paths of these two men. While the less-famous Mises profoundly influenced the relatively small Austrian School, the more-famous Schumpeter, for all his influence in the social sciences, did not inspire a school of thought as such, or a distinct approach to economic theory. Instead, when asked once why he had never attempted to found a “Schumpeterian school of thought,” he quipped, “only fish swim in schools.” On the other hand, although Mises did not found the Austrian School, his work continued the tradition started by Menger, and has remained highly influential for recent generations of Austrian scholars, many of whom regard his work as fundamental. This is a testament to the power of his ideas, as well as his status as one of the great system-builders of economics.

The views expressed on AustrianCenter.com are not necessarily those of the Austrian Economics Center.
hayek_admin2014-02-10T09:43:33+01:00