Government, the Unsolicited Nanny of Europe

One of the duties of the state, it is commonly said, is to protect the citizens living within its borders. But how far should a government go in order to protect us, before its over-regulation leads to absurdity? It is very questionable if prohibiting Happy Hours in pubs is going to improve our health. Sadly, the tendency of regulating every aspect of our lives seems to be a growing fashion among European countries. They even will go as far as banning free refills of sugary drinks to keep us safe from ourselves.

Since 2016, EPICENTER, led by Christopher Snowdon from the Institute of Economic Affairs and with partners from all across Europe – including our friends from the Hayek Institute, analyze and rank the best and worst places in the European Union to eat, drink, smoke and vape freely. The so-called Nanny State Index consists of three equally weighted categories (food & soft drinks, alcohol, and nicotine) which are then divided into subcategories analyzing different factors such as taxation, selling restrictions, prohibitions on advertising, among others. With each of these restrictions to make ones own choices in place, the score for a country increases, and thus, makes the country more unfree. 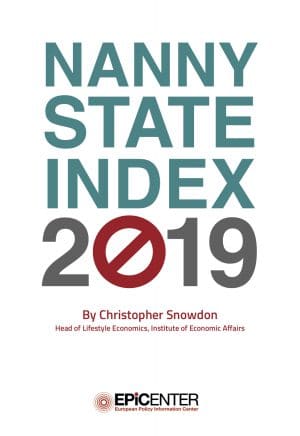 In the 2019 ranking, which has been released on April 30, Finland has the highest score in Europe, which means it is the government on the continent which is most inclined to try to be the people’s “nanny.” Lithuania and Estonia round out the “top three” due to their heavy paternalistic regulation on all of the three categories. The implementation of regulations can be observed not only at the top of the table but also among countries which used to hold very liberal policies in the past. The Czech Republic, considered the best country for drinking, smoking, vaping and eating in the past, has since introduced an extensive smoking ban. The decline of the Czech Republic has turned Germany as the freest country in the 2019 edition. Germany, with no nanny state policies on food and soft drinks (apart from a voluntary agreement with industry to reformulate food products), scores the least in all categories.

The paternalistic policies have a direct impact on consumers’ life, raising the cost of living and hurting poorer households the most. Excessive regulations and over-deterrence do not have a clear impact on the health of consumers, but in the meantime causes black markets and bureaucracy to flourish.

The index shows that there is no substantial correlation between paternalistic policies and life expectancy. The countries with the highest life expectancies in Europe are Spain, Italy, and Luxemburg, countries that are well ranked in the index for not having too many regulations in place. What does lead to an increase in life expectancy and in an individual’s quality of life? The Nanny State Index clearly responds to this question: there is a strong statistical relationship between health and wealth, which suggest that pursuing economic growth would have a greater impact on citizens’ lives than implementing coercive policies.

Instead of choosing the path of coercive policies, governments should focus to guarantee more economic freedom in order to ensure an increase in the wealth of its citizens rather than treating them like children.

Juan D. Estevez is an intern at the Austrian Economics Center and studies political sciences and business administration at the Goethe University in Frankfurt.