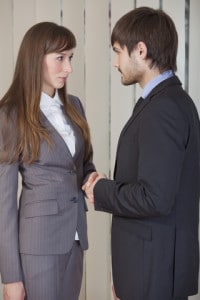 Yesterday was “National Equal Pay Day,” one of those silly appellations that are applied to an increasing number of otherwise blameless days. In this case, responsibility goes to the National Committee on Pay Equity (NCPE). The concern is the gap between pay for women and that of men for “similar” work. Besides the difficulty in defining “similar,” there are also the questions of performance, risks and hours worked that any employer must consider when thinking about pay. Nevertheless, the commemoration of days such as this are celebrated more for the political good they afford needy politicians than for the betterment of society.

Democrats up for re-election are particularly needy as they face what could be a gray November. The economy is limping along. ObamaCare may have signed up 7.1 million people, but 6 million lost coverage in the process, so net sign-ups are not very impressive. (As an aside, it would be interesting to know what we taxpayers spent in software and advertising expenses to sign up a net of 1.1 million people.) Overseas, we have created a mess, from the Middle East to Ukraine to the East China Sea. We have apparently abandoned the principles of the Monroe Doctrine. “Without the United States in the lead,” as Victor Davis Hanson wrote recently, “the world cannot remain the world as we have known it since 1946.” Scandals have rocked this Administration, bringing comparisons of “If you like your doctor, you can keep your doctor” Obama to “I’m not a crook” Nixon.

So what is Mr. Obama to do? As they face re-election, no candidate wants him by their side. So the President resorts to familiar and proven issues, those that poll well and serve to fire-up Democrats’ base – same-sex marriage, pre-school, child care, family leave and pay equity.

The original Equal Pay Act was signed into law in 1963 by President Kennedy, but that proved inadequate to politicians who consider having to pay for birth control to be a violation of a woman’s rights. So in 1996 “National Equal Pay Day” was born. It comes on a Tuesday, because it represents how far into the work week women must work in the next week to earn what men made the previous week. Yesterday, Mr. Obama signed an executive order barring federal contractors from penalizing employees who discuss their compensation. (Will that EO apply to union leaders from docking a member who complains about using his dues to pay for politicians antithetical to his beliefs?) The President also signed a memorandum that will require contractors to release salary summary reports broken down by race and gender. Quality of work performed, to this White House, is obviously of less importance than measurements of equality.

What gets lost in this miasma of insufferable verbiage is that no two people perform the same job exactly the same. If a man and a woman are hired out of business school by the same company and in the same department, yet the woman proves more effective than her male counterpart should she be punished by having her pay level set at that of her underperforming compatriot? On an assembly line, if a woman proves more adept at performing her job, should she be held back? If a man and a woman hold “similar” jobs, but he puts in more hours, should he be penalized?

It is a silly and, in fact, demagogic argument that is potentially harmful to employers and divisive to the people. Mr. Obama’s executive order is a gift for trial lawyers, as the burden of proof, in an accusation of unfair pay, falls on the employer, not the employee. So we can expect, as has been true in the past, wealth to transfer from corporate coffers into the already gold-laden pockets of trial lawyers.

Mr. Obama is fond of telling us that we live in the 21st Century. Businesses today compete globally, and must keep an eye on the bottom line. For-profit businesses, including those who contract with governments, are motivated by – surprise – profits. Without profits they would go out of business, which would result in employees, regardless of gender or race, being out of work. Consequently, managements look for efficiencies in plants, factories, offices and stores. Their purchase departments strive to get the best bargains. Human resource departments are charged with attaining benefit packages that satisfy employees without overburdening the corporation. Tax lawyers are paid for their ability to navigate the maze that is the tax code. And they hire the people they believe are best qualified for the jobs – individuals who can either save the business money or generate the most profitable revenues. Their motivation is profit, not social justice. It can be no other way. When considering future employees and compensation, race, creed or gender pale in comparison to the qualifications of the individual to be a profitable contributor.

Government bureaucracies and eleemosynary institutions do not have the same motivations. Social justice may be part of their mission. But for government to force private businesses to apply redundant standards is both unrealistic and ultimately risky to government, which depends on a robust private sector to pay the taxes on which government feeds. Not-for-profit organizations would go unfunded. I say redundant, because, as the Bureau of Labor Statistics (BLS) reports, single women who have never married made 96% of men’s earnings in 2012. Risk is another factor. Ninety-two percent of work related deaths were to men. It is redundant because the Equal Pay Act of 1963 made discrimination in pay a criminal offense.

If there were such a thing as equal performance in equivalent jobs, I would be in favor of equal pay. But there is not. Common sense takes a back seat to the brainless advocates who argue for equality of outcomes. In their 2012 book, The Declining Importance of Race and Gender in the Labor Market, June and David O’Neill argue that nearly all the 23% raw gender pay gap can be attributed to factors other than discrimination.

In their desire to gain political advantage, regardless of the cost to truth and civility, advocates for equality in outcomes tend to harm the most productive. It was interesting to watch the squirming of White House Press Secretary Jay Carney when confronted with the fact that White House female staff members make on average $0.88 for every dollar male staff members make. The fact that they do only proves my point – pay is not gender based, it is determined by the job one does. When Mr. Carney mentioned that those with similar jobs all made the same, he was either lying or telling us that the White House uses income to further political agendas, which is believable, but I suspect unlikely. Looking at a chart printed in Tuesday’s New York Times (page A14) it would appear that the former is more likely than the latter – different jobs pay different rates and pay is based on ability, the specific job and hours worked. Of the 237 lower paid White House staff (those below $70,000), 54% are women. Of the 136 higher paid (above $100,000), 46% are women. Is that fair? I am no judge, but I assume that Mr. Obama thinks it is. Mandating equality of outcomes cannot be done. Efforts to do so tend to push people toward the lowest common denominator. The White House cannot afford such outcomes and neither can businesses or not-for-profits.

The whole issue is a political football designed as a red herring – to keep the eyes and ears of probing reporters from looking into scandals, like the IRS, Benghazi and Fast and Furious, which are far more serious. In a world of robots, pay could be equal as each machine could be programmed to do exactly what its mate does. But that sort of thinking doesn’t work in the world of humans, a fact that the White House recognizes, even if Jay Carney is not permitted to say so.

What I do favor is the best pay for the best performance, regardless of race, gender or creed. As such, pay and outcomes will never be equal, but opportunities should always be.

The views expressed on AustrianCenter.com are not necessarily those of the Austrian Economics Center.
hayek_admin2014-04-10T08:58:56+02:00