NATO at 70: A Peacemaker in Search of Meaning

The North Atlantic Treaty Organization (NATO) is celebrating its 70th anniversary on April 4. In our new study NATO After 70 Years: A Peacemaker in Search of Meaning, we take a look back at the legacy of the alliance and where it is heading in the future. Download the study (including sources) or read it below:

A Success Story of Peace in Europe

The North Atlantic Treaty Organization (NATO) was founded at a precarious point in history. When on April 4, 1949 – 70 years ago, the North Atlantic Treaty was signed, World War II had ended just a few years earlier. Two of the most evil ideologies the world has ever seen – Nazism and Communism – had reared their ugly heads in Europe for a big chunk of the twentieth century, as tens of millions of people fell prey to war and disease, but most of all, to totalitarian regimes trying to create a superhuman race (or a classless society for them, the rulers) at the expense of everyone else. This murdering on a gigantic scale would continue East for several more decades.

Yes, Nazism was defeated. But Communism was not. Indeed, the socialist ideology would be expanding in the coming years to more parts of the world outside the Soviet Union. Eastern Europe was already on the wrong side of the Iron Curtain. But the situation was dire for Western Europe, too. As Gary Schmitt writes, the part of Europe that was free was still “economically on its knees, politically unstable, and with its various militaries demobilized,” and was facing “a Stalin-led Kremlin with a still-massive Red Army that was in an increasingly dominant position in Central and Eastern Europe.” The outbreak of the Korean War in 1950 was the final straw and would ultimately set the group of NATO members on course for a true defense alliance.

The goal of NATO was often summed up in its early stages as “keeping the Soviet Union out, the Americans in, and the Germans down.” This meant, as Matthew and Mark Cancian explain, that, first, “the alliance would block the Soviets moving further west,” second, “tie the Americans to Europe to prevent disengagement” and, third, “prevent the Germans from becoming militarily aggressive as had happened twice before.” NATO achieved all of these goals. From this point of view, “the alliance succeeded brilliantly.”

Indeed, NATO in these decades can be considered as nothing short than a major success, as Western Europe and the U.S. prevented the Soviet Union from invading countries on the western end of the Iron Curtain, thus setting up a Europe which would flourish economically and enable freedom for its people for many decades – one might say, until today. Indeed, while Europeans often claim today that the European Union brought peace to Europe, it can be said that while the EU surely played a role, NATO and the presence of the U.S. had a much bigger effect.

Even after the mega-state in the East eventually failed and the Iron Curtain fell, the defense alliance found new ways to adjust to new challenges, despite its main objective – the fight against Soviet Communism – not existing anymore. By expanding eastward in the early post-Soviet years, NATO “provided the material and behavioral ground for the larger liberal order in Europe to emerge.”

After all, the years after the fall of Communism were still very unstable years for Eastern Europe. But having the possibility to join NATO – and thus being incentivized to implement liberal reforms, made it easier for those countries to build a free and sustainable future with “stability and democratic norms.” Indeed, writes Mark Rice, “the security NATO has offered these states has given them the room to prioritize internal reforms over confronting external conflicts.” This even included a reunified Germany, which was far from being considered a stable and non-aggressive liberal democracy when the eastern part would unite with the west.

Therefore, in the Soviet era and the years after, NATO, while far from being perfect, had “successfully contained one of the deadliest ideologies ever conceived and then played a major role in the return of some 100 million people in Central and Eastern Europe to democracy, markets, and shared prosperity,” as Dalibor Rohac notes. 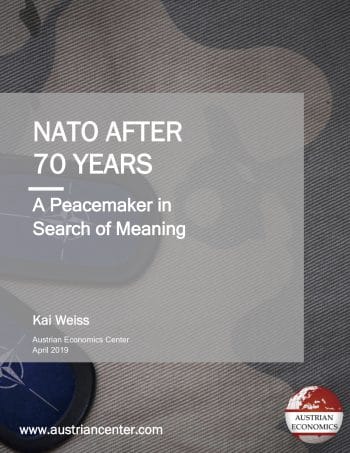 Despite that, criticism has been mounting ever since. As NATO has moved on from the Soviet threat and the early expansionary moves in which it excelled, it has embarked on new expansionary measures which have instead led to disaster. These expansions are two-fold and have made NATO much more than merely a defense alliance.

Intervening in Others’ Affairs

For one, NATO has more frequently become actively aggressive in its global role. In 1995, it set off on its first military intervention and has been active in places like the Balkans, Afghanistan, and in more recent years, Libya, by using hollow reasons such “peacekeeping” missions or the “War on Terrorism” to intervene in foreign affairs. These efforts, which have been mostly spearheaded by the U.S., have had little to do with defending NATO member states and only affected distant countries. Even on its own merits – bringing the same peace and liberal values that the West is enjoying to those countries, this approach has been failing most often. In any case, a defense alliance which is supposedly only, as the word says, defending a territory, should refrain from such interventionist approaches, or else will be in danger of truly becoming what the Campaign for Nuclear Disarmament has accused NATO of: “an interventionist, expansionist, military club.”

Russia’s annexation of the Ukrainian peninsula Crimea in 2014 has been the most significant geopolitical event on the European continent itself in the last years and is largely seen as a response to NATO’s consistent attempts to expand further and further east. While this can surely be seen as a kind of “Russian paranoia,” the expansion process after the early post-Soviet years has become often chaotic, hectic, and certainly unnecessary and destabilizing. NATO has admitted – and is continuing to admit, countries that are fragile, are missing stable liberal democratic institutions, and reek of corruption. In addition, a clear benefit of introducing these new members to the club is often missing for existing members. As Walter McDougall notes, simply increasing numbers should not be a goal in itself: “unchecked inflation is often a symptom of institutional senility rather than vitality.” Next to cornering Russia, the latest expansionary attempts have rather weakened the alliance.

NATO In the Age of Trump

“I think NATO’s obsolete. NATO was done at a time you had the Soviet Union, which was obviously larger, much larger than Russia is today. I’m not saying Russia’s not a threat. But we have other threats. We have the threat of terrorism and NATO doesn’t discuss terrorism, NATO’s not meant for terrorism. NATO doesn’t have the right countries in it for terrorism. And what I’m saying is that we pay, number one, a totally disproportionate share of NATO. We’re spending the biggest, the lion share’s paid for by us, disproportionate to other countries.”

No other political leader has influenced the debate around NATO and its future as much in the last years as U.S. President Donald Trump. Most of the discussion has been surrounding the defense spending of NATO member states. About three-quarters of the alliance’s total spending on the military is coming from the U.S., and of the 29 members, only four – Greece, Poland, United Kingdom, and Estonia – are fulfilling the NATO’s own two-percent-of-GDP military spending criteria.

For the U.S., this is a problem, as it feels as though (and is quite correct in this feeling) that it is financing the entire alliance’s defense. At the same time, however, Europe has evolved: almost three decades have passed since the end of the Cold War and the fall of the Soviet Union. McDougall writes that “nothing resembling the threat of Josef Stalin’s empire and Red Army exists today and Europeans are well aware of that … Germans, French, and Ita