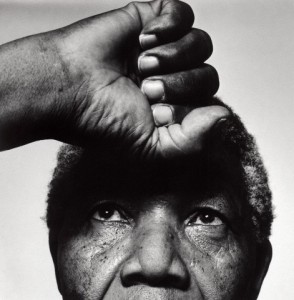 Nelson Mandela never considered himself a saint. He did not want to be put on a pedestal. In 1994, John Carlin of the London Independent asked the newly elected Nelson Mandela if he were a saint. Mr. Mandela responded: “Well, it depends on your definition…Some people have said a saint is a sinner who keeps on trying. From that angle, you may classify me as a saint, because I have many weaknesses.”

It is curious that so many journalists and politicians (including President Obama) made such a point of saying that Mr. Mandela was not a saint. Did they really think he might be? Did they think that the people believed he was? Did they fear they would be seen as worshipping a man, instead of celebrating his life? Holiness and sanctity are not characteristics Mandela would have assigned himself. He fought the ugliness of apartheid, which had deprived millions of blacks of their inherent rights, and imprisoned and murdered thousands more. He spent twenty-seven years in jail, but the years did not leave him embittered. On his release, he found reconciling differences with South African president Frederik Willem de Klerk and the National Party more effective than confrontation.

After winning the presidential election in 1994, he named Mr. de Klerk his deputy. In 1993, the two men shared the Nobel Peace Prize. Mr. Mandela was able to transcend the violence of the Umkhonto we Sizwe (MK), the militant wing of the African National Congress (ANC), which he had co-founded in 1961. In prison he had undertaken the study of Afrikaans, the language most associated with apartheid, because he felt one must be able to communicate with one’s political foes. These were the things that made Mr. Mandela an exceptional human being – perhaps not characteristics that cause one to be canonized, but as close as it gets in politics.

The struggle to overthrow apartheid was a legitimate, revolutionary struggle. In 1980, non-whites composed about 84% of the population; yet they were unable to own land and vote. South Africa is richly endowed in natural resources, yet the majority of the population could not benefit. While blacks make up the majority of the population, the nation is truly polyglot. In a nation of 53 million, eleven languages are officially recognized with Zulu, Xhosa and Afrikaans being the three most prominent. English, the first language of about 10% of the population, is the language of commerce. Today, blacks make up about 80% of the population, with whites and those of mixed races roughly dividing the balance. Among the blacks, Zulus and Xhosas are the largest groups; others include the Pedi, Sothos Tswanas and Hottentots, each with their own language and customs. The white population is divided between those of British heritage and the Afrikaners who are descended from Dutch, German and French settlers.

In the 1950s, Mr. Mandela joined the ANC and their bid to rid the nation of what was legal racial segregation, known as apartheid. Besides being a member of the ANC at the time of his arrest in 1962, the forty-four year old Nelson Mandela was a member of the then underground African Communist Party, including being a part of the Party’s central committee. At his trial and conviction in 1964, Mr. Mandela never disavowed the tenets of the MK. He chose not to plead “not guilty” or to seek clemency. It was this clear enunciation of principle that labeled him a terrorist and which made him a political prisoner. (Ironically, he was only removed from the terrorist watch list in 2008.) It was also what made him a symbol of the anti-apartheid movement.

In 1962, Mr. Mandela was sentenced to life imprisonment, in particular for his role in organizing the bombings of police stations. It was in prison that he came to appreciate the concept of reconciliation and redemption. His cell on Robben Island, filled with books and manuscripts, was said to have had a monastic spirit. Like Gandhi, who also had practiced law in South Africa, Mr. Mandela became determined to appeal to the conscience of whites. Gandhi was recognized as the figurehead of Indian independence before arriving there. Likewise, Nelson Mandela became the voice of a free South Africa while still in prison. Reconciliation was imperative, not just between blacks and whites, but between ethnic tribes, particularly between the two majorities – the Xhosas (Mr. Mandela’s heritage) and the Zulus (the tribe of the current president, Jacob Zuma.)

What all revolutionaries have in common is a hatred for oppressive government. It was true in England in 1642, in the American colonies in 1776, in France in 1789, in Russia in 1917, and in other places from China to Brazil, from Cuba to South Africa. But what is striking is that the only truly successful revolution was the one in the American colonies – successful in the sense that the revolutionaries were able to quickly adapt a democratic form of government based on republican principles. More typically the vacuum created by the destruction of an existing despotic government was filled by another tyrant, as happened in France, the Soviet Union, China and Cuba. England evolved slowly toward a more liberal government. Yet, incomprehensibly most revolutionaries look to communist nations for help and inspiration – countries with governments as oppressive as the ones that were overthrown. It suggests that the leaders of most revolutions seek power for themselves, not liberty for the people.

But not Mr. Mandela. Following his release from prison in 1990, Mr. Mandela visited the United States. In a speech before Congress he spoke of the American dream, “of liberty for all…without regard to race, color, creed or sex…To deny any person their human rights is to challenge their very humanity.” While Mandela was still in prison, and with economic sanctions being imposed by the United States on the South African regime then governed by the apartheid Pieter Willem Botha, President Ronald Reagan demonstrated his personal views of apartheid. He named a black career diplomat, Edward Perkins, as ambassador to South Africa. Juan Williams recently wrote in the Wall Street Journal: “The American civil-rights movement particularly intrigued him [Nelson Mandela], because the racial dynamics in the U.S. were a reversal of those in his country, where the black majority population was oppressed by a white minority.” It was the non-violence of men like Martin Luther King and Mahatma Gandhi that Mandela saw as examples to emulate.

It was Nelson Mandela’s journey from angry young man to statesman that needs to be told, and which should be seen as an example for myriad African nations, as they emerge from European colonies to free and independent states. Unfortunately, the paths for most nations have been paved with repression, retribution and tribal warfare. It was a love for his country and the belief that liberty was universal and was a right of all free people that drove Nelson Mandela, or Madiba, as he liked to be called. In an act reminiscent of our first president, Mr. Mandela voluntarily gave up the office of president after one five-year term.

Unfortunately, Nelson Mandela’s legacy has been less munificent. He left the office of president in 1999 and was followed by three other men, all representing the ANC. The economy is suffering. Unemployment in the 3rd quarter of 2013 was 24.7 percent. The murder rate is one of the highest in the world at just over 30 per 100,000, about four times higher than that in the United States. Violent crimes, at more than 1,600 per 100,000 are more than three times that in the U.S. and one of the highest in the world. Corruption flourishes and was the reason that President Zuma was booed at the memorial services for Nelson Mandela earlier this week. While Mr. Mandela was a remarkable man, one who only comes our way rarely, one wishes he had the good fortune, as George Washington did, to be followed by the likes of an Adams, Jefferson, Madison and Monroe. By the time James Monroe completed his final term in 1825 – the last of the founding fathers to become president – the United States was thirty-six years old. Its future was assured.

Nevertheless, Nelson Mandela was a man deserving of the celebration that the 100 current and former world leaders gave him earlier this week. He showed that reconciliation works better than confrontation. Amazingly, he included white guards at Robben Island among his friends. He left behind the anger that drove him as a young man, and his humility allowed him to know that power resides in the people, not with a single person. He may not have been a saint, but he was a man deserving of our respect and admiration. He was a good man. How fitting that we should celebrate his life during the Christmas season! His life was one that other political leaders in South Africa and around the world would be wise to emulate.