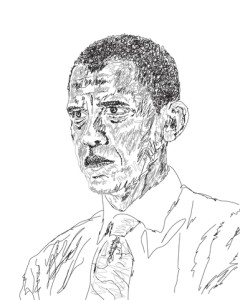 Mr. Obama came to the Presidency five and a half years ago with the promise for great expectations. He thrilled his followers with his siren call for fairness, of cleansing the atmosphere, beautifying the earth and rolling back the seas. He would bring peace and goodwill to all mankind…and he would provide free contraception for women, whether they wanted it or not. His message was one of unifying a people grown divided by seven years of a war against terrorism that many felt, including most of the media, had been waged based on lies told by the Bush Administration. Then, the Bush years ended with the near-collapse of the financial system, conveniently and comfortably nestling into Mr. Obama’s ideology that sees capitalism as evil and government as good.

People saw an intelligent, articulate, good-looking young man who exuded confidence, and who bore a hint of the exotic in both his name and heritage. They saw what they wanted to see, and the media was circumspect in terms of not delving too deeply into his past. Truth be told, no one really knew the man we would elect to become President.

Now, five and a half years on, we are more polarized than ever. Negativism fills the air. The economy, instead of rebounding from a steep recession, has swum haltingly back. Despite recent robust employment numbers, the civilian labor force participation rate, at 62.8%, remains at record lows. In spite of promises to end wars and renew bonds with the Muslim world, the world has become more dangerous. Yet, we have scaled back our overseas military commitments and watched our enemies become bolder. The consequence is a reinvigorated Russia, a more aggressive China and total mayhem in the Middle East, with Syria in civil war and Iraq likely to collapse.

The Executive branch has assumed (or is attempting to assume) unprecedented powers, especially the EPA, IRS and HHS. Fortunately, we live in a country in which government is comprised of three equal branches. In its ruling last week, in National Labor Relations Board v. Noel Canning, The Supreme Court ruled 9-0 that Mr. Obama had overstepped his legal authority. It was at least the 4th time the Supreme Court has unanimously ruled against the Administration. While he has unilaterally promised to fix immigration, a recent Gallup Poll found 69% of the people disapprove of his approach, including 40% of Democrats. Given his arrogance, his preference for expensive vacations and the company of sports and entertainment celebrities rather than political friends or foes, it is unsurprising that a recent Quinnipiac poll found Mr. Obama to be the worst President in the post-War years – worse than Nixon, Carter or George W. Bush! That is an incredible finding for a sitting President – a stunning condemnation of a man once adulated by his followers. Remember the New Jersey elementary school teacher who had instructed her young charges to sing paeans of praise to Barack Hussein Obama?

The contrast with previous eras is stark. In the 1980s, following a decade that included a President forced to resign, soaring gasoline prices, a stock market meltdown, a severe recession – the worst since the Depression – and the highest inflation in a hundred years, Ronald Reagan brought “morning to America.” Employment soared, as did wages. Markets rallied at that time, but they did so because of an improving economy, not because of a Federal Reserve forcing down interest rates. In the early 1960s, a citizenry, rejuvenated with the energy, youth and aspiration of John Kennedy, made it possible for a man to walk on the moon in less than ten years. We will celebrate later this month the 45th anniversary of Neil Armstrong’s famous stroll along the moon’s surface – “One small step for man, one giant leap for mankind!” If Neil Armstrong came to symbolize Kennedy’s dream for the future, Sandra Fluke has been our nightmarish gift from President Obama.

How powerful, in those bygone days, was our enthusiasm for achieving what seemed the impossible. Civil rights and women’s rights were movements that were critical for a decent society; they required courage on the part of those who led and participated in such movements. Today, in contrast, our goals seem trivial – gays in the military, allowing those high school students, who claim to be transgender, to decide which bathroom to use, the banning of “big” soft drinks. How idle and apathetic we have become. We let arguments turn rancorous and philosophical disagreements to become personal. Instead of being encouraged to give to the nation what they can, youth today are emboldened to take all that is offered.

It is the cultural shift that Mr. Obama represents, which is so alien. His main domestic goal – increasing dependency on government – is reflective of such cultural changes. His model is the European welfare state. But Europe and the United States are far different. Europe, in the post-War period has never had to worry about its defense. They have relied on NATO, which is to say they have relied on the United States. To maintain our position in the world, we must be more vital, more productive and less complacent. We, and the world, cannot have it otherwise. It is not that his goals, which include fairness in the treatment of gays, lesbians and those who are transgender, providing birth control for women and the risks of climate change, are unworthy. But they carry less urgency and are more politically motivated than those of an earlier generation.

In terms of climate change, the President’s adamancy ignores nature’s own indecipherable weather patterns; he gives no credit to improvements in fossil fuel technologies that have greatly reduced carbon emissions; he ignores pollution in other parts of the globe, and he is unconcerned with the adverse economic impact of his mandates.

In equating gay rights with civil rights, Mr. Obama is unfair to those who fought and died for the far greater injustice that deprived African-American citizens of their basic Constitutional rights to vote, assemble and freely share schools, buses and water fountains solely because of the color of their skin. The U.S. Army, for example, never had a special training camp for gay soldiers, as it did for African-Americans. Such training camps existed throughout World War II, and did so until President Truman integrated the Armed Forces in 1948. I know, because my Army basic training took place on what had been the regimental area for African-Americans – the Third Training Regiment, about three miles away from the main base at Fort Dix. Gay rights are a cultural issue; they are not a Constitutional one. Gays have always been able to vote, ride buses, attend schools and own property. Society condemned what they did, and that was wrong and needed correcting. But their suffering cannot be compared to what African-Americans went through. Women’s rights were also affirmed during the 1960s. The Supreme Court’s recent decision regarding Hobby Lobby had nothing to do with a women’s right to work where she chose, to be paid equally for the same job as a man, or be allowed access to birth control; it was solely about who would pay for four specific birth control methods – the individual or the taxpayer. The decision also found that ObamaCare violated the religious rights of those who owned private companies.

Some conservatives have suggested the President is not up to the job, that he was not qualified or competent, or that his demeanor of being “above the fray” suggests a man indifferent to the day-to-day job of being President. In my opinion, that is erroneous and dangerous. It seems to me that Mr. Obama is a very intelligent man who knows exactly what he is doing – attempting to change the culture of America. Less than a week before the 2008 election, then Senator Obama said: “We are less than five days away from fundamentally transforming the United States of America.” The United States is not perfect. Like a fine piece of machinery, it needs regular tuning. But it does not need “fundamental” transformation. Such a comment suggests Mr. Obama believes he knows better than the Founding Fathers and is more sagacious than 200 years of accumulated wisdom.

His Presidency is one of a man who sees an America, as one that should be weaker and unobtrusive overseas, while stronger and more intrusive at home. He wants our allies to assume greater responsibility for their own defense, while he wants people at home to become more dependent on government for their lives and their livelihoods. These are not the goals of an incompetent man. These are the objectives of a man who knows what he wants. It is the culture that Mr. Obama wishes to change. Such words and actions have bred visceral reactions from those like the Tea Party, responses perhaps not well articulated, but which reflect a deep-seated resentment. They understand that Mr. Obama’s goals are inimical to most Americans.

Like a schoolyard bully hurling taunts, while seeking approval from his peers, Mr. Obama blames intransigent Republicans for his inability to get specific legislation passed, such as immigration reform. But that is the way of ideologues. They have an agenda and have no interest in compromise. Mr. Obama, in his first two years, had a willing partner in Nancy Pelosi, and, in his last four years, another in Harry Reid, who has almost single-handedly foiled any attempts at bipartisanship. Now, with the Senate at risk to a loss to Republicans, Mr. Obama has doubled down in his contumacy. He has his phone and his pen – it’s his way or the highway!

To the extent that polls truly represent a people grown concerned of a scandal-filled President whose aloofness and arrogance place him above the fray, then perhaps Mr. Obama will prove evanescent. I hope so. His concepts for governing are derived from the writings of Saul Alinsky, and from mentors like Frank Marshall Davis, Edward Said, Derrick Bell and Jeremiah Wright. They are indeed outside the mainstream of American thinking. But my conclusion that his policies may not have a long shelf life may reflect hope rather than analysis. Nevertheless, it is sad to see this man, the first African-American to be elected and to serve as President, turn against so many of the ideals for which free people have always fought: that governments are instituted among men by the consent of the governed, that government should guarantee our civil liberties and our unalienable rights; but this should be done in a manner that does not foster dependency or shun individual responsibility.

The views expressed on AustrianCenter.com are not necessarily those of the Austrian Economics Center.
hayek_admin2019-01-14T06:16:05+01:00