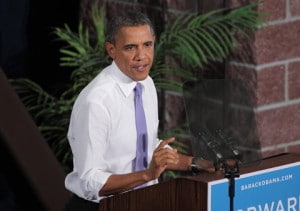 In his 1964 acceptance speech for the Republican nomination, Barry Goldwater said, “Extremism in the defense of liberty is no vice…” In that same speech Mr. Goldwater issued a warning more meaningful to today: “Those who seek absolute power [read: extremists], even though they seek it to do what they regard as good, are simply demanding the right to enforce their own version of heaven on earth…they are the very ones who always create the most hellish tyrannies.”

Seven years later Saul Alinsky, the “father of community organizing” and whose work influenced the young community organizer Barack Obama, published “Rules for Radicals.” Its opening sentence: “What follows is for those who want to change the world from what is to what they believe it should be.” On October 30, 2008, candidate Barack Obama said: “We are five days away from fundamentally transforming America.”

“Radicalism” is defined by Merriam-Webster: “The opinions and behavior of people who favor extreme change, especially in government.” There is no question that what Mr. Alinsky was advocating was extremism. However, during the 2008 campaign only a few “extremists” and “racists” brought attention to the radicals who had influenced Mr. Obama as a young man. Nevertheless, the names and the numbers are legion, and include among others Frank Marshall Davis, Bill Ayers, Tom Hayden, Saul Mendelson, Dr. John Drew and Professor Charles Ogletree.

It could be that Mr. Obama outgrew such youthful indulgences. His attendance, even for twenty years, at Jeremiah Wright’s church, Trinity United Church of Christ in Chicago, does not necessarily mean he believed the hate Mr. Wright preached for America. Nevertheless, the Communist Party campaigned for him in 2004 when he ran for the Senate, and Mr. Obama, in his autobiography “Dreams from My Father,” wrote of the influence of Frank Marshall Davis, a card-carrying member of the Communist Party, during the ten years he mentored him.

In his 2012 book, “The World America Made,” Robert Kagan argued that there is nothing about democracy and the liberal international order it has created that ensures it will survive. Other superpowers have risen and fallen, from the Greek, Roman and Chinese empires to those of Spain, France and England. History suggests that the same fate, at some point, faces America; for it is not written that America will persist eternally. But Mr. Kagan warns that America need not and should not decline by committing preemptive superpower suicide. We remain the richest and militarily most powerful nation in the world. To remain so, he writes, is a choice.

What are Mr. Obama’s goals for America? In his claim that he wants to “transform” the Country, did he mean from one whose power and prosperity he feels have destabilized the world? He has reduced military spending. Nations are in constant geopolitical motion. Europe continues in decline. China, Russia and Brazil are in ascendancy. None of them have the means to threaten the United States, but it is certainly possible that liberal democracies are at risk as authoritarian regimes like China and Russia gain power and prestige. The world has benefitted by trade, and, since 90% of world trade moves by sea, one can conclude that the world has been the beneficiary of America’s control of sea lanes. Should China wrest domination of the South China Sea – through which 25% of world trade moves – will the trade routes be as secure for India and Japan?

Domestically, Mr. Obama divided the electorate and scorned the opposition. Racism has worsened. He ignores laws he doesn’t like. Partisanship in Congress serves his purpose, as it makes that body ineffectual. Mr. Obama has extensively used Executive Orders (EOs) and Presidential Memorandums to enact laws. While he boasts that his use of EOs has been less than his predecessors, he never mentions Memorandums, which are virtually identical, but with the benefit of not having to cite the law on which they are based. The overhaul of the immigration system was done through a Memorandum. The EPA has become a semi-autonomous body, enacting and enforcing laws that have, as the New York Times put it last May, “the chance to transform the nation’s energy sector and, at the same time, his Presidency.”

It begs credibility to believe that Mr. Obama does not represent the extreme left wing of the Democratic Party. He is forced by circumstances, at times, to play down the middle, but his heart and his agenda are elsewhere. It is personal power that motivates extremists. It makes no difference from which side of the political aisle they emerge. Keep in mind, there was little difference between Hitler and Stalin. Those on the right wrap themselves in religion and nationalism; those on the left claim to focus on perceived inequalities and the rights of workers. Both sides are interested in dividing the electorate, finding someone or some group to blame for their failures – for example, the one percent or Jews. Extremists on both the left and the right use red herrings to divert attention from their true intentions – personal power.

It is difficult to believe that a Republican with such a litany of extremists in his or her background would have been allowed to be so casually investigated by the media, no matter his or her race or sex. The Left tend to be credulous, especially when it comes to people who fit their preconceptions of what should be. They want symbols. It is the cover, not the book that interests them. It is condescending. The idea of an African-American President was important, less so the ideas he professed. The concept of a woman President is viewed through the same lens. Conservatives have faults, but they have never been so blatantly obvious, at least in this regard. In 1969, Israel elected Golda Meir as Prime Minister, not as a woman, but because she was the person whose ideas best fit the mood of the people at the time. Ten years later, the same was true in England when Margaret Thatcher was elected Prime Minister. Why can’t Americans look at candidates without regard to race or sex? Criticizing Obama does not make one a racist, anymore than judging Hillary makes one a sexist. Why does the Left find it necessary to bring affirmative action into the electoral process? It is patronizing.

Extremists are most dangerous when they are not seen to be so – when they are not closely scrutinized, and who insidiously and seductively, insert themselves into the mainstream of our political system. I worry that that is what happened with Mr. Obama. Mainstream media, academia, late-night-show hosts, Hollywood and crony capitalists are infatuated with Mr. Obama, with no tolerance for healthy criticism of the man and his ideas. I hope I am wrong. But, as I see it, his wish to “transform” America has incited division, between Republicans and Democrats, rich and poor and Black and White. It has increased entitlements (including ACA), widened inequality and worsened partisanship. Abroad, he has alienated our allies and befriended our enemies. Mr. Obama has elevated dependency and made us less safe. That is his legacy – a consequence of extremism.

The views expressed on AustrianCenter.com are not necessarily those of the Austrian Economics Center.
hayek_admin2019-01-14T06:04:10+01:00