“Obama and His Generals – A ‘Paul Revere Moment?’” 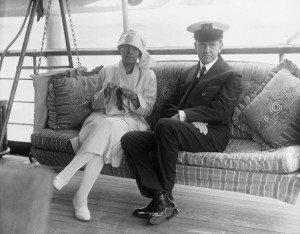 President Coolidge and His Wife

Section 2 of Article II of the U.S. Constitution begins: “The President shall be Commander of the Chief of the Army and Navy of the United States, and of the Militia of the several States, when called into the actual Service of the United States.” Eleven years earlier, in 1776 when he, at the request of the Continental Congress, assumed command of the armies of the Colonies, George Washington recognized his role as being subordinate to that of the civilian Congress. In a speech before the American Legion in 1925, President Calvin Coolidge said: “Our institutions are founded not on military power, but on civil authority…Military power should be subordinate to and governed by the civil authority.”

It is an important power that Presidents have exercised on notable occasions, but almost always for reasons that were militarily based, or because of insubordination. Lincoln fired at least seven generals (including George Meade twice), before he decided on, in March 1864, Ulysses S. Grant to become commander of all Union forces in March 1864. Grant had proven himself a fighter at Shiloh and a strategist at Vicksburg. Lincoln had been plagued with generals who were reluctant to fight, including McClellan who Lincoln felt should have pursued Lee after his defeat at Gettysburg. A year after his firing, McClellan became the Democrat nominee for President in 1864.

Truman fired General of the Army Douglas MacArthur on April 9, 1951. MacArthur was a brilliant general but an egotist of the first magnitude. He was fired for insubordination, for making statements that contradicted the Administration’s policies of keeping the war in Korea limited. MacArthur immediately retired, returning to the United States after fifteen years abroad. Nine days after being fired, he spoke before a joint session of Congress, giving his famous “Farewell Address” in which he intoned how “old soldiers just fade away.”

In January 2007, President Bush, while taking responsibility for a failed Iraq strategy, replaced Generals George W. Casey and John Abizaid with General David Petraeus, who then led the successful Surge. General Petraeus’ success and popularity made him a potential GOP candidate in 2016. He was made Director of the CIA and was soon marginalized with stories of infidelity; so has disappeared from public view. Sometimes old soldiers get an assist in fading away.

But Mr. Obama appears to have taken the firing of senior military officers to a new level and for reasons that seem to have nothing to do with military expertise. In just the past year, at least ten senior officers – eight generals and two admirals – have been fired. The President has a perfect right to fire general officers who have incurred disfavor. Nevertheless, our country relies on a functioning military. Peace and security are necessary for the orderly process of law. Individual freedom depends on the rule of law. However, the military is considered one of the last bastions of conservativism. Under Mr. Obama, it has become a testing ground for social behavior – the permitting of women in combat and the elimination of the “don’t ask, don’t tell policy.”

No one can tell for sure if any of the firings were politically motivated, but some of the firings seem suggestive. Three of the firings were related to Benghazi. Four Star General Carter F. Ham who commanded the United States African Command during the Benghazi murders was relieved of command in April and retired. He had publically stated that within hours it was obvious that the attack on the compound was not caused by a “video.” Rear Admiral Charles M. Gaouette, in charge of Air Craft Carriers in the Mediterranean Sea the night of the Benghazi assault was also fired. Under testimony, he told Congress he could have launched aircraft to the destination (Benghazi). The Admiral was accused of using profanity in a public setting and making racially insensitive comments. He was later cleared of any criminal violations under the Uniform Code of Military Justice, but his career was over. Army Major General Ralph Baker who commanded the Joint Task Force-Horn at Camp Lamar in Djibouti, Africa was fired after being accused of groping a civilian; however, no sexual misconduct charges were filed. General Baker had claimed that attack helicopters could have reached the consulate the night of the attack.

Marine Corps General James “Mad Dog” Mattis, the former head of Central Command, was fired last January without so much of a heads-up from the White House or the Pentagon. Central Command covers the Middle East, North Africa and Central Asia. General Mattis, a highly decorated Marine, was blunt and direct, in a manner antithetical to the Obama Administration. One of his aphorisms: “Be polite; be professional, but have a plan to kill everyone you meet” was considered politically incorrect and did not sit well with Mr. Obama’s White House. While every executive needs to have those who work for him or her be candid, the line between frankness and insubordination is fuzzy.

In the case of all of these men, some charge had been laid and the individual found wanting. The charges include such alleged indiscretions as “profanity,” “groping a civilian,”, “using counterfeit gambling chips,” “loss of trust,” “adultery” and “improper relationships.” It is reminiscent of Warren Buffett’s recent response to a question about Jamie Dimon of JP Morgan: “If a cop follows you for 500 miles, you are going to get a ticket.” If it is politically desirable to fire someone, an excuse can be found.

Mr. Obama’s vendetta against the military [if that is what it is] did not begin this year. In five years, there have been five U.S. commanders of the International Security Assistance Force (ISAF) in Afghanistan – three Four Star Generals have been fired and one was removed to head up the CIA, and subsequently forced to resign in disgrace: General David D. McKiernan in June 2009; General Stanley A. McChrystal in 2010; General David H. Petraeus was removed in 2011; and General John R. Allen, Jr. in 2012. The current commander, named in February of this year, is General Joseph F. Dunford, Jr.

It may be that Mr. Obama simply inherited a bunch of dead-beat military leaders and had no choice other than to clear ranks. But somehow that argument seems empty when one looks back on how other Presidents handled volatile but talented leaders. “Dead beat” just does not describe this group. President Franklin Roosevelt recognized the talents of such firebrands as General George S. Patton and Admiral Ernest J. King, and he used them – manipulated them, if you will – to his and the nation’s advantage. He didn’t fire them. President Roosevelt considered General Douglas MacArthur one of the most dangerous men in America, yet he recognized his brilliance in the campaign against the Japanese in the Pacific during World War II.

It could also be, having chosen to leave the Iraqis and Afghanistanis on their own, Mr. Obama feels we have a surplus of generals, which is unnecessary and expensive. But somehow I doubt that as well. Regardless of his reasons – and as Commander in Chief he needs none – he has left himself open to speculation that politics may have played a hand. While the President does have power over the military and the executive branch, our system is one of self-government – that everyone in Washington serves at the pleasure of the people, that we operate under the rule of law and that the principle of liberty is our standard.

Interestingly, Mr. Obama’s actions have received very little scrutiny from the press. This is too significant to be ignored. On October 11th, Diane Sawyer, with Martha Raddatz, did a two and a half minute piece, prompted by the firing of Air Force General Michael Carey, which came less than 48 hours after the firing of Navy Vice Admiral Tim Giardina. (While Ms. Sawyer mentioned that there had been nine general officers fired this year, I count at least ten.) Giardina was fired for allegedly using “counterfeit gambling chips;” while Carey was fired for a “loss of trust” and “personal misbehavior.” General Carey had been in charge of America’s Intercontinental Ballistic Missile (ICBM) defense. Admiral Giardina was commander of Submarine Group Trident, with all 18 nuclear submarines with nuclear trident missiles under his command. Ms. Sawyer’s report was more of a whitewash than investigative journalism. She ended the report: “The bad news is that this is happening [behavior unbecoming to an officer]. The good new is that the services are taking action.” But, who are their replacements? Will they feel