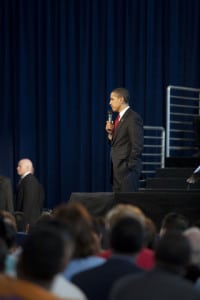 The best antidote for economic doldrums is more rapid growth. President Obama was handed a unique opportunity, in terms of an explosion in the production of oil and gas that was just getting underway when he was inaugurated in January 2009. Unfortunately, he let ideology dictate his response. Nevertheless, in spite of Mr. Obama’s reluctance toward fossil fuels and his preference for renewables, the U.S. oil and gas industries are experiencing a boom. Last year, the U.S. surpassed Russia as the world’s leading energy producer and in two years, according to the International Energy Agency (IEA), it will overtake Saudi Arabia as the world’s top oil producer.

In October 1970, oil production in the U.S. peaked at 10.01 million barrels per day (BPD). Production declined for the next thirty-eight years, reaching its nadir in September 2008 at 3.98 million BPD, less than two months before Mr. Obama won election. By 2013 oil production had risen to 7.45 million BPD. The United States Energy Information Administration (USEIA) expects production to be 8.39 million BPD in 2014 and 9.16 million BPD in 2015. Yet, despite that tail wind, the U.S. economy has compounded at a measly 1.8% under Mr. Obama’s leadership. In contrast, the thirty-eight years during which oil production was declining, U.S. GDP was compounding at 3.2%. This surge in U.S. oil and gas production is taking place, despite an Administration that has successfully prevented hydraulic fracking on federal lands and which has banned most drilling in coastal waters.

While U.S. crude shale production is expected to be short-lived – in five or six years, the IEA expects U.S. production of shale oil to begin declining – the same would not be true for oil in coastal waters, or for natural gas. U.S. natural gas production peaked in 1973 and declined into the 1990s, whence it leveled off for about ten years. In 2011, it surpassed 1973, and production today is now 15% above where it was forty years ago. More important, the “technically recoverable” reserves of natural gas in the U.S. suggest a hundred-year life, based on 2013 production levels.

Two technologies are responsible for this revolution in the extraction of oil and gas locked in shale formations: horizontal drilling, which allows access to bands of shale buried deep underground, and hydraulic fracking, which injects high-pressure fluid to release oil and gas from rock formations.

While oil is a global commodity and is priced in world markets, natural gas, which must be liquefied in order to be shipped, is priced locally. Thus, the United States has a competitive price advantage. In the March-April edition of Foreign Affairs, authors Robert Blackwill and Meghan O’Sullivan note: “In 2012, for example, U.S. [natural] gas prices stood at $3 per million BTU, whereas Germans paid $11 and Japanese $13.” This advantage has helped revive U.S. domestic, energy-intensive manufacturing and the downstream-derived chemical industry.

While everyone would agree that both business and government should give thought to the future, the Obama administration has been remiss in not taking advantage of the spurt in fossil fuel technology. The McKinsey Global Institute estimates that by 2020, unconventional oil and gas production could boost the United States’ annual GDP by roughly $380-$690 billion and create up to 1.7 million jobs. Keep in mind that annual GDP in 2013 was $15.7 trillion and is expected to grow by about 2% this year, or roughly $320 billion. In other words, they are suggesting that GDP growth could be closer to 4% or higher – a far cry from the anemic growth that has come to characterize the Obama years. Another 2% per annum GDP growth over the past five years would have added over $1 trillion to the economy and would have created millions of jobs.

Despite never signing the Kyoto Treaties, the United States has met its climate goals – not because of windmills or solar farms, but because of natural gas, which emits 40% less carbon than coal. It is doing so, as the writers in Foreign Affairs point out, “…not thanks to bold decision making in Washington but because the economics of gas have proved so much more favorable than coal.” It is of course inconvenient to those that hold that government is wiser than the people to be told that dynamic free markets prove the latter to be more efficient than the former.

Beyond climate change and what the boom in shale is doing for manufacturing and for energy independence, the United States could use its new-found increases in energy to be a help in the geo-political arena. Europe depends on Russian gas for 38.7% of their needs, but the Baltic nations, Finland and Ukraine derive 100% of their gas consumption from Russia. Exports of liquefied natural gas should be an easy decision to our energy-challenged allies in Europe. Being less reliant on Middle East oil would boost our independence and confidence.

But the biggest beneficiary to increasing oil and gas production would be the American consumer. The subsequent economic growth would provide government the wherewithal to reduce deficits. Federal spending is rapidly becoming simply a redistribution of money. While very few want to go back to the days when government ignored the plights of the indigent, the sick and the elderly, we cannot afford to continue down the path we are on. In the 2015 budget, just released by the Obama administration, 70% of all spending will be in the form of direct payments to individuals. More than a third will go to pay health bills and about a third will go to pay Social Security. Mr. Obama has railed against the one percent and against widening income gaps, yet a substantial portion of federal spending is handed out to the wealthy through Social Security and Medicare payments. Investor’s Business Daily estimates that the richest one percent of Americans receives roughly $10 billion each year, while the amount going to poverty programs will amount to 21% in 2015 versus an average of 25.4% from 1980 to 2008.

Mr. Obama came to office as the financial crisis was peaking. Instead of focusing on economic growth, he addressed his ideological wants. By jumping on the energy boom in its early stages, he could have engineered faster economic growth that would have alleviated unemployment and, in fact, added to government coffers. Is it too late for him to change? I don’t know. I suspect that while he preaches “hope and change,” he is stuck with the ideology he brought to Washington. But, if he is interested in faster economic growth, a new energy policy is a good place to start. It is not that all research into alternative forms of fuel should be dropped, but that the emphasis should be on providing the economy cheaper sources of energy today and making the U.S, energy self-sufficient tomorrow. The results would be a stronger economy, higher employment and greater security domestically and abroad, for us and our allies. It should be a no-brainer.

The views expressed on AustrianCenter.com are not necessarily those of the Austrian Economics Center.
hayek_admin2014-03-12T13:30:41+01:00