“ObamaCare – A Single-Payer in Our Future?” 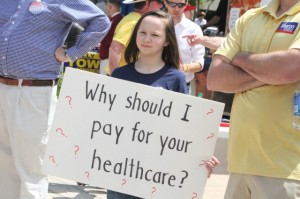 “I think the Russian problem is not just the president as a person. The problem is that our citizens, by a large majority, don’t understand that their fate; they have to be responsible for it themselves. They are happy to delegate it, say, to Vladimir Vladimirovich Putin, and then they will entrust it to somebody else.” So spoke Mikhail Khodorkovsky in Berlin, upon his release from prison in Russia.

While his syntax was a little confused, Mr. Khodorkovsky’s meaning was clear. He synthesizes the dangers posed when governments intrude too deeply into people’s lives. An increase in dependency translates into a loss of personal responsibility and individual liberty. Certainly in civilized societies government has a responsibility to help those who cannot look after themselves. That includes the ill, the handicapped, the impoverished and the elderly. However, when we include those who are able to care for themselves, but who find it easier to live on the largesse of a “caring” government, dependency can become addictive and regressive to human progress. Programs that start with benign intentions can morph into the despondency of dependency. Historically, self-reliance and the assumption of personal responsibility for our behavior have been integral to both individual success and the success of our nation. When we delegate responsibility to some other person or institution, we lose freedom.

These thoughts lead, obviously, to ObamaCare, its promises and its perils. The law was passed unilaterally. Members of Congress who supported it famously acknowledged they were unaware of its contents. “We have to pass the bill so that you can find out what’s in it,” infamously and arrogantly stated House Speaker at the time, Nancy Pelosi. Not surprisingly, implementation has been disastrous. Everyone knows that the prior system had substantial flaws, but the flaws of the ACA appear even more substantial. The question now is will the Administration continue to tinker around the edges, effectively changing the bill without Congressional agreement, as they have been doing? At some point, is it not likely that the Courts may rule on the legality of the Executive branch arbitrarily making such changes? Should a Republican majority control both Houses next November, will Congress attempt to repeal the law in 2015? If so, the President would surely veto any such attempt. Will the President, working with Congress, attempt to salvage what is good about the law and toss aside that which is not? As desirable as such efforts would be, it seems unlikely that this President and this Congress will work together to reconcile their differences. Both seem implacable.

I don’t pretend to have a crystal ball, but the consequences of the arrogant grab for power, which the passage of ObamaCare represented, will reverberate through our country for years to come. ObamaCare represents the most significant subordination of the individual to the collective in eighty years.

No matter the “bumps in the road” ObamaCare has encountered thus far, it is my guess that progressive Democrats will stubbornly hold onto the concept of a national health system. They are likely to argue that the problems we have encountered would be rendered moot if only we had a single-payer.

It seems likely that insurance companies will be demonized for rate gouging. As businesses owned by public shareholders or policy members, insurance companies will have to adjust premium rates to the arbitrary changes the Administration has been making. To argue, as some have, that the ACA combines the best of the public sector with the best of the private ignores the fact that insurance companies and providers are in this business (and predicament) because of federal fiat. The Administration may be forced to make good any lost revenues to the insurance companies, effectively having taxpayers bail them out – something, I am sure, that will be met with resistance. Many doctors and other providers are already opting out of the system. It seems probable to me that a single-payer system may have been the intent of Mr. Obama and HHS Secretary Kathleen Sibelius all along. Such sentiments appeal to many. Those who run “big government” and those who prefer the cocoon of “feel-good” government will find a single-payer as comforting as sipping hot chocolate while wearing red and black-checked pajamas on a cold winter’s night.

None of this is to suggest that government should not play a major role to play in our lives. Government is critical to our well-being. We are not anarchists. But as Americans, we have a self-interest in perpetuating the freedoms and individual rights that have allowed this nation to flourish and prosper. Nevertheless, civilization has made us communal. Community living is our natural state, whether it is in a small village, in a suburban housing complex or in a city apartment, we rely on one another. We depend on government to provide protection and security, to educate our children, to build roads and bridges, to care for those incapable of caring for themselves, and for myriad other services. But it is also important to recognize that every time we ask government to assume a new responsibility, we give up some element of individual freedom. It is also important to understand that politicians are not impartial observers. Their success is largely measured by an expansion of their duties. Ceding power, regardless of political affiliation, is not their natural state. The endless debate that engages people like me is not the necessity for government, it is the degree to which it regulates our lives. All politics can be seen as a continuum, with despotism at one end and anarchy at the other. The question is always: what is optimum – where on that continuum is the spot that provides the most good for the most people without destroying individual initiative that allow societies to prosper and economies to expand?

Certainly, I prefer a spot that emphasizes personal responsibility over dependency. By nature, I am one who believes that the wisdom of the individual – of the many, if you will, as expressed through their elected representatives – is far greater than the omniscience of the few, of an executive or appointee, no matter how benevolent or well-intentioned he or she may be, or what promises have been made.

It is true that there was much wrong with the existing healthcare system, and one benefit of ObamaCare is that it brought the subject front and center. While the majority does not like what they see in the ACA, there are very few people who want to go back to the way we were. The debate should continue and myriad options have been offered.

A lack of competition and a want of individual involvement played important roles in the high cost and inefficiency of the former system. Healthcare is an individual and family matter. No two families or individuals have the same needs. Employee-provided healthcare was established in the days following World War II as a benefit for enticing employees at a time when wage controls prevented more direct competition. However, employee-provided insurance assumes a “one-size-fits-all.” The system would be more efficient if employers provided equivalent funds to their employees, allowing them to purchase the insurance that met their individual needs. Health savings accounts (HSAs) would allow consumers to set aside pretax dollars to cover any deductible costs. One positive consequence of HSAs would be that providers would be forced to compete for patients on a basis of price and outcomes. Policies owned by the individuals, would be portable, solving the problem of pre-existing conditions. Catastrophic insurance should be of first order. Many consumers can afford routine physicals and most generic drugs. The system would be improved if insurance companies were allowed to compete across state lines. Additionally, any reform would have to reduce frivolous lawsuits, as fear of being sued has too often been responsible for doctors and hospitals prescribing needless and endless procedures and medicines, protecting their butts rather than doing what is right for the patient. ObamaCare has not addressed any of those concerns, and a single-payer system would only magnify them.

In the current issue of Foreign Affairs , Lane Kenworthy, professor of Sociology and Political Science at the University of Arizona, wrote: “…the ACA represents another step on a long, slow, but steady journey away from the classical liberal capitalist state toward a peculiarly American version of social democracy.” He asserts: “But the opponents are fighting a losing battle and can only slow down and distort the final outcome rather than stop it.” He notes that the Nordic countries have adopted market-friendly approaches to regulation. He writes: “The Nordic countries’ experience demonstrates that a government can successfully combine economic flexibility with economic security and foster social justice without stymieing competition. Modern social democracy offers the best of both worlds.”