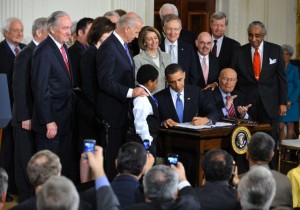 As the American people contemplate the future of their health care system with the implementation of ObamaCare, it is, perhaps, useful to look backward and briefly recall the origin and early history of government-managed national health care in the country where it all began: Imperial Germany in the late 19th century.

In the 1870s, the Social Democratic Party had been increasing its share of the vote among the German electorate and winning a growing number of seats in the Reichstag, the German Parliament. The triumph of Germany’s socialist party seemed very likely in the near future. The German monarch, Kaiser Wilhelm, and the conservative parties sensed that something needed to be done to deflect voter support away from the socialists and their radical vision for nationalization and a centrally planned economy.

Bribing the Workers with the Welfare State

The “Iron Chancellor,” Otto von Bismarck, persuaded the Kaiser to sponsor welfare-statist legislation, including a program for national health care. Bismarck believed that the working class would shift its support from the radical program of the socialist movement to a renewed allegiance for the monarchy and the political status quo.

Years later Bismarck explained his reasoning to William Dawson, an American admirer who quoted the Chancellor in his book, “Bismarck and State Socialism” (1890): “My idea was to bribe the working classes, or shall I say, to win them over, to regard the state as a social institution existing for their sake and interested in their welfare.”

But the philosophy behind national health insurance and other government welfare programs was not merely cynical political manipulation. German political scientists and economists, who were known as members of the German Historical School, argued that what was being implemented was a new era of political paternalism that would free people from the uncertainties of everyday life.

For the German Historical School, “state socialism,” as they called it, offered the middle ground between a radical individualism that desired the state to do nothing and a radical Marxian socialism that desired the state to do everything. The guiding principles, they said, about what the government should regulate and control were to be “pragmatism,” “expediency,” and “opportunism.”

Frederic C. Howe (an American intellectual who played a leading role in the Progressive movement and later served in Franklin Roosevelt’s New Deal) explained this new German thinking about social welfare in his book “Socialized Germany” (1915):

“The [German] state has its finger on the pulse of the worker from the cradle to the grave. His education, his health, and his working efficiency are matters of constant concern . . . First in the list of such [distributive] activities are the social insurance schemes which distribute to the community the burdens of sickness, old age, accident, and invalidity.”

Dawson also summarized the political philosophy behind the expansion of the role of government in society:

“In the mind of the Germans the functions of the state are not susceptible of abstract, a priori deductions. Each proposal must be decided by the time and the conditions. If it seems advisable for the state to own an industry it should proceed to own it; if it is wise to curb any class or interest it should be curbed. Expediency or opportunism is the rule of statesmanship, not abstraction as to the philosophic nature of the state . . . There is almost no dissent to the assumption of state supremacy, of subordination of the individual, of the necessity for personal and class sacrifice to the Fatherland . . . The individual exists for the state, not the state for the individual.”

Howe insisted, “This paternalism does not necessarily mean less freedom to the individual than that which prevails in America or England. It is rather a different kind of freedom,” under which the government relieved people of having to personally plan much of their own lives and those of their families.

State-mandated health insurance began in Germany in January 1884 and initially covered workers in factories, mines, foundries, banks, dockyards, railroads and inland shipping. The blanket of coverage was extended over increasing portions of the work force in 1885 and 1892, with family members of workers included after 1892. In 1911, workers in agricultural and forestry occupations were added, and by 1928, practically every trade, occupation, and craft in Germany was enveloped in the system.

Before the First World War, anyone making less than 2,000 marks in the covered occupations was required by law to participate in the insurance scheme. By 1928, all those earning less than 3,600 marks were forced to participate. The insurance funds mandated by the German state were organized on the basis of trades and occupations. But the state continually consolidated them, with the result that, while in 1909 there were 23,000 of such funds, by 1914 they had been reduced to 10,000, and to about 7,400 in 1929.

Representatives of employers and labor unions managed the insurance funds in each industry. The government required that at least a sum equal to 1.5 percent of the average wage in an occupation be contributed to the fund by each firm, with the contribution split on the basis of two-thirds being paid by the employee and one-third by the employer. And as a result, worker representatives made up two thirds of the members on the board of each fund.

Besides these basic benefits, the compulsory-insurance funds often provided cash benefits equal to 75 percent of the worker’s pay (depending upon family size), and by the 1920s, these cash payments often started only one day after an illness began. Financial coverage was also extended to include nursing services and convalescent treatment for up to a year after the end of cash benefits. Maternity benefits were mandatory as well.

The Results of German Health Insurance

The benefits paid out by the state-mandated health insurance system continuously exceeded contributions received from member employees and employers and required government subsidization. Total contributions received by the health-insurance funds from employers and employees in 1929 were 375 percent larger than they had been in 1913. But health-insurance benefits paid out by the funds in 1929 were 406 percent larger than what was paid out in 1913. Costs of administering the mandatory insurance funds had increased 288 percent between 1913 and 1929. And the government subsidy to the system had increased by 270 percent between 1924 and 1929.

The extension of socialized health insurance also saw an increase in what the German literature called “malingering.” Walter Sulzbach explained this p