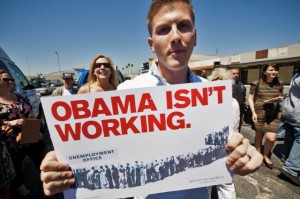 For those who believe the word Obamaconomy has been contrived, it has not. It is defined by the Urban Dictionary:  (n.) 1. the structure or conditions of economic life in the U.S., as managed under President Barack Obama. However, its true definition is more specific…and more depressing. The economy has experienced sub-par growth ever since the recession was officially declared over in June of 2009. In the 15 quarters since the recession ended, GDP growth has averaged about 2.3%, about half the rate exiting from prior recessions. Ironically, it has been severest on those who were Mr. Obama’s most enthusiastic supporters.

Mr. Obama set out to help the poor and underprivileged, but his policies have in fact benefitted the wealthy, principally because artificially low interest rates have boosted asset prices, including stocks.  On Wednesday, the New York Times quoted a study prepared by economists Emmanuel Saez and Thomas Piketty that the top 1% took home more than one-fifth of the income earned by Americans in 2012, “one of the highest levels on record since 1913, when the government instituted an income tax.” While tax increases in 2013 caused some investors to accelerate their income into 2012, the numbers are still surprising. The failure of the President’s economy is centered on a misconception that a policy of redistribution will help the poor, the middle class and the economy as a whole. It doesn’t.

Does this suggest that the President is a closet capitalist? I suspect not. More likely it simply argues that he does not understand the link between private investment and job growth, and that a simpler tax system and less cumbersome regulation stimulate confidence. Improved confidence drives job growth and investment, which reduces unemployment and improves family incomes. It is not rocket science. And it doesn’t take more government. It takes less.

Unemployment peaked in October 2009 at 10%; it has since declined to 7.3%. However, labor participation declined from 66% in December 2007, at the peak of the previous business cycle, to 65% when the recession ended, to 63.2% in August of this year. The jobless rate did fall from 7.4% in July to 7.3% in August, but the principal reason for the drop was the decline of 312,000 people in the labor force. Lawrence Lindsay, president of the Lindsay Group, has estimated that if the labor force participation rate were the same as it had been before the recession began, unemployment would be 11.2%.

Mr. Obama inherited a financial crisis of unprecedented magnitude. In the fall of 2008, it appeared that capitalism might fail. There were those at the time who invoked the spectre of Karl Marx. He (Mr. Marx) had claimed that the collapse of capitalism was inevitable, because it had within itself the flaws that would cause it to self-destruct. (Mr. Marx was thinking of the inherent conflict between the business owning bourgeoisie and the worker proletariat – that ultimately the ranks of the proletariat would swell to a level that would dwarf the bourgeoisie. Mr. Marx, however, underestimated two human traits: First, business owners have a self interest in keeping workers happy and, second, collective bargaining allowed workers to achieve fair compensation and improved working conditions, including non-nonunionized businesses.

In any event, the system in 2008 held. For that we owe thanks to the chief architects of the defensive measures taken that fall by the Bush Administration: especially Treasury Secretary Hank Paulson, Fed Chairman Ben Bernanke and NY Fed President Timothy Geithner. While the recession still had six months to run and the stock market would not hit bottom for another six weeks, by the end of December, less than four months after the bankruptcy of Lehman Brothers, the High-Yield market was on the rebound and the TED spread (the difference between Three-Month LIBOR and Three-Month US Treasury Bills) was narrowing. The yield on the Bloomberg High Yield Index had declined from 25% at the end of November to 17.4% at the end of December. The TED spread had narrowed from 485 basis points at the end of September to 166 basis points on December 31 – still high, but indicating that credit markets were righting themselves. Monday morning quarterbacking has suggested that all did not work perfectly. It did not, but the system did not collapse and that is what was critical.

Instead of encouraging the natural restorative powers of capitalism and markets, Mr. Obama, once sworn in, chose to involve the State in a bigger way. This was when Rahm Emanuel made his infamous remark that a crisis should never be wasted. Mr. Obama bailed out General Motors, but in doing so he placed the demands of creditors behind those of union members, something that would not have been allowed in a court of law. With Democrat majorities in both the Senate and House, a stimulus package was passed unilaterally, with no Republican votes. Letting Messers Dodd and Frank design the Wall Street Reform and Consumer Protection Act was akin to letting the fox design security for the henhouse. There was no question that a significant portion of blame for the crisis could be laid at the feet of Wall Street traders and bankers. They had used depositors’ money and debt to make bets that would provide outsize returns to themselves, while letting creditors (including depositors) assume the losses. (It got even better for bankers when taxpayers were asked to pick up the losses.) But Mr. Obama failed to fully appreciate the cronyism that exists between Wall Street and politicians.

Washington went into overdrive, creating regulations that will take dozens of lawyers dozens of years to comprehend. Dodd-Frank has over 400 provisions; it is too complex to be understood by any but the very largest companies with their legions of lawyers. This morning JP Morgan Chase announced they were hiring 5000 people to ensure they are incompliance. Those costs will be borne by depositors, lenders and shareholders. Assets of the ten largest banks have increased 40% to $11 trillion in the past five years. If the banks were too big to fail five years ago, they are far too big to fail today. Besides which, the Volcker Rule – the one aspect of Dodd-Frank that might prevent taxpayers from having to bail out the banks in the future – may never be implemented.

Over the years lobbyists have become increasingly powerful, and their power has only grown under the Obama Administration. They represent myriad organizations, from labor unions to industry groups to large corporations. They do not represent the people. Lobbying per se is perfectly legitimate. It is a means by which an organization can make their wants known. Unfortunately, however, their influence has become pervasive, adding to the complexity of the tax code and regulations. The unintended consequence has been an entanglement that has not only added unnecessary costs to businesses, but has reduced the confidence necessary for them to expand and hire, and to allow the economy to grow more quickly.

In his review of Lawrence Lindsay’s The Growth Experiment Revisited, in Tuesday’s Wall Street Journal, Stephen Moore pointed out that in the twenty-five years following the Reagan tax cuts $40 trillion was added to American’s net worth, and that 40 million American were added to business payrolls. The mistakes made by both Presidents Hoover and Roosevelt in the early 1930s – raising taxes and increasing tariffs – were not made by either Reagan in 1982 or George W. Bush in 2001. In both cases, in 1982 when unemployment reached 10% and held that level for the longest period in the post-War period and in 2001, amidst the bursting of a stock market bubble and an attack by terrorists, the Country was able to ward off what could have been far worse recessions. In contrast, Mr. Obama chose the Hoover/Roosevelt model – not raising tariffs, but increasing taxes and tightening regulation.

No system, either political or economic, is perfect. However, over time democratic capitalism has served the people well. Despite claims by some on the Left, no sensible person on the Right believes in an absence of regulation or taxes. The debate is about what level of each allows for maximum growth in the economy, while providing safety and protection to the people. Unfettered capitalism leads to anarchy and ultimately collapse. Taxes that are too high and regulation that is too extreme cuts off the life-blood of economic growth, eventually leading to collapse.

But a system that has helped the rich at the expense of the poor and middleclass is, in the end not good for either. An economy that has almost 20% of the population on food stamps – 48 million people – is one that creates dependency, not responsibility. What is needed is a simplified tax code, easily understood and regulation that is equally simple and, importantly, enforceable. In Connecticut, my electrician tells me that he has to file with seven regulatory bodies, some of which are over-lapping. It takes time and money…and costs jobs. Mr. Obama’s attempts at redistribution have failed, hurting job prospects for those he had hoped to help. It would be untrue to say that Obamanomics has been a total failure. The economy is chugging along, but at a pace well below its capability. The results have not matched the promise. The Obamaconomy has made all of us worse off.

The views expressed on AustrianCenter.com are not necessarily those of the Austrian Economics Center.
hayek_admin2019-01-14T06:43:46+01:00