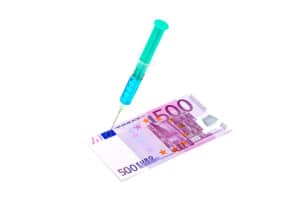 We are approaching the time when the ECB will pull the trigger and will start buying paper “assets” (i.e. someone else’s liabilities) in the ultimate hope of stimulating a paralytic EU economy that is devastated by regulations, high taxes, unsustainable debt and unfunded liabilities. The zero-bound interest rate trap is about one thing: depressing the expected rates of returns to real investments and thus setting up the economy for an era of diminished expectations. This is the epoch where the self-inflicted wounds are coming not from what we hate (putting our economic and financial houses in order), but rather from what we love (easy money).

The expected “asset” purchases by the ECB cannot heal the EU’s problems for several reasons. Here are a few basic ones:

The very unfortunate thing is that by its decision the ECB trivializes the reality of an EU-wide crisis that has been caused by flawed judgment, inadequate leadership, bad decisions, ahistorical policies, incompetent practices, and vested interests. As the ECB embarks on its voyage and as Japan sits in the middle of its ocean of QEs, Asian currencies will feel the developed economies appetite for cheapening their currencies and as they may be embarking on their own voyage, China with its own bubbles and non- performing loans may be tempted to devalue at a time when the US will be raising rates. That would be the time to wonder – as Neil Postman did in his book “Amusing Ourselves to Death” – if Huxley (and his “Brave New World”) was right rather than Orwell (in his 1984 book). Let’s recall that contrast.

The times they are a changing and rather than lighting up candles that shine light and make things clear, we extinguish the elements (such as the cathartic possibility of failures) that can truly liberate us from our fears and boneheaded policies and mentalities.

The views expressed on AustrianCenter.com are not necessarily those of the Austrian Economics Center.
hayek_admin2019-01-14T06:14:03+01:00