Operation Market Garden: Can it Happen Again? (This time in the financial world)

Following the successful Normandy invasion in June 1944, the Allies executed that September the military operation known as Market Garden (Market referred to the airborne forces that were supposed to seize bridges, and Garden to ground forces). The purpose was to invade Germany through the Netherlands and end WWII by Christmas that year. Unfortunately, and despite General Montgomery’s proclamation that “the operation was 90% successful,” the operation failed due to poor planning, strategy execution, and logistical problems, with close to 20,000 dead soldiers among the allied forces.

What is the resemblance to today’s market situation? After the financial crisis of 2008-2009, things seem to be stabilizing (on the surface, as we repeatedly have stated) and the great majority of the fundamentals are improving without addressing the causes of the crisis. Following the Normandy invasion, things were looking very good for the Allied forces. The fiasco of operation Market Garden set back the Allies, and the critical path for the defeat of the Nazis. In a similar manner, the policies unfolded since 2009 designed to kick the can down the road have been successful to a large degree. However, and despite the fact that the signs were everywhere regarding China specifically and emerging countries’ situation in general, the markets were caught off guard and have experienced the worst ever start of a New Year.

Given Mr. Market’s mood swings and the possibility of mispricing that we have been witnessing over the course of the last several weeks, we are of the opinion that the observed dislocation has the potential of derailing good surface fundamentals despite the possibility of a rally in the next few days/weeks. The main strategic/execution mistake of the Market Garden operation was that the paratroopers fell way too far from the targeted bridges (close to 12 miles!), and hence the seizure of the bridges was an unrealistic goal.

The markets may have fallen too much (recall the August 1987 market events) and the dislocation that has occurred along with the unaddressed causes of the financial crisis may lead to the following series of events:

If the market follows a path that resembles the one described above, we anticipate greater market outflows (including those of sovereign wealth funds) which will add to a volatile market and an exacerbation of fears.

As the figure below shows, market outflows correlate very well with the performance of the S&P 500. 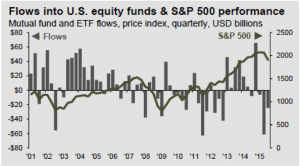 We live in unique times from a geoeconomic and geopolitical perspective. The figure below shows that we have never experienced before an era where M2 money supply represents close to two thirds of the GDP while the derivatives structure remains an issue that is not addressed.

As a concluding note we would reiterate that if what was described above resembles even partially what may be forthcoming, then hedging should be an important element in portfolios to be followed by anchoring the portfolios in hard assets with intrinsic values.

The views expressed on AustrianCenter.com are not necessarily those of the Austrian Economics Center.
Federico Fernández2019-01-14T05:57:47+01:00