Barbara Kolm is President of the Friedrich A. v. Hayek Institute in Vienna, Austria, Founding Director of the Austrian Economics Center, and Vice President of the Österreichische Nationalbank (Austrian Central Bank). A worldwide networker, Kolm is renowned for promoting free market policies. She is a frequent speaker on public policy related issues, especially on deregulation and competition, the future of Europe and Austrian Economics. Barbara Kolm is an Associate Professor of Austrian Economics at the University of Donja Gorica, Montenegro and serves on several advisory boards. She is a Member of the Mont Pèlerin Society. If you are interested in having Dr. Kolm speak at your event, please visit her speaker-website: https://barbara-kolm.at/.

Michael Jäger has been Secretary General of the European Taxpayers’ movement Taxpayers Association of Europe (TAE) since 1996, and since 2011 the Chief Executive Officer (CEO) of the European Economic Senate, a network of leading corporations in Europe. Michael Jäger has worked for the Bavarian Taxpayers Association since 1991 and served as Vice President since October 2015. He was elected Vice President of the German Taxpayers Association in 2018. He is an entrepreneur, consultant and author, working as a watchdog on behalf of taxpayers, fighting for less taxation, more individual freedom and a free market economy. He has published and given statements and lectures on matters pertaining to taxation, public spending, agricultural and structural reforms, funds, deregulation, privatization and institutional reforms. In 2016 he received the “Mérite Européen” Award for his commitment to Europe and the people of Europe. 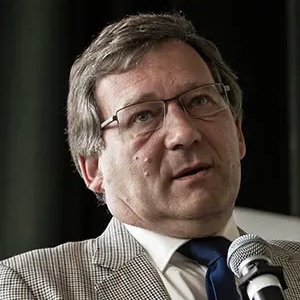 Richard Zundritsch is a business consultant with a focus on capital markets and small business M&A. He previously worked as a director of corporate finance for numerous international banks in Austria and Germany, and across Eastern Europe and Latin America. Dr. Zundritsch is fluent in English, German, Dutch and French.

Stefan Zapotocky studied Technical Mathematics at the TU Vienna. He worked as a strategic planner at Erste Bank, built up the Capital Markets division at Länderbank and headed the Asset Management division at Bank Austria, before serving as CEO of Wiener Börse AG for six years. Today Dr. Zapotocky serves on the board of the private foundation RPR Group and has responsibilities on numerous supervisory boards.

Nigel Lawson, Baron Lawson of Blaby, is a journalist, a member of Britain’s Conservative Party and now sits in the British House of Lords. From 1981 to 1989, he held various cabinet positions in the government of Margaret Thatcher. Before entering politics, he worked as an editor at The Sunday Telegraph and The Spectator magazine. He was educated at Christ Church, Oxford where he studied Philosophy, Politics and Economics.

The recipient of the 2006 Nobel Memorial Prize in Economic Sciences, Edmund Phelps is professor of economics at Columbia University, New York. He is a fellow of the New York Academy of Sciences and has served as a consultant to the European Bank for Reconstruction and Development. Dr. Phelps received his Bachelor’s degree from Amherst College and holds a Ph.D. in economics from Yale University.

Vernon L. Smith is professor of economics and law at George Mason University and is a research scholar in the Interdisciplinary Center for Economic Science in Arlington, Virginia. He is a member of the National Academy of Sciences and is President of the International Foundation for Research in Experimental Economics, which he co-founded in 1997. Dr. Smith received his Bachelor’s degree in electrical engineering from the California Institute of Technology, as well as a Master’s degree in economics from the University of Kansas and holds a Ph.D. in economics from Harvard University. In 2002 he was awarded the Nobel Prize in Economics.