About a year ago in a meeting we had in Warsaw, Poland I contrasted Jamaica and Singapore. The contrast was based on a simple observation/fact, which stated that those two countries started at almost identical positions in the early 1960s, but Singapore excelled since it adopted reforms while Jamaica is still struggling. A good friend was skeptical about my claim but after doing his homework he posted the following graph: 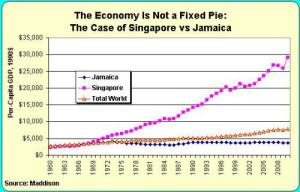 As explained below, in a Grexit scenario the EU will lose much more than Greece, to the point that the ECB will need to be recapitalized (a politically disastrous outcome for the Brussels-based Eurocrats). My argument in this commentary is equally simple: Greece can forget the Eurocrats and their over-regulatory mania in Brussels (after all their predictions failed miserably demonstrating that they know the price of everything but the value of nothing ) and commit itself to becoming the Singapore of Europe. For its immediate liquidity needs, I would refer the reader to my posting on February 5th (see link below) where through reverse repos the liquidity needs can be fully met.

If Greece commits to the reforms that Singapore underwent – and there is nothing that prevents her from doing that – then, either within or without the Euro, it will become the destination of hundreds of billions of capital funds that will advance growth, jobs, incomes, let alone enable the country to recover its sovereignty, (and if it chooses to abandon that dysfunctional Euro currency, then it will allow herself to issue one of the strongest currencies in the world, becoming the envy of the Eurozone).

Geopolitically Greece – under the current circumstances – is very crucial to the West, which cannot allow her and the Balkans to become the soft underbelly of Europe, as Ivan Kreastev accurately wrote (http://www.ft.com/intl/cms/s/0/2287ba66-8489-11e4-bae9-00144feabdc0.html?siteedition=intl#axzz3OzUdt2JU) in the Financial Times on January 15th. If Putin (who in his financial tremors may end up borrowing from China to lend to Greece in order to achieve his objectives) is allowed to use the Balkans for his purposes, then we are in for a colder war, where liberty and democracy in several countries will be jeopardized.

Already, the Greek banking system is suffering significant capital flight of about $2.2 billion per week for the last several weeks. However, capital controls is not the answer. Rather, a decisive move where a signal is sent to the Eurocrats that a Grexit jeopardizes their loans of €315 billion, as well as the Target2 program (of hundreds of billions of Euros) of the Eurosystem, is the proper response. The Eurocrats have more to lose than the Greeks, and under rational thinking they are the ones who should blink first (however, I have some reservations if rationality is the name of the game at this stage).

Here is the full picture of who owns the Greek debt: 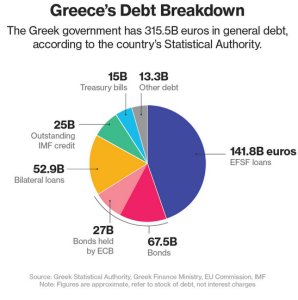 The losses of over €260 billion held by foreign entities (such as the EFSF, the ECB, and bilateral loans to EU countries, etc.) come with a significant price to the EU member states as the following graph shows. 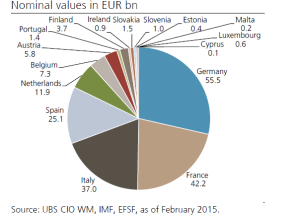 Moreover, the losses to the ECB could be such that it could destabilize its balance sheet. Specifically, the ECB, which will have to face a tsunami of dominoes in the Target2 program, as other member countries will automatically be reverting to that mechanism. The Grexit could possibly mean that the EU and the ECB become financial unstable. As the following figure demonstrates the liabilities of the Target2 program are close to €1.5 Trillion (with a big T). The notion that a shakeup of those liabilities does not imply a financial earthquake for the whole of the EU is a delusion.

The fact that the Eurocarts rejected the proposal that the French Minister of Finance put on the table and to which the Greek government would have agreed to is indicative of the irrational thinking that prevails. (That proposal was calling for a moratorium of austerity measures for four months and the implementation of an intermediate program that will provide relief, while Athens will be preparing its counter-proposal for an adjustment program that will be focusing on growth).

The Eurocrats obsession with bailouts of banks and states, and with their rotten recipe of larger governments that prevent growth from taking place (curiously I wonder how many of them have met payrolls or run companies), may be performing a great service, that is to discover the route to honest public finance.

Greek debt of $370 billion is unsustainable. If Greece follows the disastrous recipe of the Eurocrats, then it will condemn its future generation(s) and will experience a dramatic brain drain. The Eurocrats are promising pain now for gain in about twenty five years (see debt payoff schedule below). However, when those future gains are discounted, they amount to almost nothing. Greece needs radical reforms of the Singaporean style now, in order to excel, attract capital, and generate jobs and incomes.

Here is the maturity profile of Greece’s unsustainable debt. 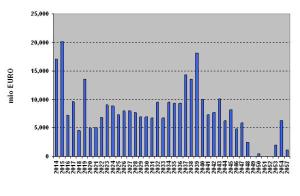 And here is the composition of the debt accumulated in 2014. 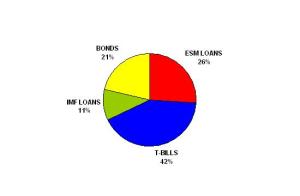 The fact that 42% of new debt is made up of TBs portrays the unsustainable nature of a pathetic strategy that anesthetizes the patient to the point that he never wakes up from such anesthesia.

How in the world will Greece be able to meet those redemptions in 2015 and in the following twenty five years? The Eurocrats decided to burden their constituents (Germans, French, Italians and the rest of the EU) with more debt for the sake of bailing out those with vested interests (not Greece), rather than allowing the market forces do what it does best, i.e. cleanse excesses and establish the base for a new start. The time may have come for such catharsis and honest price discovery in the bond market which cannot be the game play of bureaucrats.

A Singapore-style of reforms in Greece within a framework of debt restructuring, will accomplish three things: First, it will attract capital that will rejuvenate its industries; second, it will portray an image of stability with a debt load that not only will it be sustainable but also conducive to job creation; and thirdly, it will allow genuine growth based on productivity gains and not on fiat manipulations.

Ode to catharsis and to Singaporean-style of reforms!