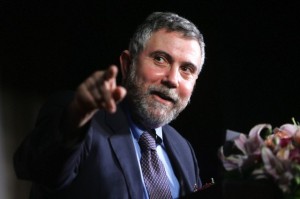 12 May 2009, Shanghai, China — Nobel Prize winning economist Paul Krugman gestures during his speech at a forum in Shanghai, China, May 12, 2009. — Image by © Imaginechina/Corbis

Few have written more about the European financial crisis since 2008 than the Nobel laureate, New York Times columnist, and Princeton economics professor Paul Krugman. After five years, it is clear that the eurozone has survived contrary to his predictions and the countries that pursued fiscal discipline, contrary to Krugman’s advice, have done better — both economically and politically — than those that did not.

The views expressed on AustrianCenter.com are not necessarily those of the Austrian Economics Center.
hayek_admin2019-01-14T06:41:47+01:00