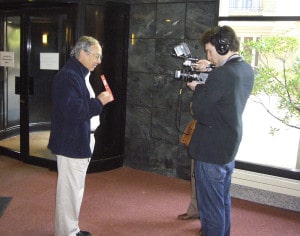 by Louis Rouanet and Christophe Seltzer

Sometimes Libertarians are criticized for living in the clouds, for being too theoretical and utopian. Jose Piñera is one of those who proves us that there is nothing more realistic than the libertarian solutions. Facing the absence of debate on the pension system, facing the inertia of opinions in favor of public pensions, the initiative of the publication, by Liberté Cherie, of a short text on this subject was much needed.

The “little red book” by Jose Piñera is truly revolutionary: It puts forward solutions which are either unknown or ignored in France. This text about the Chilean pension reform is concise but lucid and captivating by its clarity. It gives indisputable clues against the political class conservatism. We invite you to spend some time reading this booklet, about twenty pages, which you will find very instructive.

This little red book by José Piñera tells the story of a full pension reform of a degenerate regime, plagued by irresponsible politicians and ruined by the influence of vested interests. A public pension system fundamentally flawed, based on planned statistical assumptions which were shown to be completely unrealistic. The pension system implemented in Chile is flexible and responsible, socially just; it promotes prosperity for all, allows workers to control their life freely and to become homeowners.

Facing the success of the private pension system, it is time to ask ourselves about the validity of the French system and propose an alternative. But is not the private pension system a means to grow fat the bosses? Is it not chronically unstable? These objections are actually widely myths! To discover it, it is enough to read this new little red book. The facts speak for themselves. Since the reform of the pension system in Chile in 1980, the pensions of this new system raised by 300%. The increase of savings made investment easier. The workers became owners. This system solves problems linked to demography. It is stable and resists financial crises which are always temporary on the scale of a working life of forty years. After thirty-four years, none of the seven governments, including socialists, wanted to put an end to this system which works. Nobody lost money of their pension in Chile. More exactly, they increased their savings, contributing at the same time to finance new projects and jobs. The private pension system is solidarity, but in another way and in a free way.

We must to stop the irrational reactions at every mention of the word “private”. The private pension system is not the work of the capitalist devil, but it is a fair and efficient natural principle that comes from common sense. Every day, we capitalize all our knowledge, our meetings, our information in order to benefit from them in the future -regardless of having an altruistic purpose or not. Our own wealth makes other wealthier. To centralize the pension system like it is today, it is to confiscate our power to choose the best solution. It is as if they announced that the State would collect knowledge to distribute it arbitrarily, thus destroying the fruitful spontaneous interactions. The bureaucrats, because their fatal conceit, think that they are able to decide better than us! But why? They are not gods, they are just men! You can better manage your pension plan than an obscure civil servant in his office. To centralize knowledge, which is dispersed in the society, has never been efficient!

We have arrived at the point where the public pension system mined by deficits, waste and injustice becomes each day a more dangerous and risky system. As Jose Piñera asks: “Do you want to trust the social security contributions to a government program which is similar to a black hole, because we don’t know where the money goes or how it is used for, or do you prefer having this money in a booklet of savings or ‘booklet of pension’ which is your property and nobody will be able to seize them?”

Thanks to this little book, Jose Piñera, whom we have met, shows us a way: we, the libertarians, can revolutionize the intellectual software and the society, to make them more free for the interest of everyone. Yes, the public pension system is a fake solidary system, which uses funds in an immediate, dark and centralize way. Part of these funds do not even exist sometimes. Yes, the public pension system puts the future generations in debt and will confront generations. What we see today, it is a distributed pension system, what we don’t see are the losses linked to this system which we will have to pay tomorrow.

The pension system reform of Chile shows one thing: It is possible to go out of this system, which resembles a Ponzi scheme or a Bernard Madoff investment. The power of society is superior to the political speculation which makes us take risks, with the money of the others, without realizing that it is to the detriment of our future pensions. The decisions that each individual takes are both superior in terms of justice and effectiveness.

This book is a call for everyone, the hope for our generations: politicians stole our future, you can take it back!

Translated by Agostina Lorenzini
Originally published in French by Contrepoints

The views expressed on AustrianCenter.com are not necessarily those of the Austrian Economics Center.
hayek_admin2019-01-14T06:16:48+01:00