Pope Francis and the American Dream 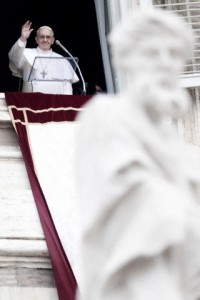 These days we hear a lot of praise for Pope Francis from folks we wouldn’t normally expect to hear it from – the Gay Advocate, Planned Parenthood, and the hosts of the MSNBC network. Their approval stems largely from statements made by the Pontiff that they construe as a softening on the Church’s position on certain “hot button” social issues.

But Pope Francis has been equally misunderstood on economic issues. While socialists of all stripes have embraced him as their own, they have ignored subtle and not-so-subtle statements he has made that speak to the dignity of work and the importance of upward mobility and the ability to rise out of poverty – something free market economies have the distinction of delivering better and more broadly than any other system of economics. Indeed, the Church and the Pope speak often of the Christian obligation of charity and kindness toward those who are less fortunate. There’s no disputing that nations with the most economic liberty and who champion the freedom and the corresponding responsibilities of the individual, such as the United States of America, have produced the most generous citizens known in the history of mankind. After all, Jesus didn’t ask the Roman government to feed the multitudes; through his miracle of the multiplication of the loaves and fishes, He taught us that the Church, and its people -who are the body of Christ- are individually responsible for the hungry and needy among us.

During his visit to Brazil this past summer, Pope Francis spoke to the crisis of chronic youth unemployment that is the hallmark of so many European nations that embrace socialist ideals, such as Spain. Today, Spanish youth unemployment is at a staggering 57.7%, the highest across the European Union. The Pope rightfully expresses concern for a generation who, as a result of lack of opportunity, may never learn how to work. I have personally seen this happen to members of my own extended family in Spain. Those who never gained basic work skills in their teens and 20s, remain virtually unemployable in their 30s and 40s and suffer from lack of initiative bred by years of dependency on government. Emotionally and psychologically, they don’t have the confidence and self-esteem that working and prospering young people possess.

The economic stagnation and dependency of European style socialism is a cautionary tale for those who think that government programs can substitute for the many nontangible benefits of work and earned success.

Which brings me back to Pope Francis’ comments in Brazil: “People get their dignity from work; from earning their bread”, he told reporters on his flight home to Rome.

This month The LIBRE Initiative (LIBRE) is launching Share the Dream and a series of short video-documentaries highlighting the American Dream of real-life Hispanic Americans who have transcended poverty and difficult circumstances through hard work and use of their God-given talents. LIBRE is a nonprofit organization that educates and empowers Hispanics to succeed so that they don’t fall into a life of dependency and diminished dreams.

Share the Dream is an uplifting campaign that reminds all Americans of the privilege of living in an “opportunity society” where one’s station in life is not static or determined by where you started, but rather by one’s self-initiative, perseverance, and willingness to work and sacrifice for the next generation. One of the videos highlighted is my own family’s American Dream story.

At a very important time, when people across the globe are debating the proper role of government and the best solutions for solving a worldwide economic downturn, Pope Francis has pointed to a very simple and powerful truth about the human spirit. Work and earned success are crucial to our human dignity. Individual prosperity also enables us to experience the joy that comes from sharing our blessings with the poor. Mother Theresa said it best when she cautioned against the temptation to turn to doctrines of class struggle. Instead, she said, what we need is a “class encounter, in which the rich save the poor and the poor save the rich.”

To live in America and have a shot at the American Dream is a indeed a privledge. At LIBRE, we celebrate those who work tirelessly to make their “dream” come true so they can share the “fruits” of their dream with their families and with those in need.

Rachel Campos-Duffy is an author, pundit, and mother of seven. She is a spokesperson for the LIBRE Initiative, an organization that promotes economic liberty, empowerment and opportunity for Hispanics.

The views expressed on AustrianCenter.com are not necessarily those of the Austrian Economics Center.
hayek_admin2019-01-14T06:39:39+01:00