The Population Advantage for Eastern Europe on the EU Budget

Discussions over the future of the EU Budget covering the period from 2021 to 2027 have been going on behind the scenes for some time, and on May 2, the European Commission formally proposed what it terms “a modern budget for a Union that protects, empowers and defends.” Leaving aside the inevitable hyperbole, it is widely anticipated that the negotiations regarding the budget are going to be difficult. Arguments over how to fill the hole left in the EU’s finances caused by the loss of the UK’s net-budgetary contribution, and resultant requirement to change the balance of Member States’ financial contributions and expenditure allocations will continue for quite some time.

While in parts of the EU much heat may be generated by the Commission’s proposal to introduce powers to suspend or restrict access to EU funding in response to “generalised deficiencies regarding the rule of law,” for the EU countries of Central and Eastern Europe (CEE), this budget cycle has potentially an even greater significance than would otherwise be the case.

Although recognising that treating the post-2004 EU joining CEE countries as one bloc is misleading, it can be useful to illustrate trends. With the withdrawal of the UK from the EU, the balance between the pre- and post-2004 EU joiners in terms of population has shifted. The new balance favours slightly more the post-2004 joiners, which broadly encompassing the countries of Eastern Europe (plus Cyprus and Malta). Based on population data from the UN Department of Economic and Social Affairs, the post-2004 CEE joiners (ex. Cyprus and Malta) make up approximately 20.2 percent of the EU’s population at an EU28 level. With Brexit, at EU27, this proportion increases to 23.2 percent. This may appear to be only a slight increase in weighting, but it is one that is very likely to represent a high point for the CEE countries.

The 2017 Revision of the World Population Prospects by the UN has laid stark the predicted demographic decline of CEE countries, with all countries in the region expected to have substantial declines in population over the coming decades. Many are already experiencing slight declines, with the pace expected to increase from now onwards. The graph below illustrates the population levels based on a medium variant growth/decline path – that is, the option at the center of the UN-assessed probability spread. 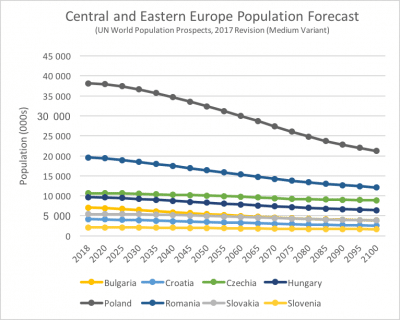 Although there are a range of predictions based on different population growth (decline) scenarios, the effect of the comparatively greater decline of CEE countries’ populations compared to the other EU Member States is also apparent. The medium variant forecast predicts CEE countries falling from their 23.2 percent of EU population in 2018 to 22.7 percent in 2025, 21.8 percent in 2035 and to under 21 percent by 2045, illustrated in the figure below. 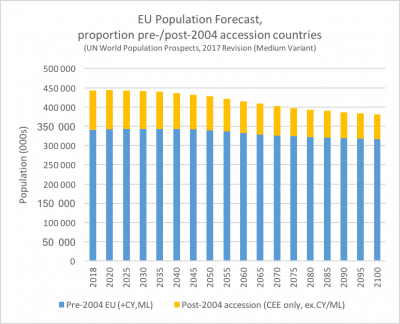 Work by the Vienna Institute for International Studies (Wiener Institut für Internationale Wirtschaftsvergleiche) has demonstrated the impact that EU Cohesion Policy has within CEE countries, as well as illustrating the slow progress in convergence towards the EU average. It is clear that CEE countries will continue to make a strong and ongoing push for EU funding (albeit that the Commission is proposing a 5% cut in Cohesion Policy funding for 2021–2027).

While EU budget negotiations are not conducted solely on the basis of population size or weighting, the proportion of the EU that is made up of CEE countries is likely to be at its highest for the current negotiations. On this alone, it is likely that the current round of negotiations represents the best chance that CEE countries will have to maximize their ‘share’ of the EU budget. But it may well also be their last chance. From now onwards, demographic decline is likely to accelerate and during the 2020s become increasingly apparent, reducing the bargaining strength of CEE countries for the next EU financial period.

Demographics aren’t destiny – but they certainly do have a lot to do with it.

Matthew Edwards is an independent analyst based in Vienna. He gained his bachelor’s from the University of York and master’s degree from King’s College, London. He worked for the UK Government in a variety of analytical and management roles before moving to the private sector where he worked for an international development consultancy firm.

The views expressed on AustrianCenter.com are not necessarily those of the Austrian Economics Center.
<span class="vcard rich-snippet