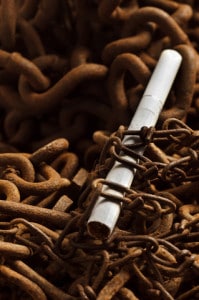 There is a delicious irony in that the same people who would ban the sale of a legal smoking product in drug stores, for health reasons, would promote the sale of an illegal smoking product, for health reasons. It has become non-pc to accept money from lobbyists for tobacco companies, but it is okay to take dollars from those promoting the legalization of marijuana. In fact, once Democratic politicos realized how much money they could get from trial lawyers for encouraging plaintiffs to sue tobacco companies, there was no need to help tobacco companies that had kept Southern Democrats in pocket change and in office for generations. Let it never be said that politicians do not know on which side of the bread butter has been spread. Politicians, who can bob and weave with the best, move in a straight line when it comes to money.

In February, CVS Caremark announced they would stop selling cigarettes and other tobacco products, a decision our smoker-in-chief Barack Obama characterized as a “powerful example.” The decision will cost CVS about $2 billion in annual sales, not really significant in a company that generates $126.7 billion in annual revenues, but still enough, possibly, to cost a few jobs. Of course, CVS may simply have anticipated what appears will become a “fait accompli.” San Francisco and Boston banned the sale of cigarettes in drug stores five years ago. And now Attorney Generals from 28 states are urging pharmacies in their states to follow CVS’s example.

Forgotten in the rush to cleanse the American consumer from the hazards of smoking is that it is not incidental to our economy. World-wide, tobacco sales are about $600 billion. If tobacco were a country, it would be a little larger than Sweden. Somewhere between 1.8 and 3.1 million jobs are in fields related to tobacco. The lower number is provided by the American Economics Group and the higher – not surprisingly – by the Tobacco Merchants Association. In the U.S., tobacco is grown on 10,000 farms in 16 states and, in 2011, contributed $17.8 billion to the coffers of states and the federal government. In 2011, they spent $8.4 billion in advertising and generated about $35 billion in profits. On the other side of the ledger – or perhaps not, depending on whose ledger one is reviewing – it is alleged that the annual economic cost of tobacco runs about $70 billion, in direct medical care and lost productivity. The former, of course, adds to the income of doctors and hospitals, while the latter is at best a guess. And tobacco has kept trial lawyers flush for decades.

Tobacco has already become less a factor in our lives. Per capita consumption of cigarettes in the U.S. peaked in 1963 (the year I stopped smoking) and has since fallen by half, while the population has increased by 68%. Nevertheless, 293 billion cigarettes were sold in the United States in 2011 – about 900 cigarettes for every man, woman and child.

What makes this of particular interest is that the same pharmacies that are getting out of the tobacco business are now lobbying for permission to sell medical marijuana – the substitution of one inhalant for another. Under current laws, drug stores are prevented from selling a product that is labeled a Schedule 1 substance under the Controlled Substance Act, which marijuana is. The Justice Department has defined Schedule 1 drugs as having “no currently accepted medical use and high potential for abuse.” Since all doctors and pharmacists must be licensed by the Drug Enforcement Administration, they could lose that registration if they were found selling pot under its more euphemistically acceptable term, cannabis. Should drug stores lose their license, they would be prohibited from selling any controlled substance, like prescription drugs. Adding to the confusion that only a Dr. Seuss could unravel and explain, twenty states have now approved marijuana, a substance banned by the federal government. Does anybody, apart from lawyers who make a living disentangling the innocent from mazes they create, appreciate the befuddlement that is the DEA?

While ether was first used as an anesthetic in 1846, it wasn’t available widely enough for the demand created by the Civil War; so that field surgeries and amputations were often done with nothing more than getting the unfortunate patient drunk. Wisely or not, whiskey could usually be found among soldiers at the front. Could it be that the medical uses of cannabis serve a similar purpose by doctors, as one of its oft touted properties is as a pain reliever? (Some of the promoters of the purported benefits of marijuana give it the elements of a magic elixir, claiming it will cure everything from Alzheimer’s to ADHD.) I have nothing against the casual use of marijuana anymore than I do against having a glass of bourbon or wine. But these are intoxicants and they can and do affect behavior. To pretend that they don’t is to deny empirical evidence.

It has been the two or three million dollars a week being received by Colorado that has caught the attention of those like New Jersey State Senator Nicholas Scutari who recently introduced a bill permitting the sale, possession and use of marijuana for recreational purposes. He described the taxes from the sale as a “financial windfall” for the state. (What is needed is financial responsibility, not windfalls!) Anybody want to bet whether funds related to pot sales, after expenses, will be used to reduce existing pension and debt costs? Taxing “sin” does not really work. Exhibit A is cigarettes. New York City has the highest cigarette taxes in the country. A report from the Tax Foundation says that nearly 57% of all cigarettes consumed in New York are brought in illegally. When costs are out of kilter, consumers look for alternatives. Exhibit B is casinos. Gambling is so lucrative governments now operate the world’s biggest lotteries. The risks are long-tailed, involving forfeited homes and broken families, ultimately extracting a social cost. Besides, lottery ticket sales, like cigarette taxes, are regressive, as promises of riches attract those who can least afford to lose. Smoking offers moments of pleasure, while lotteries encourage one to dream unrealistic dreams.

We are a peculiarly mercurial people. In 1919 the Volstead Act, banning the sale of “spirits,” was passed, a piece of enabling legislation that allowed the 18th Amendment to the Constitution to go into effect. It was vetoed by President Wilson, but overridden by a Congress as dense then as they are today. It didn’t take long for the people to realize what a colossal mistake they had made. In 1925, H.L. Mencken wrote: “There is not less drunkenness in the Republic, but more. There is not less crime, but more. There is not less insanity, but more. The cost of government is not less, but vastly greater. Respect for law has not increased, but diminished.” Prohibition was only in effect for 14 years, repealed in 1933 by a three to one popular vote. Banning bad habits is not easy. If you leaf through old Life Magazines, or Saturday Evening Posts you will come across numerous ads for cigarettes, many with doctors talking about the health advantages of, say Camels over Lucky Strikes. Isn’t it possible that pot sold today as a health product won’t seem just as ridiculous in a few decades?

Alcohol, likewise, is a substance, the abuse of which we are frequently warned. Now we have government beginning to speak positively of marijuana, not just as something that can give pleasure, but as a product that might improve one’s health. Count me as skeptical. Jay Leno humorously noted: “But doctors warn pot smoking impairs young people’s thinking, which of course makes them more likely to sign up for ObamaCare.”

Personally, I am not a fan of smoking anything, but I see no reason for our habits to be dictated by government, and that includes soft drinks and fatty foods. If there is anyone alive who does not understand the risks of eating fast food three or four times a week or smoking tobacco, they must have been living under a rock; so I assume all soft-drink consumers and smokers are conscious of the risks they incur. Sadly, as an article in yesterday’s New York Times made clear, smoking is far more prevalent among the rural poor than it is in wealthy urban enclaves, especially along the two coasts. In part, taxes, which are heaviest in New York City, play a role, but I suspect the biggest culprit is education, which has been held hostage by teacher’s unions in too many places, and a concomitant lack of good jobs.

Education and a lack of jobs represent our most serious domestic challenges. Non-competitive Congressional districts and too many years in office have created a supercilious attitude in Washington. The unintended consequences of restricting fossil fuels has little effect on the wealthy, to whom energy costs are relatively minor, but have major impact on those who, for example, depend on coal mining for a living and to whom energy costs are a major part of their budget. It is easy to sit back in Washington, New York, San Francisco and Hollywood and complain about dirty energy; it is another to suffer the lack of opportunity and costs such arrogance breeds. Opportunity breeds optimism. Combined, they permit one to look into the future with aspiration. Absent, they create a sense of hopelessness.

Cigarettes, alcohol, and marijuana can all give pleasure and, in moderation, do no or little harm. Alcohol, when taken in moderation, according to some, may actually extend life. But all three can be addictive and all three can be harmful when abused. Learning why should be one of life’s earliest lessons. There is an element of truth in the saying, “live fast, die young!” (The words come from rapper Rick Ross’s song, but they are also the title of a chapter in a short book I highly recommend, The Long and the Short of It, The Science of Life Span & Aging, by Jonathon Silvertown.) As Silvertown notes, Jimi Hendrix, Janis Joplin and Amy Winehouse