“Poverty and the Relevance of Marriage” 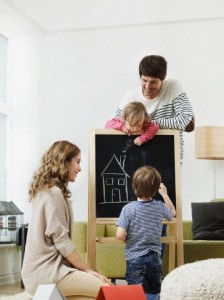 Taped to my shaving mirror is a saying; “The best thing a father can do for his children is to love their mother.” That simple homily is true, but its message has been lost in the narcissism of today’s world, and in the concept that social justice should not distinguish between the sexes. We see the absence of the former in the vapidity of Hollywood and in other displays of what Daniel Patrick Moynihan might have described as defining deviancy down. We see the promotion of the latter by those in Washington who see the state as the arbiter of equality and fairness.

Fifty years after President Johnson’s war on poverty, the poor are still with us. It is unrealistic to believe that poverty will ever be completely eradicated. For one, government statistics do change as a determinant. In fact, many of today’s “poor” would have been considered middle income fifty years ago. The important thing is allowing the poor the opportunity to advance. Apart from the eyes of the law and God, people are not equal. They never have been; they never will be. Despite primping for hours in front of the mirror, I will never look like Cary Grant, nor will I ever have the physique of Michael Jordan; I will never have the mind of Einstein, or the money of Warren Buffett. Not only are unlike in our inherited traits, we vary in our aspirations, work ethics and determination. We are who we are. But we can always work to improve.

Poverty remains a serious concern. One antidote is marriage. According to Census data, 41.3% of female-only households with children under 18 lived in poverty in 2011, while only 10.9% of married couples with children under 18 did so. In terms of unemployment, 6.6% of those married over the age of 18 were unemployed. At the same time 17.3% of those separated, divorced or widowed were unemployed. Of those never married, 17.7% were unemployed. Marriage is not always possible, but it should be encouraged, not dismissed. While correlation does not mean causation, those statistics cannot be ignored.

Forty-two percent of all babies born in the United States are to unwed mothers. Young adult women between the ages of 18 and 29 produce 75% of those births, while only 8% are to teen-age mothers. Education makes a difference. Fifty-one percent of young women with only a high school degree give birth to a child out of wedlock, while only 8.3% of college graduates do.

The problem is not new. Marriage has been in decline for the last several decades. According to the Census Bureau’s 2011 American Community Survey (ACS) survey 51% of American adults were married, compared to 72% in 1960. Trend setters in Hollywood have created an environment where single parenthood is deemed socially acceptable and, in fact, heroic. It may be for a few of the very wealthy, but single motherhood has not been good for the poor. We have reached a sad point when marriage is deemed obsolete by 39% of Americans.

The real question: Why has marriage become so unattractive to so many? As one cynical blogger put it, marriage is “redundant;” it is like “the decoration on a wedding cake.” There are those who see ballot-box victories for same-sex marriages rendering archaic the definition of marriage as being the union between a man and a woman. Others argue that a ceremony and a piece of paper is no guarantee that togetherness will endure. Marriage is not needed, they claim, to legitimize a relationship. There are no guarantees, but statistics show that children are better off in a two-parent household and that marriage lessens the chances of living in poverty. There are some who blame the decline in marriage on the high divorce rate. But the divorce rate has stabilized (albeit at a high rate) in the last two decades and has, in fact, declined in the past decade among wealthier Americans.

Attitudes toward marriage are reflective of our culture. The Left, searching for issues to galvanize their base, have been using a fictitious “war on women.” Their claim is that Republicans want to return to the 19th Century (or perhaps prehistoric times), in terms of men’s treatment of women. At the same time, they are willing to accept the sexual cravings of someone like President Bill Clinton, who had the morals of a billy goat and treated a female intern as a sex object.

When Democrat women lie about their past, like Elizabeth Warren and Wendy Davis, their transgressions are ignored. When Republican women show strength of character like Sarah Palin, they are demonized, trivialized and insulted. In Ms. Palin’s case, mainstream media chose to ignore the fact that as Governor of Alaska she single-handedly took on the big oil companies and won. There is a “war on women,” but it is engaged by those on the Left who see every female who supports conservative causes as a turncoat. Their vilification may be working in much of the media and among coastal elites, but it is not working across most of the country. In the past fourteen years 18 women have been elected governors, 10 Republicans and 8 Democrats. Currently five states have women governors, four of whom are Republicans. In their bid for the women vote, the Left has emphasized dependency and downplayed respect and responsibility. They see women as victims. The attitude of the Left can be seen in the video, “The Life of Julia.”

It is obviously true that the ideal of the traditional family can never be achieved by all. But its decline has reached levels that are shocking, at least to this geezer. In 1970, 79% of all American adults (those over 18) were married. Today, the number is 52%. In part, that difference reflects the fact that people are older when they marry. In 1960, the median age for a first marriage, for both men and women, was early 20s. In 2011, the median age for women was 26.5 and for men, 28.7. But the decline in marriages is more a consequence of our culture and the moral fiber that connects us, and is responsible for the unnecessary poverty that encompasses too many of our citizens.

There is no question that women should receive the same pay for the same work and there is no question that male chauvinism persists in some quarters. But we cannot forget that the principal biological purpose of any species is its propagation. For humans that means children, and statistics suggest that a household consisting of a married mother and father is best for raising them – and best for the parents. Mr. Obama is an exception in that he is the successful product of single motherhood. But it should be lost on no one that he and his wife have chosen to raise their two daughters within the confines of traditional marriage. In this regard, theirs is an example worth emulating.

I have been fortunate – nearly fifty years of marriage that has produced three children and ten grandchildren. Marriage requires effort. It requires a commitment not known to those who simply cohabit. It has its ups and its downs; it has tears and laughter. It is a wonderful and fulfilling institution. When I think of what might have been and then look at my wife and see what is, I am in sync with that old French saying, “Vive la difference!”

The views expressed on AustrianCenter.com are not necessarily those of the Austrian Economics Center.
hayek_admin2014-01-31T13:08:08+01:00