The freedom of the press is attacked all around the world. The recently released 2019 edition of the Press Freedom Index shows once more a decline in press freedom – a trend which has been holding on for many years. As the Reporters Without Borders, who compile the index every year, write, “hatred of journalists has degenerated into violence” at this point, “contributing to an increase in fear.” In the meantime, “authoritarian regimes continue to tighten their grip on the media.”

The attacks on the freedom of the press are undoubtedly shocking. Most of the Western world considers – or at least considered – it as a fundamental principle of any free society. And yet, especially in the West, the principle has been losing value recently. Journalists are frequently murdered for their reporting – mostly for criticizing the governments, from the brutal rape and murder of Viktoria Marinova in Bulgaria and the murder of Slovakian journalist Ján Kuciak last year, to a Maltese reporter in 2017 killed by a car bomb and a recent death of a Northern Irish journalist, who was shot on the open street during riots.

The way governments like those in Hungary, Russia, or Turkey have handled opposition voices in the press has been well-documented, with clampdowns on free media outlets which are often expropriated, arrests against those unwilling to comply, and other policies trying to constrain journalists to do the job. Less known are increasing demands from politicians in supposedly still free countries to give way of unconstrained press freedom. For instance, EU politicians have proposed regulations on the press, and the Commission President Jean-Claude Juncker said that “press freedom also has its limits.” Jeremy Corbyn, the Labour leader in the UK, argued that “change is coming” to the British press whenever he becomes Prime Minister. There is no need to further comment on the attitude of the White House.

With press freedom on the decline around the globe – and now also in the Western world – it seems natural to look for solutions, to try to safeguard one of the most important building blocks of any liberal society. As George Mason, one of the Founding Fathers of the U.S. said, “the freedom of the press is one of the bulwarks of liberty,” and Samuel Adams thought that “there is nothing so fretting and vexatious, nothing so terrible to tyrants … as a free press.”

It does jump out when looking at the new ranking from the Reporters Without Borders that in general, the more economically free a country is, the freer is the press, too. Comparing the country scores in the Press Freedom Index with the scores in the Index of Economic Freedom from the Heritage Foundation shows a clear relationship between the one and the other. 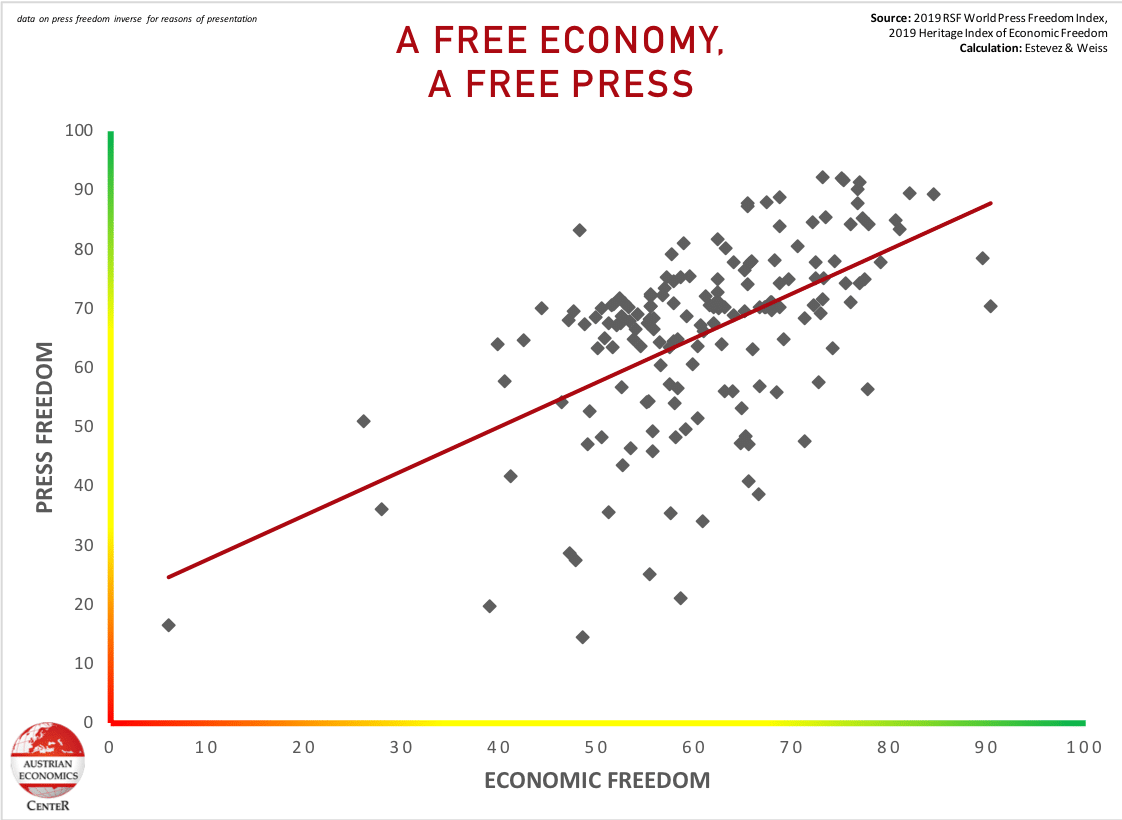 The “coincidences” continue when looking at what countries are doing particularly well and which ones are not. Norway, Finland, Sweden, the Netherlands, and Denmark represent the five countries worldwide with the freest press, closely followed by Switzerland and New Zealand – all functioning market economies with a considerable amount of freedom in both economic as well as social affairs (despite what the likes of Bernie Sanders or Bill Maher say). 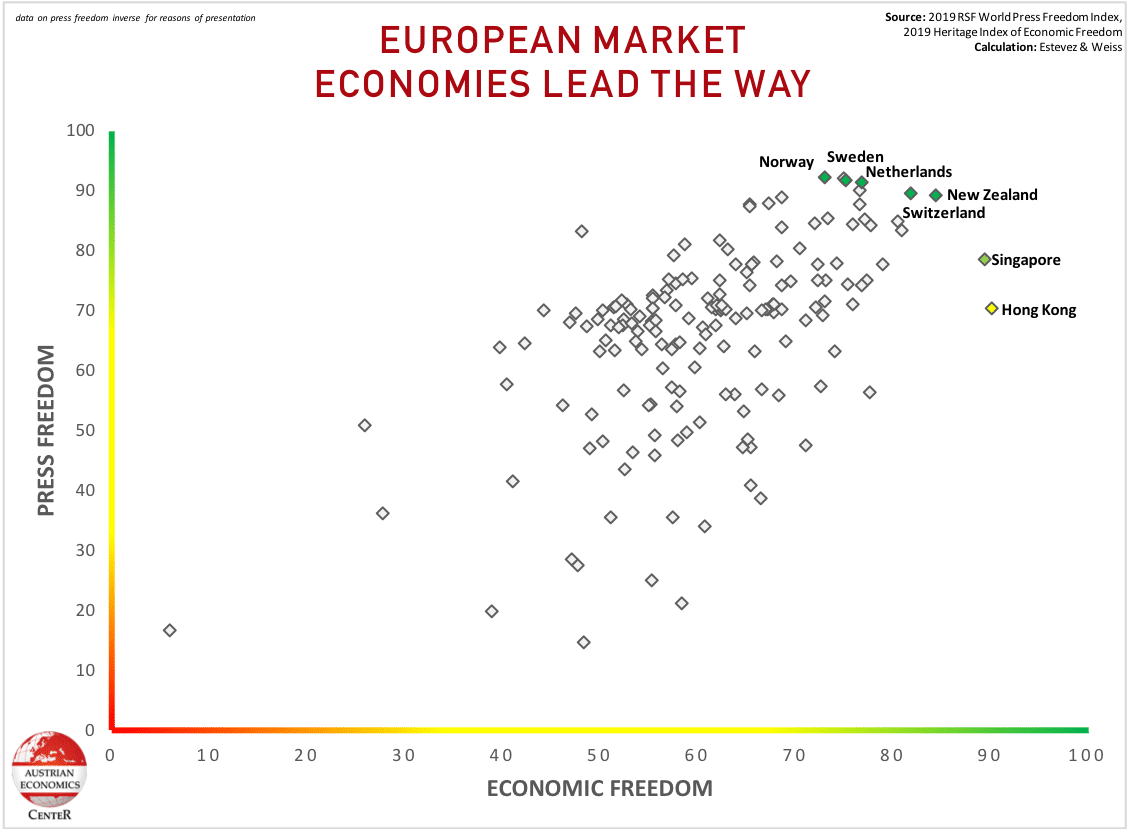 Worst are meanwhile countries that can be considered anything but economically free, from Turkmenistan over North Korea to China and Eritrea. Venezuela, a country that has been suffering complete chaos for several years thanks to socialism but has reached new levels of authoritarian tendencies in recent months, fell in the rankings and is now at number 148 in press freedom around the world (with 180 ranked). 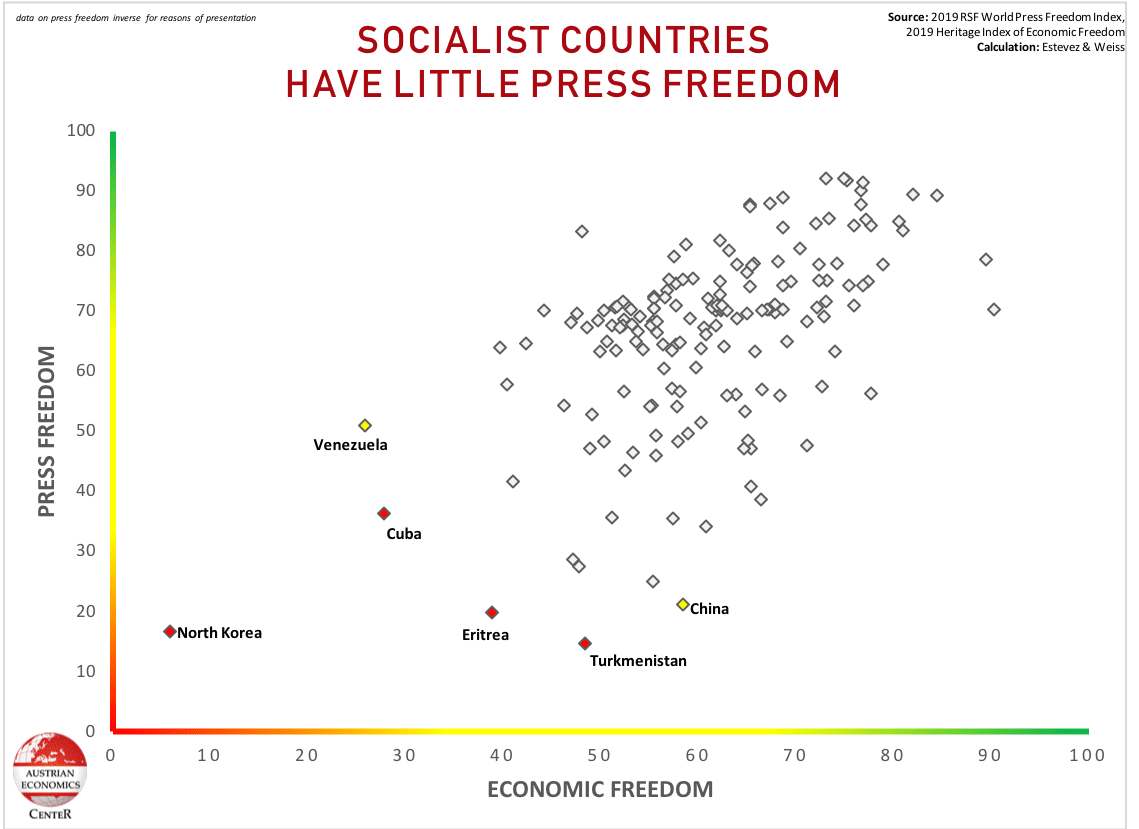 All of this is not overly surprising. As Ludwig von Mises wrote in The Anti-Capitalistic Mentality, “a free press can exist only where there is private control on the means of production,”  i.e. in a system based on secure private property rights. Indeed, noted Friedrich Hayek, “there can be no freedom of press if the instruments of printing are under government control.” The moment the media is pr