Prodigal Families and Comical Tragedies: The Cannibalization of the Price of Capital

Rembrandt’s painting portraying the return of the prodigal son is an amazing and monumental piece of art. It signifies the most joyful moment of reuniting a family and starting a new chapter/direction in everyone’s life. No matter how many times someone has seen the original s/he cannot refrain from seeing it again at the Hermitage if they happen to be in St. Petersburg. I have a copy in my living room, and I often go close by to see the amazing hands of the father-figure in the picture. Here is a closer look at those hands:

The left masculine hand is synergized with the right motherly hand to welcome the son back home and start a party that could last for years to come. But what happens when the whole family is a prodigal one? What happens when the whole family for many years has been wasting its resources, has accumulated too much debt, has ruined the future of the grandkids by devouring the assets and the wealth that previous generations had accumulated? Who will hold the parents accountable? Who will hold the EU accountable for the mess they have created by cheapening credit and loading up future generations with unsustainable debts and a bankrupt banking sector?

The prodigal son (Greece) is asked to return home to a drunken family in order to take another loan of €7.2 billion and give it back to the parents so that they can buy more booze and give it to their children. And my question is: When will this schizophrenia stop? When will someone wake up form this nightmare and say “Enough, it’s time to clean house. It’s time to stop covering up our messes and kicking the can down the road. It’s time for the symphony of liberation from the Eurocrats to sound loud and clear in the European land”.

In the beginning of this year, the back-and-forth exchanges and negotiations looked like an unfolding tragedy. After five months, this long impasse looks more like a comedy among children who do not know what this is all about. The European Commission (EC) may call the process “paperology” but to me it looks like more a comical tragedy resembling astrology. The EC and the ECB are seriously miscalculating the consequences of a Greek default. After all, they failed miserably in their predictions about the Greek economy and the impact of austerity. Their worshipping of the Euro as an end rather than as a means to and end, as well as the rush to save the European banks – whose equity is so fragile in the face of the synthetic assets they hold (let alone the non-performing loans that they refinance quite often so that they would be considered “current”) – may be the cause of all those miscalculations.

When Greece’s debt problems were finally revealed in late 2009, the debt-to-GDP ratio was below 120%. After six years of more loans (all of which were used to bail out foreign banks and other creditors) and strict austerity, the ratio is close to 180%. By definition the austerity package works when it is accompanied by debt relief and devaluation. These two conditions were not present for the Greek austerity program, so by default the program was doomed to fail. If Greece implements the new austerity measures demanded by its creditors, the ratio will skyrocket to over 200%! This is absurd and ridiculous. Let’s not forget these are the same creditors who were pushing loans at 7-8% interest rate when the country’s GDP was declining at a 5% annual rate!

An existential threat is hanging over the EU’s head and it’s not Greece alone, but the unraveling of an awkward union that put the cart before the horse and at a time when they were acknowledging that the EU was not an optimal currency area, they opted for a monetary union that distorted capital allocations and cannibalized the price of capital.

There are serious concerns if the Syriza government in Greece comprehends what it is doing. How could they when it is evident that their solution is more government waste rather than the liberation of the markets from authoritarian regimes that suffocate wealth creation? However, we cannot allow Greece to become an unstable failed state in such a vital geostrategic location and in the midst of uncertain times.

It is my belief that the EU has much more to lose than Greece if default takes place. Forget the €240 billion of the EFSF. Forget the guarantees offered by other EU nations that need to be paid up. Forget the almost €85 billion of the ELA (Emergency Liquidity Assistance to the Greek banks). Why aren’t we discussing the ramifications of the Target2 program that could become a financial bomb for all of the EU?

Let’s look at the balance sheet of the central bank of Germany. 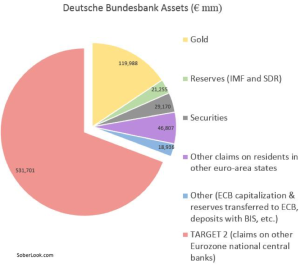 As evident from the graph above, more than 60% of Bundesbank’s assets are Target2 assets. What will happen when this inverted pyramid of credit assets starts shaking up with Greece’s default?

The EU family has misallocated resources, has lost control of the boat, has lost direction, and thus has cannibalized the price of capital. That cannibalization has forced the creation of pyramid schemes such as the Target2 whose unfolding would show to the world a drunken family-head who was obsessed with teaching his kids that booze a.k.a. more debt is good for them.

My only question is: Who will lock up the family’s head?