Proud to be an American: What Should It Mean? 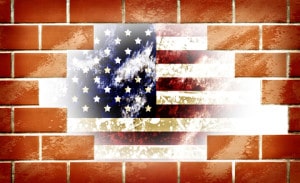 America! For more than two hundred years the word has represented hope, opportunity, a second chance, and freedom. In America the accident of a man’s birth did not serve as an inescapable weight that dictated a person’s fate or that of his family. The individual owned his own life and was free to shape it as his own mind guided him.

Once a newcomer stepped on American soil he left the political tyrannies and economic barriers of the “old world” behind. A willingness to work hard and to bear the risks of one’s own decisions, the possession of a spirit of enterprise, and a little bit of luck were the keys to the doors of success in their “new world” home.

Visitors from Europe traveling to America in the 19th century, Frenchmen like Alexis de Tocqueville and Michel Chevalier, marveled at the energy and adaptability of the ordinary American. An American paid his own way, took responsibility for his actions, and showed versatility in the face of change, often switching his occupation, profession, or trade several times during his life, and frequently moving about from one part of the country to another.

What’s more, individual Americans demonstrated a generous spirit of benevolence and voluntary effort to assist those who had fallen upon hard times, as well as to deal with a wide variety of common community services in their cities, towns, and villages.

Those foreign observers of American life noted that no man bowed to another because of the hereditary accident of birth. Each man viewed himself as good as any other, to be judged on the basis of his talents and abilities as well as his character and conduct as an individual human being.

Even the scar of slavery that blemished the American landscape through more than half of the 19th century stood out as something inherently inconsistent and untrue to the vision and conception of a society of free men laid down by the Founding Fathers. The logic of liberty meant that slavery would eventually have to end, in one way or another, if the claim of freedom for all was not to remain confronted with a cruel hypocrisy to the ideal.

A Land of Free, Self-Made Citizens

What a glorious country this America was. Here was a land of free men who were able to pursue their dreams and fulfill their peaceful desires. They were free men who could put their own labor to work, acquire property, accumulate wealth, and fashion their own lives. They associated on the basis of freedom of exchange, and benefited each other by trading their talents through a network of division of labor that was kept in order through the competitive processes of market-guided supply and demand.

In this competitive marketplace, the creative entrepreneurial spirit was set free. Every American was at liberty to try his hand, if he chose, to start his own business and devise innovative ways to offer new and better products to others in the market, through which he hoped to earn his living. No man was bond to the soil upon which he was born or tied to an occupation or profession inherited from his ancestors. Every individual had an opportunity to be the master of his own fate, with the freedom to move where inclination led him and choose the work that seemed most profitable and attractive.

The Turn Toward Collectivism

Then something began to happen in America. The socialist and collectivist ideas that were growing in influence in Europe during the last decades of the 19th century began to spread over to the United States. Two generations of young American scholars went off to study in Europe, particularly in Imperial Germany, in the 1880s, 1890s, and early 1900s. They became imbued with socialist and state paternalistic conceptions, especially the interventionist and welfare statist ideas that were being taught at the universities in Bismarck’s Germany.

These scholars came back to the United States enthusiastic about their newly learned ideas, convinced that the “negative” idea of freedom dominant in America – an idea of freedom that argued that government’s role was only to secure each person in his individual right to life, liberty, and property – needed to be replaced by a more “positive” notion of freedom.

Government should not merely protect citizens from violence and fraud. It should guarantee their health care and retirement pensions; it should regulate their industry and trade, including their wages and conditions of work. The government needed to secure the members of society from all the uncertainties of life, “from cradle to grave” – a phrase that was first popularized during this time.

These European-trained students and academics soon filled the teaching positions in the colleges and universities around the country; they occupied a growing number of jobs in the federal and state bureaucracies; they became the fashionable and “progressive” forward- looking authors of books and magazine articles; they came to dominate the culture of ideas in America.

The Rationale of Relativist Change

How did they sway an increasing number of Americans? They asked people to look around them and observe the radical changes in technologies and styles of life. They pointed to the rapid shift from the countryside to growing urban areas. And they asked, how could such a transformed and transforming society remain wedded to the ideas of men who had lived so long ago, in the 18th century? How could a great and growing country be tied down to a Constitution written for a bygone era?

The Constitution, these “progressives” argued, had to reflect the changing times – it had to be a “living” and “evolving” document. Progress, for these proselytizers of Prussian paternalism, required a new political elite who would guide and lead the nation into a more collectivist future.

The Fruits of Collectivism in America

One hundred years ago, government hardly regulated and controlled any of the personal and commercial affairs of the American citizenry. Now, government’s hand intrudes into every corner of our private, business, and social affairs. Indeed, it is hard to find one area of our daily lives that does not pass through the interventionist sieve of state management, oversight, restriction, and command.

Perhaps worst of all, too many of our fellow Americans have become accustomed to and, indeed, demanding of government protection or subsidy of their personal and economic affairs. We are increasingly no longer free, self-supporting individuals who solely make our own ways through the peaceful transactions and exchanges of the marketplace.

We have become collective “interest groups” who lobby and pressure those in political office for favors and privileges at the expense of our neighbors. And the political officeholders are only too happy to grant these political gifts to those who supply campaign contributions and votes as the avenue to their own desires for power and control over those whom they claim to serve.

It is sometimes said, “But we are still the freest country in the world. Our wealth and standard of living are the envy of tens of millions all around the globe. We should be proud of what and who we are.”

The Standard for Judging America

Our present greatness in terms of these things, however, is only relative to how much farther other countries have gone down the path of government paternalism and regulation during these past one hundred years.

The benchmark of comparison should not be America in relation to other countries in the contemporary world. The standard by which we should judge our freedom should be how much freer the American people were from the stranglehold of government more than one hundred years ago, before those proselytizers of paternalism began to change the political and cultural character of the United States.

By this standard, today’s American people are extremely unfree in many aspects of their life. Of course, there have been important, valuable and even essential economic, social and cultural improvements for many individuals and groups in American society, who one hundred years ago still suffered from various degrees of racial, social or ethic bigotry and politically enforced discrimination. Many of these wrongs are now gone, or at least far less than in that earlier time.

But the fact remains that over many areas of our personal, social and especially economic activities we have all become increasingly wards of the state. And like the convict who has spent so many years in prison that he is afraid of being released and no longer having his jail keepers to tell him what to do and how to live, we are fearful of even the thought of a life without government caring for us, protect