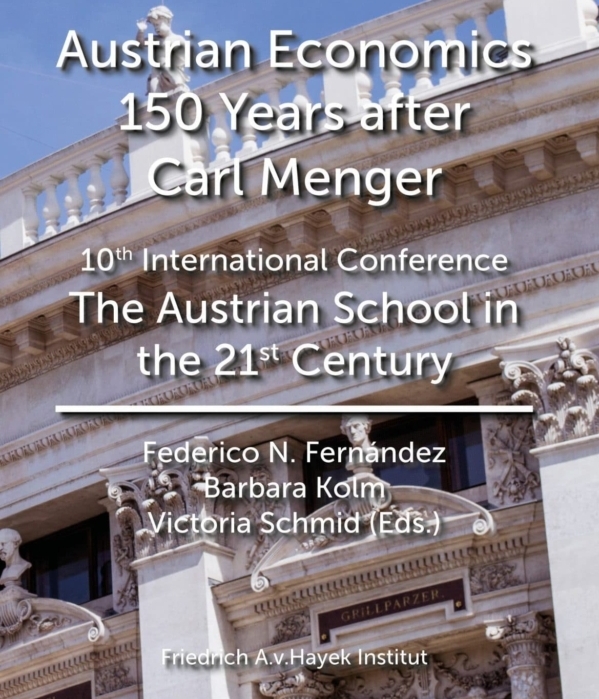 Commemorating the work of a great thinker is no easy task. Great thinkers enjoy their repute since they have set the bar high. Carl Menger (1840-1921), who published the founding text of the Austrian School of Economics, Principles of Economics, 150 years prior to this volume, is one such great thinker. The 10th International Conference “The Austrian School in the 21st Century” in November 2021 saw a rich diversity of panels and papers devoted to Menger’s life, works, and legacy.

Austrian Economics 150 Years after Carl Menger, with over thirty contributions from an international body of scholars, is the continuation of that legacy. Some chapters celebrate Menger by engaging directly with his ideas or applying them to current affairs. Meacci examines one of Menger’s less appreciated texts on capital theory (Zur Theorie des Kapitals, of which, alas, a full English translation still does not exist), probing Menger’s concepts of acquisitive and productive capital and the criticisms of Menger raised by Böhm-Bawerk, Hayek, and Stigler. In his contribution, Corvalán draws on the work of Larry Laudan and sees the Methodenstreit as a piece of a larger conflict between traditions in intellectual history. In this respect, what had be casually written off by Schumpeter as “a history of wasted energies” gains new importance for the present day. Tóth sees in Menger’s works, particularly his understanding of capital, a useful corrective to the Marxist-inspired dichotomy between capitalists and workers, where the latter are understood to be exploited by the former. Instead, Menger’s ideas enable us to conceptualize workers as life-entrepreneurs who are hardly exploited but rather have the agency and ability to acquire wealth and advancement themselves.

Menger’s legacy was honoured also by chapters on economic issues dear to him, such as money and capital. Blech examines price volatility and the nature of money in order to better understanding Bitcoin. Similarly, Hansen draws on Mises, Rothbard, and Salerno to clarify the distinction between exchange demand for money and reservation demand for money before applying it to secondary media of exchange, thereby attaining to a deeper understanding of the relation between reservation demand and the quality of money. This framework is also conducive to analyzing Bitcoin. In one of his chapters, Ninov presents an alternative Austrian theory of capital, adding to the rich insights on the subject raised by Menger, Böhm-Bawerk, Mises, Hayek, and Garrison.

Other chapters extend Austrian School ideas to a diverse array of fields. Walsh and Brady question the traditional hierarchy-based notion of the firm, which has affected our view of the larger market order. They argue instead that it could be fruitful to view the matter in the opposite direction, by starting with the free and spontaneous order of the market and realizing a similar dynamic at work within the firm itself. Kónya reconciles the different criticisms that Mises and János Kornai had of socialist calculation in order to identify market forces that could play a role in aiding economic planners. Advances in complexity economics have furthered the critique of mathematical modelling in economics. Along these lines, Moreno-Casas sees a link between complexity economics and Austrian economics, whose subjective foundation, he argues, is compatible with the computation and agent-based modelling of complexity economics. But mathematics is not always spurned by Austrian economists: in his chapter, Krainer extends Austrian Business Cycle Theory to develop a model based on the capital asset pricing model, rational expectations, and linear homogeneous production functions. Similarly, Wiese employs mathematics to connect the agent-based modeling of Joshua M. Epstein with the Austrian approach, applying it to plans for mining and using tin. Mathematical formulae also make way for philosophy: in Sammeroff’s contribution, Mises meets Marx, dissecting the German economist-cum-prophet’s narrow sociology and philosophy of history. For all of Marx’s errors, there are dimensions to his thought that resonate with critics of the technologization of society.

The ongoing covid situation also produced chapters on the post-pandemic economy (Rassiga), institutional unemployment and its relevance during the pandemic (Wéber), the pandemic and populism in Spain (Puente), the application of Hayek’s critique of scientism and the fatal conceit to the socialist measures taken during the pandemic (Kibbe), and the general problem with experts and scientism in the “post-truth” age (Nicholson).

Other chapters concern reflections on our time and future perspectives. Saudino links the methodologies of Popper and Mises to their respective political philosophies and argues that the liberal cause would be aided by mending the fatal split between their views. On the future of the EU, Turk makes the case that while the early EU adhered to Hayek’s ideas regarding interstate federation, the EU of today would do well to return to the notion of spontaneous evolution, or else it risks undoing the progress it has made even when it comes to peace and prosperity. Nelson and Corvalán see threats from another corner – namely, the hard and fast push towards renewable energy. Their focus, however, is not on the climate change debates underlying the renewable transition, but rather on its geopolitical consequences.

Austrian Economics 150 Years after Carl Menger is introduced by two keynote chapters. Holzmann’s is highly topical in its analysis of the natural interest rate, or why policy rates are so low. He argues that the decline in the natural rate of interest is responsible for low policy rates around the world and concludes with proposals on how to raise the natural rate of interest. On a more philosophical level is the contribution from Płonka on dialectics. An expansive intellectual history of dialectics going all the way back to the ancient Greeks, Płonka uses the permutations in thinkers’ understanding of the term, namely under the influence of Hegel and Marx, to account for the present disregard for truth and its connection to totalitarianism.

Menger once said that the man who is able to say that if he had seven sons, they should all study economics, must have been extraordinarily happy in his work. This volume attests to the rich legacy that Menger has left behind. He must be very happy indeed.