“Quanto Sia Vana Ogni, Quanto Fallace Ciaschedum Disegno”: The Economics of Turmoil, and the Financing of Dysfunctionalities in the Midst of Volatile Markets

Lorenzo the Magnificent (the scion of the Medici banking family), whose lending institution dominated not only Florence but much of Europe, was also a poet influenced by Horace and Catullus. The Latin phrase above reflects the first two lines of one of his sonnets. Here is a translation of the beginning of that sonnet:

“How vain is every hope, each breath.

How false is every single plan.

How full of ignorance is man

Against the monstrous mistress, Death”

I do not know if better lines can be found for the long-term prospects of global markets given their dysfunctionalities and uncertainties especially in Europe where the fetish mentality of worshipping at the altar of the Euro has become an end in itself, defeating the purpose of its birth. The concerns expressed in this commentary have a perspective of 18 months, without, however, implying that an implosion could not happen sooner than that.

Let’s first take a look at the total market cap of non financial corporations to the GDP ratio in the US. As the graph below shows that percentage stands now at about 126.2%, having exceeded the equivalent percentage prior to the financial crisis. 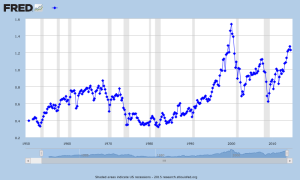 The ratio is considered an anchor regarding long-term valuations and Warren Buffett has said that “it is probably the best single measure of where valuations stand at any given moment”. Based on this measure, valuations seem to be lofty. However, given the easy money policies around the world, we may still have some room to grow.

Having said that, when we take into account the cyclically adjusted price-earnings ratio (CAPE), we discover that it has also reached levels not seen since the 2008 crisis, and hence the run up of the ratio since 2009 may also point out that a turning point could be approaching. As the graph below shows the only other two times when the ratio was higher was just prior to the 1929 crash and also prior to the 2000 bursting of the tech bubble.

The fact that financial repression via low interest rates is still going on – so that governments do not go bankrupt – gives a boost to the ratio that might have some room to rise given the turmoil in Europe, Asia, South America, and the Middle East.

The breakdown of models and narratives is characteristic of emerging dysfunctionalities whether found in the EU (where the German machine dumps its products to less competitive nations that get accustomed to easy credit policies), in Asia (where the Chinese growth model levels off), or in Latin and S. America where the commodities cycle has revealed the nakedness of the emperor.

We live in an age where thoughtful execution is disappearing for the sake of impressions and artificial thinking that says a common fiat currency can survive without political and fiscal union. The problem of course is that the economics of collapse have become very complex given the over-extension of credit, the overblown deficits, the complex world of derivatives, the enormous unfunded liabilities, and the co-dependency of nations. If a country (such as Greece) ends up repudiating its debts (e.g. if they run out of cash in the next few months), the whole European structure will shake badly given that the rule of law will no longer apply to debt repayments, leading to political disarray in the midst of a leaderless continent.

When you add to the above the geopolitical tensions from Ukraine to the Middle East, one can think that if a major crisis is to be averted, then the global economy needs a major bang in order for dormant capital to be awaken through radical reforms that free up assets, innovations, and resources in order for small and medium size enterprises to create and sustain jobs and profits.