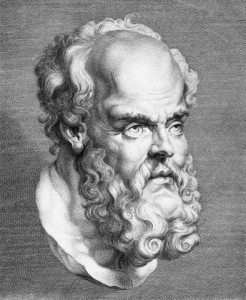 Engraving of a Head of Socrates — Image by © Bettmann/CORBIS

The ancient sage Socrates, a giant in the foundation of Western philosophy, was known for a teaching style by which he aggressively questioned his students. He employed his Socratic method as a way to stimulate logical, analytical thought in place of emotive or superficial pronouncement. Rather than lecture or pontificate, he would essentially interrogate. The result was to force his Greek pupils to see the full implications of their conclusions or to realize that what they had accepted as solid was nothing more than the intellectual equivalent of crumbled feta.

In his January 28 State of the Union speech, President Obama called upon the U.S. Congress to enact a hike in the hourly minimum wage from $7.25 to $10.10. (The dime may have been added because a nice round number without a decimal would sound unscientific.) Economists have long argued that raising the cost of labor, especially for small and start-up businesses, reduces the demand for labor (as with anything else). But Congress may do it anyway—with the usual, oversized measure of self-righteous breast-beating about helping workers. Maybe what members of Congress need is not another lecture on the minimum wage from an economist, but rather an old-fashioned Socratic inquisition. If the old man himself were with us, here’s how I imagine one such dialogue might go:

Socrates: So you want to raise the minimum wage. Why?

Congressman: Because as President Obama says, minimum wage workers haven’t had a raise in five years.

Socrates: Can you name one single worker who was making $7.25 five years ago who is still making $7.25 today? And if you can’t, then please tell me what caused their wage to rise if Congress didn’t do it. Come on, can you name just one?

Congressman: I don’t happen to have a name on me, but they must be out there somewhere.

Socrates: Well, we’ve just been through a deep recession because successive administrations from both parties, plus you lawmakers and your friends at the Fed, created a massive bubble and jawboned banks to extend easy credit. The bust forced many businesses to cut back or close. Now we have the weakest recovery in decades as ever-higher taxes, regulations, and Obamacare stifle growth. No wonder people are hurting! Do you take any responsibility for that, or do you just issue decrees that salve your guilty conscience?

Congressman: That’s water over the dam. I’m looking to the future.

Socrates: But how can you see even six months into a murky future when you refuse to look into the much clearer and more recent past? You guys think the world starts when a problem arises, as if you’re incapable of analyzing the problem’s origin. Maybe that’s why you rarely solve a problem; you just set everybody up to repeat it. If you really look to the future, then why didn’t you see this situation coming?

Congressman: Look, in any event, $7.25 just isn’t enough for anybody to live on. Workers must have more to meet their basic needs.

Socrates: An employer doesn’t have anything to pay an employee except what he first gets from paying customers. I wonder, whose “needs” do you consider when you decide to buy or not to buy: the workers’ or your own? Have you ever offered to pay more than the asking price just to help out the guy who made the product? And if customers like you won’t do that, where do you expect the employer to get the money?

Congressman: That’s not a fair question. My intent here is purely to help.

Socrates: Sounds to me like the answer is “no,” but let’s move on. Why do you assume your intentions mean more to a worker than those of his employer? It’s the employer who’s taking the risk to offer him a job, not you. You’re only making speeches about it. Don’t you see a little hypocrisy here—you, who are personally offering no one a job, self-righteously criticizing others who are actually creating jobs and paying wages even if they’re not all at a wage you like?

Socrates: Are you saying employees are not? Are they more interested in working for companies that lose money, and if so, then why don’t they all line up for government jobs?

Congressman: Well, we lose money here in government every year and there are plenty of people who are happy to work for us.

Socrates: You have a printing press. You also have a legal monopoly on force. When you borrow in the capital markets, you shove yourself to the head of the line at everybody else’s expense. Are you saying these are good things and that we’d be better off if the private sector could do these things too? Try to keep up with me here.

Congressman: I repeat, employers are interested only in profits. People before profits, I say! I even have a bumper sticker on my car that says that.

Socrates: So are you saying that employers would be better people if, instead of seeking profits, they tried to break even or run at a loss? How does that add value to the economy or encourage risk-takers to start a business in the first place?

Congressman: You’re trying to belittle me but I went to a state university. All of my sociology, political science and gender studies professors told us that raising the minimum wage is good.

Socrates: Were any of those tenured, insulated, and government-funded pontificators actual job-creating, payroll tax-paying entrepreneurs themselves, ever?

Congressman: That’s beside the point.

Socrates: Yeah, like you guys in government check your personal ambitions at the door when you take office. I’d like to know how you arrived at that number. Was it some sophisticated equation, divine revelation or toss of the dice? Why didn’t you choose $20.00, which is not only a nice round number but also a lot more generous?

Socrates: It sounds like you think the cost of labor might indeed affect the demand for it. Good! That’s progress. You’re not as oblivious about market forces as I thought. What I want to know is why you apparently don’t think higher labor costs matter when you raise the minimum wage from $7.25 to $10.10. Do you think everyone, regardless of skill level or experience, is automatically worth what Congress decrees? Do you believe in magic, too? How about tooth fairies?

Congressman: Now hold on a minute. I’m for the worker here.

Socrates: Then why on earth would you favor a law that says if a worker can’t find a job that pays at least $10.10 per hour, he’s not allowed to work?