The Ramifications of a Potential Chinese Slowdown

The latest data from Chinese economic activity came in below expectations and point to a possible further slowdown for the next year. Specifically, infrastructure spending dropped and this weighed down industrial production. As fiscal policy becomes less supportive and as credit growth continues decreasing, it is anticipated that economic data in the future will portray a picture of an economy in transition trying to avoid a hard landing.

We – like most analysts – have reservations regarding the quality of the data; however, the downbeat tone in production and demand (both domestic as well as for exports) is evident in most of the economic series. Fixed investment spending slowdown implies an annualized drop of more than 40%.

As shown below, in particular areas such as automobiles and mobile phones the drop in industrial output between 2016 and this year is significant. Moreover, in real terms private investments turned negative. 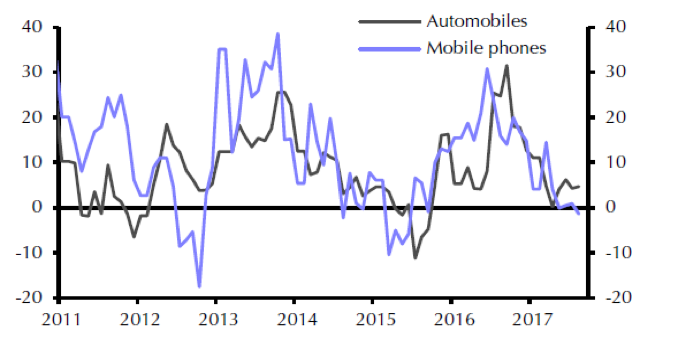 The tone is even subdued in real estate and retail activity as shown in the following two graphs.

To some extent, this slowdown may be healthy as it also slows down the financial excesses of previous years and does not asphyxiate banks further given the numbers of non-performing loans on their books. Specifically, the dubious projects that were completed within the last ten years (worth more than $6 trillion) cannot be sustained and do not generate enough earnings to pay for themselves. Consequently, banks’ balance sheets suffer and hence any further push for credit extensions exacerbates a serious problem.

As President Xi pushes his reform agenda at the Party Congress next month and then again at the Central Economic Work Conference in December and the Third Plenum next year, one thing will become clearer: As efforts to avoid a hard landing are intensified, China’s trajectory becomes questionable. If Xi’s choice for “first secretary”/successor (Chen Min’er) is bypassed in favor of Hu Chunhua, then the potential political turmoil could magnify the slowdown.

Given the current valuation, the echoes of war in a leaderless world, and the tensions in several spots around the globe, we are of the opinion that risk parity considerations should be taken into account in asset allocation and a more conservative approach with greater precious metals allocation is warranted at this juncture.