Current financial and economic conditions in the US as well as in the EU are conducive to higher growth in the second half of the year. In addition, the shaping up of similar conditions in Asia and some other emerging and frontier markets point to a coordinated upward trend that will fuel consumption, lower unemployment rates, and raise expectations. This kind of news and expectations will probably raise inflation which is something the markets seem to desire. Of course, one should be cautious what one wishes, because history tells us that if unemployment falls below 4% (referring of course to US markets), then inflation may take off which could bring financial disturbance, especially in fixed income markets.

The central banks’ challenge (a.k.a. the holy grail of central banking) is to recalibrate expectations and apply policy that will keep things progressing smoothly (soft landing). The problem is that once unemployment starts rising, it keeps on rising, which lowers incomes and expectations and reduces investment spending and sentiment. Thus the downturn starts, and it is intensified if year-on-year earnings growth also takes a a downturn (as a normal consequence of the steps described above).

The situation described above tends to be further amplified when imbalances exist. So when we try to understand the dynamics of imbalances today, we observe that on one hand they may not be as bad as in 2007; however, some cracks have started appearing, such as household and corporate debts (as a fraction of income). As debt is rising, so are the delinquencies, which normally are accompanied by higher defaults.

From a metrics standpoint, one benchmark that concerns us is the rising Debt/EBITDA ratio as shown below. 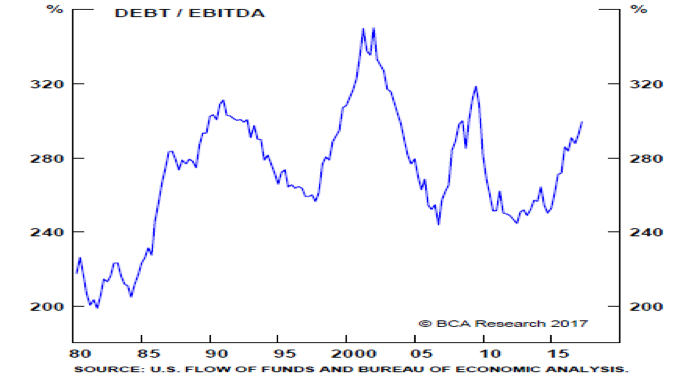 As shown above, this critical measure has surpassed the 2000 level and is approaching the 2007 level. If the Debt/EBITDA ratio keeps increasing, then the earnings expectations will decrease which could be the beginning of the downturn.

Another area of concern is commercial real estate (CRE), especially when we take into account that financial institutions hold $3.2 trillion in CRE loans, and as a share of GDP that figure stands pretty close to the pre-crisis levels.

In conclusion, our expectation is that by design or coincidence a fiscal booster may arrive at a time that credit conditions are tightening, which may imply a smoother transition to the next business cycle. If that were to happen, then the recession may be delayed further and the markets could continue their upswing. Of course, postponing a recession during times of overstretched markets means that the financial downfall when it happens might be much bigger than the economic downturn, amplifying the latter through the wealth effect. As for other markets, given the high correlations among stock indexes and the fact that their beta exceeds 1 in some cases, we would expect that as risk sentiment deteriorates, other markets could suffer more than US markets, which may point to a projection that neither the ECB nor the Bank of England or the Bank of Japan will raise rates for the rest of the decade.