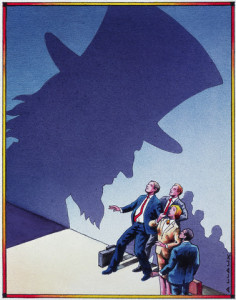 “For want of a nail,” goes the old English proverb, “…a kingdom was lost.” Poor tactics can have unintended consequences. Defunding ObamaCare may have been a noble cause, but it served as a distraction to the far more important war in which the Left and the Right are engaged. The crux of the problem is the size of government and its role in our everyday lives. ObamaCare is symptomatic, but is far from the only problem.

Kimberley Strassel, in Friday’s Wall Street Journal, aptly compared the head-long charge of Tea-Party Republicans, in their bid to defund ObamaCare, to the “brave 600” of the Light Brigade who rode bravely, but futilely, against the Russian guns at Balaclava during the Crimean War. As she ends her op-ed: “Brave charges mean little if they aren’t followed by victory.” In an editorial in last weekend’s Barron’s, Thomas Donlan noted that the stock market considered the shut-down and the threat of breaching the debt ceiling a non-event. In fact, given the rise in federal borrowings on Thursday night, it would be fair to say the ceiling had already been violated and the market knew it, even if the media did not. Between September 30 and last Wednesday afternoon, the S&P 500 was up 2.4%, better than its average monthly gain this year – one of the best years on record! And this despite Mr. Obama doing his best to talk the market down.

Regardless of Republican’s defeat in attempting to defund the program, ObamaCare is a mess. Its original purpose may have been well-intentioned, but its roll-out has been a disaster, despite three years of planning. Logging on for most people has been nearly impossible, in part because individuals are required to supply personal data that then must be verified to determine eligibility for subsidies. When someone does get on-line they find that the insurance costs on 43 of the state exchanges, including Connecticut where I live, are higher than existing plans. The reason has to do with required provisions that many people don’t want or need. Medicare may not be eviscerated, but it appears that reimbursements will be reduced, effecting providers and, therefore, care. Taxes have already been raised and will rise further. The very fact that government employees, including our House and Senate representatives do not have to comply by the same rules as the rest of us is criminal – a fact that Republicans should exploit. There was a time when public servants were just that – public servants. Today, the impression our leaders give is that we work for them – which we do, in that many of us must spend the first few months of every year laboring only to pay the salaries of government employees.

Nevertheless, there is no question that the old healthcare system was unfair, expensive and didn’t work very well. Corporate plans were not transferable; so those with preconditions were left uninsured when they left their jobs. While health insurance is a deductible expense for corporate plans, it is not for individuals. Consumers, in corporate or government plans, have little concept of the costs of drugs, procedures, or even doctor visits, apart from a nominal co-pay. Those plans were essentially “one-size-fits-all.” Uninsured people would go, at great cost, to emergency rooms. Insurance companies were prevented from competing across state lines. It was a system begging for reform. But instead of creating a system that incorporated the best of the private sector – such as allowing insurance companies to compete across state lines, encouraging the development of clinics to compete with emergency rooms and allowing individuals and families to tailor-design insurance plans for their specific needs – Mr. Obama and his team decided that only a system with government-established exchanges would do, mandating what would and would not be covered and what reimbursement rates would be. Setting prices by fiat does not have a happy history.

ObamaCare deserves to sink from the very weight of its complexity, but attempting to defund it at this time was a poor tactic. A consequence was that Democrats appeared as the sensible, caring and sane Party, with Republicans appearing their opposites. However, if a sufficient number of young, healthy people with no need for insurance do not sign up, ObamaCare will collapse.

Republicans face a considerable foe in the person of Mr. Obama and his minions. He is capable of saying what all want to hear: In conciliatory tones he claims the middle ground, talking about the unsustainable costs of entitlements; yet he increases the reach of government. He claims to be the “cool” guy in the room (besides being the smartest) – the individual who can reach across aisles; yet when he claims Republicans have put a gun to the head of the American people he belies his Chicago political roots. America has not been this divided in 150 years. Mr. Obama’s two legacy programs passed Congress without a single opposition vote. He can, so he has told us, cause the waters to recede and the earth to cool; yet fewer people have jobs than when he came to office, and the Middle East is more dangerous than five years ago – and the earth is no cooler. Yet, he seems invincible. When challenged, the challenger is often accused of racism, as we heard from that eminent political commentator Robert Redford last Thursday and as Vice President Joe Biden declaimed a year ago: “Republicans will put y’all back in chains.”

Following a defeat such as Republicans experienced, it is common to self-examine one’s actions, to reassess one’s priorities. But after a few hours of navel-gazing and wallowing in self-pity, Republicans should focus on the road ahead. We live in an ‘Age of Lois Lerner’ (to borrow a phrase from Peggy Noonan). Ms. Lerner, in subverting a supposedly non-partisan federal agency into a political ally, reflects our New Age. It is frighteningly reminiscent of Nixon’s paranoid White House forty years ago. Mr. Obama learned from the writings of the first community organizer, Saul Alinsky. Mr. Alinsky’s 1972 book, A Pragmatic Primer for Realistic Radicals included twelve rules for radicals. Rule number twelve: “pick the target, freeze it, personalize it, and polarize it.” Mr. Obama is a master of that tactic. It is what he and his team do. As a strong anti-colonialist, Mr. Obama’s vision is to diminish the world’s perception of the United States. As a believer in the goodness of government, his desire is to build a welfare state with national health and a national kindergarten. It is the “Life of Julia” he sees as the goal.

In this environment, Republicans should have the upper hand, but they don’t. They must present a unified, forward-looking, positive agenda. Despite a stock market that is trading at all-time highs, the mood of the country is one of uncertainty and discontent. Confidence is low. Corporations continue to sit on cash and banks aren’t lending. GDP growth has been subpar. The labor situation is dismal, with minorities and youth having suffered more than the rest. Total employment is still three million jobs below where it was when Mr. Obama took office. Business is uncertain given the ramifications of ObamaCare. Regulations seem aimed especially at small businesses. Banks and hedge funds are being blackmailed by an aggressive justice department. (We should remember that when a public company is forced to pay $13 billion, it is the owners, the tens of thousands of shareholders, who are penalized, not management.) The future of tax rates is unknown, other than Mr. Obama has promised to raise them. An Administration that claimed to be the most open on record has been shut tighter than an unshucked oyster.

Republicans, in my opinion, could offer a three point program:

1)      Focus on economic growth. A faster growing economy gets people back to work and increases tax revenues. Corporate taxes should be lowered or eliminated; the individual tax code should be simplified and rates lowered, and regulations should be eased. Corporate funds held overseas should be allowed to return to the U.S. without penalty. Right-to-work laws should be encouraged, not demonized.

2)      Fiscal reform begins with entitlement and tax reform. Entitlements consume about two thirds of our budget and are growing at more than twice the rate of discretionary spending. A means test for Social Security should be deployed and the means test for Medicare should be expanded. The age for retirement should be raised to conform to life expectations. Individual retirement and healthcare accounts should be encouraged with lower tax rates, especially for lower income workers. Making people more responsible for their well-being is a positive, not a negative. Federal spending should be held in check. There is no reason why federal employment must match the growth in GDP or population expansion, as Nobelist Robert Shiller oddly suggested last week. Instead, the focus should be in the use of technology to improve productivity. It is worth remembering that the decade of the 1920s saw federal spending increase by less than one percent, from $11.3 billion to $11.4 billion, while nominal GDP rose 50% to over $100 billion. Unemployment stood at 11% when Harding took office in 1921. Eight years later when Coolidge left office, unemployment was 1.9%. Government is not the driver of growth.