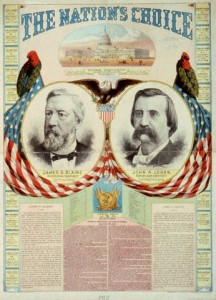 “The report of my death was an exaggeration.” Mark Twain was referring to an article that had appeared in the June 1, 1897 edition of the New York Herald, which reported that Twain was “grievously ill and possibly dying.” Mr. Twain, being mortal, did die, but thirteen years later, on April 21, 1910.

Today, similar obituaries are being written about the Republican Party. A few days ago, in the Wall Street Journal, John G. Taft, a grandson of Robert A. Taft, wrote a plaintive op-ed, “The Cry of the True Republican.” He was expressing what he felt his grandfather, “Mr. Republican,” would now say about the Party: “If he were alive today, I can assure you he wouldn’t even recognize the modern Republican Party, which has repeatedly brought the United States to the edge of a fiscal cliff – seemingly with every intention of pushing us off the edge.”

Perhaps that is so, but I suspect the elder Mr. Taft would despair even more about the fiscal state of the United States – the size of the deficits, the size of our debt, both legal and contractual. I think he would mourn the loss of a sense of personal responsibility and what growing dependency means for individual freedom. Mr. Taft would weep for a country that debauches its currency in a bid to keep alive unaffordable promises. He would grieve for a nation in which there are fewer people working than receiving government aid, where less than half the citizens pay federal income taxes and more than half receive some form of assistance.

If we assume that self-interest is the principal motivating factor for most voters, we may have already slipped the mooring that keeps our ship of state seaworthy and steady. No one who is receiving entitlements will vote for reductions or eliminations. That is a truth better understood by Democrats than Republicans and its manifestation can be seen in the ruthlessness of political campaigns that celebrate victory regardless of the means – a lesson learned the hard way by Hillary Clinton in 2008 and Mitt Romney in 2012. It has sharpened the edge between the Parties and has led to the partisanship that divides Congress.

Years ago, people like John Taft’s grandfather entered public service because they cared about the country – they wished to serve a nation that they viewed as special, to preserve and expand a unique experiment which had done more good for more people than any other nation or people ever did. They knew that republicanism depended upon an informed and responsible electorate. They wanted government to maintain its historical and moral values. They came not for acclaim or riches, but to work as servants for the master that was the people. They came to Washington with differing views as to how to best perpetuate the American experience, but they were all loyal sons and daughters of America. No one questioned their loyalty or patriotism. Together they were able to forge laws and maintain security that met the needs of a polyglot nation.

The polarized world of growing extremism today has been fed by many sources, but especially gerrymandering, which created “safe” seats for members of both Parties. The nominating process is more important than the election in those districts, allowing special interests to dominate. A number of seats on the Left and the Right are occupied by Representatives who are more interested in staying in power than doing what is right for the nation.  But schisms have long existed among Republicans. In 1912, “progressive Republicans” nominated Theodore Roosevelt under the “Bull Moose” banner. In splitting the vote with Taft, the election went to Democrat Woodrow Wilson. In 1992, Independent candidate Ross Perot siphoned off enough votes from George H.W. Bush that the election went to Bill Clinton. More than anything, today’s divide is manifested between those who believe in “big” government and those who believe in “small” government.

The rise of the Tea Party can be seen as a visceral, grass-roots reaction of the drift toward socialism, in which the state has assumed more and more responsibility for the well-being of its citizens. While intentions are honorable, such trends are fraught with risk for liberty. In Friday’s “Notable & Quotable” column, the Wall Street Journal quoted from C.S Lewis’s essay anthology “God in the Dock.” “Of all tyrannies, a tyranny sincerely exercised for the good of its victims may be the most oppressive.” Professor Lewis added: “To be ‘cured’ against one’s will and cured of states which we may not regard as disease is to be put on a level of those who have not yet reached the age of reason, or those who never will; to be classed with infants, imbeciles and domestic animals.” It was exactly that thinking that was behind ObamaCare – that we individually (and markets) are incapable of taking care of ourselves, that only government, which insidiously reaches further and further into our lives, can perform that task. Like pets, we first become pampered and then scolded.

The genesis of the Tea Party in early 2009 was reflexive and intuitive, perhaps not well thought out or well expressed – a true grass-roots movement. It was a call for smaller government, but one that recognized that laws must be obeyed and guidelines need to be observed. The Tea Party was populated by average, middle-income Americans – plumbers, the retired, small businessmen, etc. They were for a government that provided security for its elderly citizens and a safety net for those incapable of caring for themselves. But, they wanted a government that operated with an acknowledged understanding that every dollar they received from taxpayers was a dollar taxpayers did not have – that tax dollars were sacred to be used with care. They wanted a government that understood that prosperity stemmed from the private sector, while recognizing that government must provide rules and their enforcement. They were concerned with political and corporate cronyism. They did not want a government that managed their lives, or one in which politicians saw power as an end, not the means. They did not want a government that wasted money or intruded where it was not needed and was not wanted. Instinctively, they understand that government can influence behavior, but cannot dictate it and maintain a republic.

The Tea Party has been demonized because it is seen as a threat to all politicians, regardless of Party, those who see politics as a career – who view themselves as entitled to all the trappings, power and wealth that comes from being a Senator or Representative. Washington has made good men and women arrogant and supercilious, giving them a sense that they are the masters and the people is the servant. When citizens give up their rights and responsibilities, they reap the wind that is tyranny. In 1926, in a speech before the Daughters of the American Revolution, President Calvin Coolidge made that point. “It is not in violence and crime where our greatest danger lies…A far more serious danger lurks in the shrinking of our responsibilities of citizenship, where the evil may not be so noticeable but is more insidious and likely to be more devastating.”

Nevertheless, Republicans, being pulled in opposite directions, have stumbled. They have let Democrats dictate the agenda. Too many are humorless, in a business where humor is a positive attribute and can be used, as Ronald Reagan demonstrated with favorable effects. Too many Republicans sound defensive, knocking the programs of the opposition, rather than promoting their own. Politics is “feeling,” as Governor Chris Christie has said. Platforms must be simple and understandable. They must explain why their policies are important to the freedom of the individual. The willingness to shutdown the government was short-sighted and wrong. President Reagan had a 70% rule. If you agreed with him 70% of the time you were his friend.

Republicans, in my opinion, have been on the wrong side of the immigration issue. Pettiness and meanness among them have given the advantage to Democrats on this critical and sensitive issue. Phyllis Schlafly, lawyer and conservative activist had an op-ed in last Thursday’s Investor’s Business Daily: “For Republicans, Amnesty Will Be Political Suicide.” She wrote, “The current level of legal immigration here adds thousands of people whose views and experience are contrary to the conservative value of limited government.” Earlier, however, she had noted that the “borders test” (immigration versus emigration) “proves that people are coming to America, not fleeing from America to exit to other countries.” Those two observations are inherently contradictory. It is m