Rethinking the Fear of Overpopulation

Francis Kissling and Peter Singer have come out with a new article over at Project Syndicate called “Rethinking the Population Taboo,” in which they argue in favor of restricting population growth – or at the very least to debate about it – seeing humanity confronted with the otherwise insurmountable threat of “overpopulation.” They lament the fact that they are still in the minority with these thoughts:

One searches in vain for any suggestion that it might be appropriate, or wise, to seek to influence the number of children women choose to have, let alone to consider whether continued rapid population growth in some regions may be incompatible with the goal of sustainable development. … such proposals have been portrayed as colonialist and patriarchal, if not racist. White men should not be telling black women not to have babies.

Despite being in the minority, it seems as if more and more thinkers are slowly coming to the same conclusion. Among them are Bill Nye, “The Science Guy,” Al Gore, and surprisingly even some libertarians (one of which I have replied already at another point).

The fear of overpopulation is as old as population growth itself. It all started with the British economist Thomas Malthus, who in 1789 wrote about how he thought that the population growth occurring would sooner or later result in mass starvation. Since then, the fear has always found its followers. But while Malthus himself can still be forgiven – he lived at the beginning of the industrialization and had only known the world as one where population growth would always lead to disaster (or, as it was later coined, humanity was stuck in the “Malthusian Trap”) – the scaremongering since then and especially now can be seen only with a respectable amount of astonishment.

Many reasons for that could be pointed out. We could ask the moral question of how the state could even have the authority to tell a couple how many children they can get – as Singer and Kissling don’t seem to understand, advocating for state controlled breeding has not a lot to do with “White men telling black women not to have babies,” but politicians telling their citizens not to (this mistaken view is no surprise, though, considering Singer himself seems to lack moral judgement on many issues).

We could allude to the dark and racist past of the eugenics movement (as analyzed by Thomas Leonard in his Illiberal Reformers), especially from a libertarian viewpoint considering, as Jeffrey Tucker says, “scratch a socialist and you will discover a eugenicist who aches to use the state to control who lives and dies.” Or we could look at the disastrous results such projects have had in the last decades, most famously China’s one-child policy which has led to “35 years of forced abortions, female infanticide, unregistered births and traumatized individuals” and made China by far the number one abortion country in the world.

Nevertheless, the best argument against the “overpopulation” myth is the economic one. Or to just ask one question: If population growth truly leads to poverty and starvation, how is it possible that despite world population growing from 0.9 billion in 1800 to 7.4 billion in 2015, people have still gotten richer and fled poverty in lightning-fast fashion, as shown in the following graph? 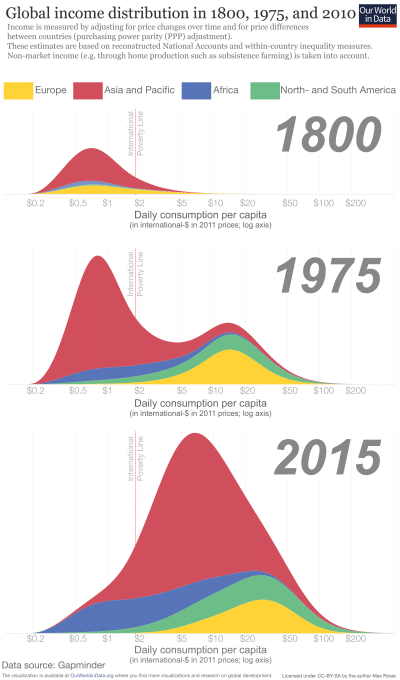 Cato’s HumanProgress.Org has hundreds of more statistics and graphs in which it is easily observable how population growth has been no problem whatsoever.

The reason for that is, as Jonathan Newman explains, that a “larger population not only means more mouths to feed, but also more heads, hands, and feet to do the producing.” Or, as Julian Simon always said: “The Ultimate Resource” are people, “skilled, spirited and hopeful people who will exert their will and imaginations for their own benefit, and so inevitably, for the benefit of us all.”

It is often said that while those who are afraid of “overpopulation” look at newborns as humans with empty stomachs, close to starvation, Julian Simon saw brains, sometimes even of the level of Mozart or Steve Jobs – or Hayek of course – which would later come to introduce new innovations and ideas which would change the world. And so while it is true that too many people are still dying on this planet (but increasingly less), there’s no reason to be pessimistic. It is only a matter of time – and political willpower given most hunger deaths occur in countries run by despotic regimes – till the last hunger deaths are also eradicated.

One can surely be skeptical about population growth from a cultural perspective, as some, for example Wilhelm Röpke, have done, seeing the continuing urbanization leading to the destruction of the rural areas, and by that of small communities (this should be discussed at another point, though). Regardless of this aspect, which is cultural criticism anyway, not a call for government action, the policy undoubtedly should not be restricting procreation as an increasing number of people suggest. Instead, people should continue to “be fruitful and multiply” (Genesis 1:22). Especially considering “the evidence against Malthusianism is stronger now than it has ever been.”

Kai Weiss is an International Relations student and works for the Austrian Economics Center and Hayek Institute.