Revolutions and the Liberal Utopia: An Interview with David Boaz

David Boaz is the Executive Vice President of the Cato Institute, the author of The Libertarian Mind: A Manifesto for Freedom, and the editor of The Libertarian Reader. A few weeks ago, our Kai Weiss talked with him in Washington DC about libertarian philosophy and its implications in different areas, as expounded in his two books. 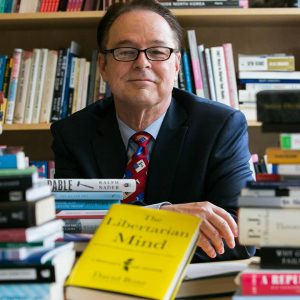 Kai Weiss: There are many different ways to argue for libertarianism. Could you give an overview of what approaches are out there, and about what you think is the most persuasive argument?

David Boaz: We have to think about: what is libertarianism? Is it different from liberalism or classical liberalism? In the modern world, at least in the United States, you can’t use the word “liberal” to mean supporting human rights and free markets. In this country, it is reasonable for people who would have called themselves classical liberals to call themselves libertarians. Maybe they are moderate libertarians, maybe they are not as radical as some libertarians. One distinction that the philosopher George H. Smith makes is that libertarianism is that branch of classical liberalism that emphasizes self-ownership as the basis of rights – that might be a plausible answer. When I talk about libertarianism, I say there are numerous ways to get there. Certainly, one is the classical, natural rights argument: all men are endowed by their Creator or by nature with certain, inalienable rights: life, liberty and the pursuit of happiness. Another way is utilitarianism or, as I prefer to say, consequentialism: you assess the consequences of any set of rules – and you would find many economists arriving at libertarian conclusions this way. If you analyze the effects of different economic policies, you will find that you will get better results the closer you get to a libertarian policy. In fact, the closer you get to recognizing the rights that natural rights libertarians believe we have, the better the results will be for everyone: peace, abundance, social harmony. I think you can also arrive at libertarianism through an examination of history: what does history tell us about what makes for a good society? It looks like dictators, socialism, fascism, central planning, all of those things, do not end up in making a good society. The American Founders learned from their study of history to be very wary of giving people power – much of the focus of their political philosophy and action was to constrain power, to divide and limit power. That’s another way to get to libertarianism.

And you would say that libertarianism, at the very least the natural rights one, is always universalist – it has these universal rights that are true for everyone? I remember an article in the Wall Street Journal last year where the author argued that libertarians have to be quite hawkish on foreign policy because of that: if you believe that there are universal rights, then you have to believe in implementing them all over the world. Is it a goal for libertarians to have a world where these rights are put into effect everywhere, or is it only about protecting those rights for you and those surrounding you?

Libertarian values are universal. All people – not just some people — are endowed by their Creator with inalienable rights. That includes people in Africa, people in China, people in the United States. What you do when faced with violations of rights is not something that libertarianism as a political philosophy can give you a clear guidance on. The American revolutionaries decided to fight, to throw off British colonialism. We have a bigger government in many ways than the British government was in the American colonies, and yet very few libertarians in the United States have decided to use revolutionary violence in order to advance liberty. If it’s not necessary to do that here, then there is no reason to think that it’s necessary for people in other countries to use revolutionary violence. There may be places where that is the best hope for advancing liberty, but the record for revolutions is not very good. The United States revolution is perhaps not unique, but certainly unusual in bringing about a much freer society than what we had before. The record of state warfare is also not very good in bringing about peace, abundance, and social harmony. So to argue that universalist libertarianism, that the philosophy that all people have rights, implies that you should create a state powerful enough to invade, conquer, and rework other states around the world, seems incongruous to me. One of the things we know is that war is the health of the state. You can’t think of very many polities devoted to war that run a libertarian policy at home – except for the fact that they have this massive war apparatus. If the United States government decided to liberate all the oppressive people of the world, what would be the tax rate implied in doing that? And where would you get enough men under arms to do that? You would almost certainly need conscription. Now, you could pick individual countries and say, “Let’s liberate Afghanistan, or let’s liberate Iran,” but in that case: why stop there? There are certainly countries in Africa that are more oppressive than Saddam Hussein’s Iraq was. Or Cuba, ninety miles off our border: the only totalitarian country in Latin America. Should we invade that country? We tried that once, didn’t work very well. So I guess we would need a bigger invasion force and then that raises the question, in the first place, we will kill a lot of Cubans, and in the second place, a fair number of Americans are likely to die, and we will need taxation and possibly even conscription to do that. So no, the fact that Americans wish freedom for all people does not mean that it is either mandatory or prudential to create an American state powerful enough to even in theory bring freedom to the people of 190 countries.

Yuval Levin wrote a book called The Great Debate a few years ago, where he argues that the political arena can really be divided between Thomas Paine and Edmund Burke – and while libertarians and progressives are on the one side, characterized by Thomas Paine, who has a universalist, idealist thinking, who is utopian and revolutionary, you have on the other hand the conservatives, characterized by Edmund Burke, who has a more particularist, traditionalist mindset. Would you agree to this viewpoint that libertarians are perhaps closer to progressives than to conservatives because of that?

It depends on what you mean by progressives, so I don’t know if that gets us very far. Libertarians believe that there is a universal right to liberty and all people should be free. Depending on how you define progressives that’s not what they believe. So you’ve picked one aspect of shaping political thought that doesn’t seem particularly essential to me. I would say that Thomas Paine is a radical liberal and Edmund Burke is a conservative liberal. They are both liberals, they both sought liberty under law – ordered liberty. Hayek was certainly a great admirer of Burke, and no one argues that Hayek isn’t a liberal. The question of how much respect you give to custom is one that liberals can debate. It also depends on whether you mean custom or traditional coercive measures. The fact that Americans have certain customs in the way that we interact with each other is one thing, the fact that many societies have been shaped by coercive systems is quite another. Would Burkeanism imply that you don’t end slavery? You don’t end the Indian tradition of the widow throwing herself on the husband’s f