Rich leftists rant at the rich, and then get richer still 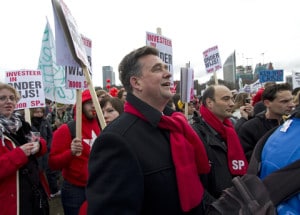 The immense wealth of anti-capitalist crusaders like Michael Moore is something to behold, as is the way Leftist policies just make the gap between rich and poor even wider

Our leftist friends have decided that income inequality is a scourge that must be addressed. That might be a noble goal if they were motivated by a desire to improve the lives of the less fortunate.

Based on their policy proposals, though, it appears that the main goal is to punish the so-called rich. And they’re so fixated on that objective, Margaret Thatcher pointed out, that they’re willing to make the poor worse off.

And what’s especially bizarre is that rich leftists are among the biggest cheerleaders for these policies. Heck, I’ve even debated some of these limousine liberals, as you can see here and here. But maybe their feelings of self-loathing and guilt are justified. After all, it seems that statist policies are actually associated with higher degrees of income inequality.

Let’s see what Steve Moore and Rich Vedder discovered when they looked at evidence from the states. Here are excerpts from their column in the Wall Street Journal.

“Our state-by-state analysis finds that the more liberal states whose policies are supposed to promote fairness have a bigger gap between higher and lower incomes than do states that have more conservative, pro-growth policies. …According to 2012 Census Bureau data (the latest available figures), the District of Columbia, New York, Connecticut, Mississippi and Louisiana have the highest measure of income inequality of all the states; Wyoming, Alaska, Utah, Hawaii and New Hampshire have the lowest Gini coefficients.

“The three places that are most unequal—Washington, D.C., New York and Connecticut—are dominated by liberal policies and politicians. Four of the five states with the lowest Gini coefficients—Wyoming, Alaska, Utah and New Hampshire—are generally red states.”

“Do the 19 states with minimum wages above the $7.25 federal minimum have lower income inequality? Sorry, no. States with a super minimum wage like Connecticut ($8.70), California ($8), New York ($8) and Vermont ($8.73) have significantly wider gaps between rich and poor than those states that don’t. What about welfare benefits? …In general, the higher the benefit package, the higher the Gini coefficient. States with high income-tax rates aren’t any more equal than states with no income tax.”

So what’s the bottom line?

“The conclusion is nearly inescapable that liberal policy prescriptions—especially high income-tax rates and the lack of a right-to-work law—make states less prosperous because they chase away workers, businesses and capital. …When politicians get fixated on closing income gaps rather than creating an overall climate conducive to prosperity, middle- and lower-income groups suffer most and income inequality rises. …John F. Kennedy had it right that a rising tide lifts all boats. It would be better for low- and middle-income Americans if growth and not equality became the driving policy goal in the states and in Washington, D.C.”

Speaking of rich, guilt-ridden leftists, Michael Moore is getting divorced and the fight with his soon-to-be ex is resulting in some revelations about the immense wealth of this anti-capitalist crusader.

Here are some eye-catching details from a story in the UK-based Daily Mail.

“According to Celebrity Worth, Moore has $50m in assets. …the Torch Lake mansion…put a spotlight on his wealth and opened him up for ridicule because he has so often criticized the rich in his films. …The home, which was completed years ago, is believed to cost in the neighborhood of $2m. …

“The lake house isn’t their only home. They own a total of nine properties in Michigan and New York. Their Manhattan condo was created through ‘the combination of three separate units,’ according to The Smoking Gun. …Together Moore and Glynn own ‘multiple substantial residences and multiple companies,’ including Dog Eat Dog Films, the production company behind films Roger & Me and Bowling for Columbine.”

Nine properties, including a lakefront mansion and a three-units-combined-into-one Manhattan condo?!? Who knew bashing the rich was such a lucrative gig.

Geesh, I’m a defender of the top 1 percent and I only have a house in Virginia. I’m obviously doing something wrong.

The views expressed on AustrianCenter.com are not necessarily those of the Austrian Economics Center.
hayek_admin2019-01-14T06:16:23+01:00