Right Collectivism – The Other Threat to Liberty: An Interview with Jeffrey Tucker 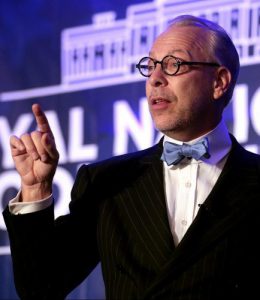 Jeffrey A. Tucker, who is the Director of Content for the Foundation for Economic Education (FEE), has published the book “Right-Wing Collectivism: The Other Threat to Liberty” in September. Last week, our Kai Weiss talked with him via Skype about the book and the threat of right-collectivism. 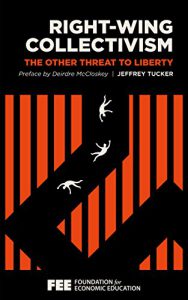 Kai Weiss: Let’s start off with an easy question. What was the purpose of writing this book? Why was it important right now to take a closer look at the right-collectivist movement?

Jeffrey Tucker: Right collectivism is on the rise around the world, both in Europe and the US – and in Latin America, as a response to the perceived weakness of the far-left. What people do not understand is that right-wing collectivism is in fact a coherent ideology. It’s not just purely reactive, it’s not just anti-leftist. It is for something, and – I think very crucially and critically – it’s anti-liberal. And many people do not understand this. What happens typically is that you get well-meaning people who decide they don’t like left-wing socialism, and they are looking around for movements that they can join to oppose them. And some of them might have libertarian impulses, or they might just simply want freedom. They don’t understand what they are getting involved with with these right-fascist movements that have a deep and rich anti-liberal agenda that dates all the way back to the early 19th century.

The purpose in writing the book was to discuss this alternative tradition of statism. It’s another way to control people, it’s another cultural model for managing society from the top-down. That’s what we are talking about. The reason my book makes a contribution is that there has not been much talk about this in many decades – especially for Americans this is the new kid on the block. And people are so naïve, they don’t even recognize it when it’s staring them in the face. They don’t understand it. And I know this to be true, because within the last several years I have been at gatherings of libertarians for example, and had a speaker stand up, and advocate that magical combination of views: anti-immigrant, anti-trade – or mercantilist protectionist, in favor of strongman, top-down management of society, a worship of police, a despising of the free press, and a putting down of intellectuals. That’s the rough outlines of the ideology, all these points, all combined into one speaker. And people can go sit there, and think: “Oh that is a fascinating view.” They are completely oblivious about what this could actually mean, and where it actually comes from. So the purpose of my book was really to trace out a family tree of the rise of what I call right-wing collectivism, but I think is more accurately called right-Hegelianism.

What distinguishes right-collectivism from other sorts of collectivism? In which way is it different?

Right-collectivism is different from left-collectivism, because right-collectivism throws out the parts of socialism that the bourgeoisie tends to despise the most. One of the things that annoys the middle class and the bourgeoisie about left-socialism is that it tends to be against religion, it tends to be suspicious of family, and it tends to want to take people’s property in various forms of regulation, taxation, and so on. Right-collectivism or right-Hegelianism is very happy to give you your religion, your family, and your property so long as all these institutions serve the nation-state. The nation-state becomes really the central unit of right-Hegelianism, it becomes the focus, really the end of history, “the source of happiness” – which actually is a quote by Donald Trump. That is a classical right-Hegelian view: the end of history is with the nation-state. The people organize according to nationhood, and dictated to by a great leader. All of this has a history: This concept of nationhood by itself deserves to be unpacked, because we don’t really know what that means anymore. In particular libertarians and liberals cannot discuss this topic of nationhood with any kind of intelligence or coherence – which is another reason I wrote my book: to help people who are opposed to despotism, to tyranny, in favor of freedom, think and talk about important topics like nationhood in a way it’s coherent.

Would you say that nationhood is inherently evil, or can it also have positive manifestations?

There are five bad ways to conceive of nationhood and one good way. The five bad ways are: race, religion, language, geography, and dynasty – like a shared dynastic, a hierarchy or something like this. Those are the five bad ways, because all of these ways conceived as nationhood are potentially coercive to you – whether you want to exit or enter, there will be conditions.

If you don’t speak the language, you’re excluded. If you do speak the language, you are included – you may not want to be included, by the way, but you will be included. And this is true for religion, for race, for geography, for dynasty, and for language. All five of these are coercive in an inclusionary way, and coercive in an exclusionary way. So when people talk about the nation, you really need to stop them, and say: “Hold on, do you mean race, language, religion, geography, or dynasty?” And chances are that they will be a little shocked and go “a little of both, a little of all of those things.” But wait a minute, you can’t just be a little of all those things. But the fact that I’m a white Catholic with a dynastic history which traces back 300 years in this country, and I live in this country, does that require anything of me in your vision of nationhood? Am I allowed the right to exit? Either intellectually or physically? These are the critical questions, and if you get this wrong, you are potentially erecting something like a prison state.

So what is the one way which nationhood makes sense? I think we have to go back to a brilliant lecture from 1882, by Ernest Renan, a French historian, who gave at the end of the liberal era the best summary of what nationhood is, and it really comes down to an affair of the heart: Where are your affections? What do you love the most in life? What association, what group-based association seems to elicit the best in you, the things that you love?

In that sense, I can be an American, and feel pride in my country, and in my Americanness. Or, I might read a book about Portugal, and fall in love with it, and consider Portugal my nation. There is nothing wrong with that. A liberal view of society permits people to have a wandering se