Recent reports by major investment banks carry a flavor of pessimism, by suggesting underweighting equities and higher exposure to high yield. We are cautious over the course of the next few months regarding equities and we would suggest defensive tactics (such as trailing stop losses, and hedging positions) and would not agree with the recommendation of greater exposure to the high yield (junk) market.

We can see at least five reasons why the markets have seen higher volatility over the last several days, namely:

The following graph shows high yield spreads (HY) and the S&P 500 implied volatility. The argument – which we do not support – is that HY spreads are still too high and as they decline gains can be made in the prices of the underlying junk bonds. 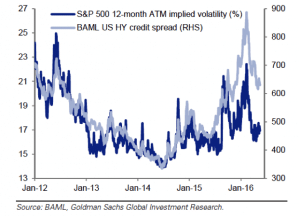 Our opinion is that the S&P 500 volatility will pick up steam with HY spreads possibly reversing their downward trend, which would imply capital losses. We believe that the number of broken deals this year is indicative of higher forthcoming volatility.

As the Wall Street Journal recently reported, a record $380 billion in US mergers and acquisitions have been abandoned so far this year. When someone thinks that in all of 2015 about $200 billion of M&As were abandoned, this speaks volume as to expectations and market sentiment. 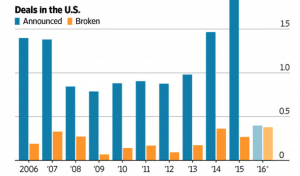 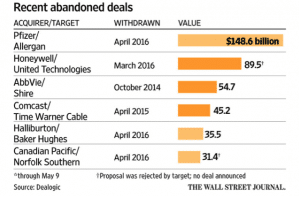 As we evaluate the chances of a market upside vs. a market downside, we believe that we should also take into account the options market where the sentiment is expressed in the best case vs. worst case scenarios. As the graph below shows the ratio since 2009 has remained about the same, fluctuating between 1.0 (even chances) to 1.07 (where the upside won over the downside). Lately, however, the ratio has been declining, implying a forthcoming increase in volatility. 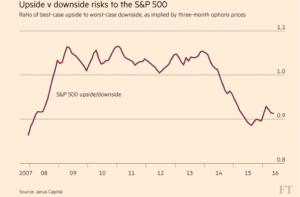 Insuring positions (like with do with our homes, cars, and other properties we own) may be a wise move. It is always prudent to examine the risk-adjusted returns (Sharpe Ratio) in order to answer the basic question: Am I paid enough for the risks I am taking?

Allow us to close with one of Sir John Templeton’s quote: “Bull markets are born on pessimism, grow on skepticism, mature on optimism and die on euphoria.”

The views expressed on AustrianCenter.com are not necessarily those of the Austrian Economics Center.
hayek_admin2019-01-14T05:55:40+01:00