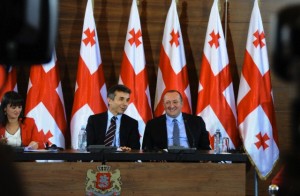 by Neil Emerick and Gia Janderi

FREE-market supporters are often asked to show concrete examples of countries where the policies they advocate have been successfully tried. Georgia, formerly part of the Soviet Union, offers a little-known economic success story.

Recently, after peaceful elections, President Mikheil Saakashvili handed power to Giorgi Margvelashvili, a candidate from the party elected by a majority in last year’s parliamentary elections. While controversy exists over Saakashvili’s 10-year term in office, the economic effects of his “Rose Revolution” have been widely praised. Inheriting a moribund economy corrupted by post-Soviet cronyism, his party of young, market-friendly politicians set about reversing the decline with reforms remarkable not only for boldness but their speed of implementation.

The views expressed on AustrianCenter.com are not necessarily those of the Austrian Economics Center.
hayek_admin2019-01-14T06:39:53+01:00