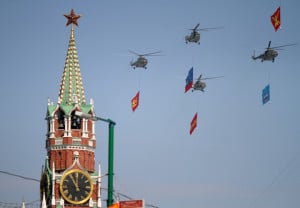 Russian army helicopters with flags fly over the Kremlin during Victory Parade in Moscow.
Image by © Dreamstime

Watching Mr. Obama, at Tuesday’s news conference in Brussels, as he characterized Russia as a “regional” power, one could not help wonder: Was the dig aimed at Mr. Putin, Mitt Romney, or at the American people, to assure them they have nothing to fear from the Russian bear? More important, though, was it accurate?

In terms of acreage, Russia is the largest country in the world, with almost twice the square miles of the next three largest countries – the U.S., Canada and China. But using other measures, Russia seems less formidable. With 144 million people, it ranks 9th in population, behind countries like Pakistan, Nigeria and Bangladesh. Its economy is the 8th largest, just behind Brazil’s. Russia’s army, with about a million men and women on active duty, ranks 5th in the world, behind China, the U.S., India and North Korea. Russia’s numbers, however, exclude reserves of approximately two million.

In some respects, Mr. Obama was right; Russia is a regional power and a weak one at that. The country is plagued with high unemployment, a weak economy and a life expectancy for men that is twenty-years less than ours. On the other hand, Russia’s territory is massive; it stretches from Vladivostok, less than 500 miles from the west coast of Japan to St. Petersburg, a few miles east of the Finnish border, a distance of 4070 miles. The Country encompasses nine time zones. Their southern border touches both China and North Korea, homes to the world’s largest and fourth largest armies. When Rudyard Kipling wrote “The Ballad of East and West,” he could not have been thinking of Russia; for there, in fact, the “twain” does meet; though not always peacefully.

As history instructs, military effectiveness is not just numbers, but the willingness to use the military one has. In acting like a 19th Century wannabe empire builder, Mr. Putin has shown no interest in abiding by the rules of Mr. Obama’s “globalized 21st Century.” What Mr. Obama may have missed in charm school is that it makes no difference in what century we live, bullies have always responded most aggressively to those who sweet-talk them. They respect strength, not coddling. It is the display of might – carriers, fighter planes and tanks – that gets their attention. A hundred years ago, in the first few years of the 20th Century, there were many who saw that age as a time that would usher in a golden, global period of prosperity and civility. For a few short years, it seemed that might be so. But the assassination of Archduke Franz Ferdinand of Austria and his wife in Sarajevo on June 28, 1914 thrust the world into war, which lasted, with a brief but tenuous interlude, for thirty years and cost at least 100 million lives.

History did not end with the collapse of the Soviet Union, nor has human behavior improved. Men and women are still both good and bad. To believe otherwise is delusional. It is far safer to be principled and definitive, and to let friends and foes know it. Despite this being a global world, the United States, because of geography and economic and military strength, has always been isolated from the territorial ambitions of other nations. It is all fine and good to suggest that, as did Tom Friedman in Wednesday’s New York Times in that Pecksniffian way he has, Europe and Ukraine’s dependency on Russian oil and gas should be countered by Europe and America emphasizing renewable sources of energy, wind and solar. But that does not address immediate concerns, which is how to heat homes and run factories today and tomorrow.

Russian revanchism has been obvious since 2008, when Russian troops moved into the South Ossetia and Abkhazian regions of Georgia, purportedly in support of peoples who claimed Georgian troops had taken over their local governments. (Revanchism is a fancy word of French derivation that describes the political manifestations of the will to reverse territorial losses. Its origin stems from France’s loss of Alsace-Lorraine in 1870 to the Germans following the Franco-Prussian War. Ominously, it is a word that was widely used to describe events in the Balkans in the years leading up to World War I.)

The collapse of the Soviet Union in 1989 brought forth a sense that democracies would prevail, and that independent states could and would align themselves politically and do business with whomever they chose. Such thinking did not take into consideration any sense of revanchism on the part of the new Russia, nor did it allow for the fact that many newly formed countries themselves had complicated histories. The people of many of these countries descend from myriad heritages and religions. Turks, Mongols, Tatars and Russians had, at different times, occupied these regions, bringing with them their own customs, religions and languages and leaving behind deep-rooted passions that emphasized differences, rather than similarities. Different parts of Ukraine had been subject, at different times, to the Ottoman, Polish, Russian and Austro-Hungarian Empires. The Crimean War, in the 1850s, saw the British Army side with the Turks to expel the Russians from the Peninsula. Given his response to events in Egypt, Libya, Syria, Iran, North Korea and Ukraine, one would never have known that Mr. Obama was “comfortable with complexity” had he not told us, as he did in a recent “New Yorker” interview. If the Middle East seems complex today, it will only compound once Iran gets nuclear weapons.

The story of Eastern Europe is a history alien to the experience of most Americans. Many who came to this country from that part of Europe in the mid and late 19th Century were eager to leave homes consumed by constant war. Poland, which once had an empire that encompassed part of Ukraine, disappeared from all 19th Century European maps. Towns, cities and countries were gobbled up and treated like chips to be bartered away and later reclaimed. The culture and religious feelings of the people were of little interest to those who conquered and governed them.

In Brussels, Mr. Obama attempted to allay the matter, resorting to lawyerly logic to reject Russia’s invasion of Crimea as a violation of “21st Century” thinking: “The borders of Europe cannot be redrawn with force…international law matters.” It was an argument that might have won plaudits in a college debate, but one that failed to recognize the challenge of the gauntlet thrown down by Mr. Putin. Far better would be what Robert Gates proposed in an op-ed in Wednesday’s Wall Street Journal: “The aggressive, arrogant actions of Vladimir Putin require from Western leaders strategic thinking, bold leadership and steely resolve – now.”

Our response should include a reversal of the recent decision to downsize our military; it should include bolstering the missile defense system along Poland’s eastern border; it should include war games with the Baltic nations; it should have the 7th Fleet focused on the Mediterranean region, rather than searching the southern Indian Ocean for remnants of Malaysia Airline Flight 370. The latter is an act of compassion, the former one of necessity. It should include building a missile defense shield in Japan and South Korea. The United States should never publically utter promises or threats it cannot carry out, like “red lines” not to be crossed. We should learn from President Theodore Roosevelt: “Speak softly and carry a big stick. You will go far.”

What must be avoided is a situation that deteriorates to a point where war becomes inevitable. Everyone in the Administration should (as should all European leaders, including Mr. Putin) read Christopher Clark’s book, The Sleepwalkers: How Europe Went to War in 1914. Mr. Obama was right about Russia in the most simplistic sense. They are no longer a great power. But he was wrong to be dismissive, as Mr. Putin threatens what is a delicate balance of peace. Russia may no longer be the beast that was the Soviet Union, but its interest is global, as can be seen in Latin America – with their involvement with Cuba, Venezuela and Nicaragua. It is startling to realize that it was less than six months ago that Secretary of State John Kerry declared, “The era of the Monroe Doctrine is over.” It is over because the Obama Administration has seen fit not to enforce its provisions. In acting in self-interest, Mr. Putin is simply doing what national leaders have done since time immemorial. The world Mr. Obama appears to envision is an Arcadian world where talk and reason change minds and overcome evil; it is a trivial and reckless world, in which a woman’s right to free birth control takes precedence over defense spending.

In contrast, Mr. Putin’s world is Realpolitik. In that sense, there is nothing “regional” about Mr. Putin or Russia. It makes no difference if Russia and Mr. Putin are acting out of weakness or strength, just that they are acting. At this point, Mr. Putin played a “King” and Mr. Obama threw out a “Jack.” It’s not good enough.