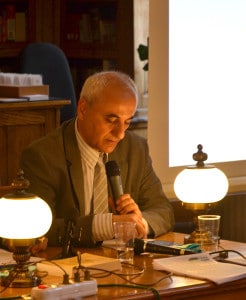 Could you explain a little bit how President Micheil Saakaschwili changed since he came to power? From an “outside” point of view, it looks like he has been corrupted. He seems to be under pressure from a lot of different interest groups.

I don’t really see the interest groups. Of course there are some businesses that had different chances [from] others, but they have never really had any privileges. The earlier political and economic system included bigger chances for corruption or favoritism. I think the Georgian government did a lot to deal with small corruption. If you look to its international evaluations, Georgia is quickly changing its ranking.  Our government expenditures are very transparent.  Anyone can observe what is happening.

Are there more business opportunities in Georgia today than before Saakashvili?

Absolutely.  We have nothing to compare with …

I think the fastest growing sectors in Georgia are financial, insurance, and banking sectors.  Last year, I would also include tourism.  Every year it was developing at 30%.  For instance, one year was 2 million tourists, the next there were 2.8 million tourists, and the next year 5 million.

So the tourist sector is definitely growing. What else?

Georgia is one of the best places to open a business because it is so easy.  There is also an emphasis on property protection.  Due to the ease in opening a business, entrepreneur enterprises increased 8 times during Saakashvili’s period.

Mainly due to foreign investments?

Is there a lot of Russian investment in Georgia?

Yes, there is a lot of Russian investment, like in wine production. There are lots of other investments though, like Turkish, Norwegian, German, American, and Azerbaijan, just to name a few.

One cannot neglect Russia’s powerful ability to destroy everything in a small and poor country.  They use money and their secret service institutions.  Russia is doing everything it can in ex-Soviet Union places to maintain their control.  They were not successful in the Baltic Republics, which had western support and were accepted into NATO.  If Georgia had the same kind of attention, things could be easier for us and we might have already been NATO members and,  then perhaps Russia would forget about us.  As there is no strong political or public support, they try to undermine us with diplomatic and/or economic pressure. There still isn’t free trade with Russia, even though we are selling them electricity. We also don’t have postal service between Georgia and Russia, which is why I was sending mail from here [Vienna] to Russia yesterday.

Before Micheil Saakaschwili, neither the Minister of Interior nor Minister of Defense were allowed to be appointed by a Georgian president without confirmation from Moscow, even though Georgia was already independent. Saakashvili decided to stop this practice. Why should our police chief be confirmed by Russian authorities? Russia is never happy with our initiatives. We have seen that the European Union and nations are much easier to cooperate and have a partnership with. We would much rather work with them rather than Russia. 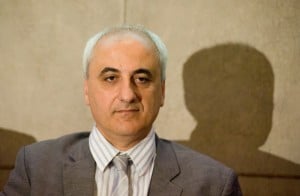 Gia Jandieri is an active member of Economic Freedom, Atlas and many other free market networks.

Do you think Georgia would need more political and economic support from the European Union?

Yes, if we had stronger and open support from the European Union, our problems with Russia would have be lessened, even before the war.  The war occurred because Russia knew we had no support.  There is a reason why Russia is steadfast against Georgia and not Azerbaijan.  Georgia is the gateway to the Black Sea and Turkish territory.  Armenia is also a Russian ally.  Georgia is strategic for Russia to block the entire Central-Asian region from accessing the markets, if they chose to do so.

What about Eduard Schewardnadse:  Do you have any information about him?

He’s at home.  He’s 85.  Sometimes he gives interviews.  I think this is the epitome of personal tragedy.  In his life, he was a Communist leader.  He understood that there were many things wrong with Communism, but he was educated enough to understand the other world better.  He did try to improve things. But he made many mistakes in the Soviet Union and in Georgia – like how he would fight corruption and then give in to corruption again.

Gia Jandieria at The Free Market Road Show 2013 in Prishtina

Gia Jandieri is an economist. He graduated from two universities in Georgia and has worked at the country’s State Audit Office, Central Election Commission, National Parliament and the Anti-Corruption Agency.

The views expressed on AustrianCenter.com are not necessarily those of the Austrian Economics Center.
hayek_admin2019-01-14T06:45:13+01:00