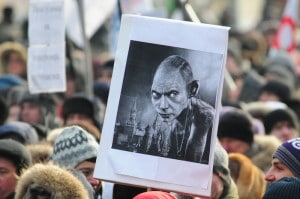 After the overthrow of the Ukrainian president Viktor Janukowitsch Russia sees its interests in the region jeopardized. By now Moscow has garrisoned 16.000 Russian soldiers at the peninsula Crimea. This is all about power, political influence and economic interests. The question is: How far will Vladimir Putin go in defending his sphere of influence.

Shortly before the Ukraine–European Union Association Agreement was about to be concluded, the Russian president Vladimir Putin intensified the pressure by imposing trade restrictions on Ukraine. In this very moment also the decision- makers in the European Union might have realized that they had initially underestimated the Russian opposition to this agreement.

At the moment when the fate of president Viktor Janukowitsch had been sealed and he had been forced to leave the capital hastily and a provisional government had been appointed, the Kremlin realized that its interests were at stake. It is ancillary if the outgoing president Janukowitsch had asked Putin for military support or if Russia had intervened on its own behalf. In any case it is apparent that president Putin is very eager to preserve and protect his interests.

When it became clear that Viktor Janukowitsch, Putin’s political handyman, would not have anything to decide in Ukraine anymore, the Duma, the first chamber of theRussian parliament, was quick to argue for a military intervention in Ukraine. Following this also the second chamber – the so called Federation Council – followed this appeal. Everything seemed very formal and it was as if Putin would only obey the pressure of his deputies. But strictly speaking Vladimir Putin has empowered himself to order a military intervention on Ukrainian territory. Russian senators have in fact consentaneously issued a blank cheque for a military operation of any length to president Putin. The operation shall only be completed when “the normalization of the political and social climate” has been achieved.

What is exactly meant by this is of course open to speculation. Russian minister of culture Vladimir Medinsky euphorically twittered after the ballot that the days to come would finally show “for whom Russia is the true mother country”. The political elite in Moscow, and probably also the majority of all Russians, are convinced that the battle for the Maidan in the centre of Kiev has not been won by nationalistic, Ukrainian revolutionaries, but by “fascists”. Russia has justified the deployment of its troops to the peninsula Crimea with a request for help by the owerthrown Ukrainian president.

In international diplomacy people speculate about the question how far Vladimir Putin will be willing to go in order to bind Ukraine to Russia politically as well as economically. Some hardliners in Mocow are even desiring a push of Russian troops to as far as Donetsk and Kharkiv, where Russian flags are already being hoisted.

The fait of Crimea however seems to be sealed already. Even if the European Union and the USA should ever arrive at an agreement about sanctions for Russia, those measures will not be able to change anything. Moscow will control and administer the Ukrainian peninsula like a nonofficial protectorate, while at the same time formally abiding with Ukrainian jurisdiction. A complete secession from the Ukrainian mainland might not even be necessary.

Note from the AEC: These are indeed gloomy prospects for the region, but it is not appropriate for libertarians to be pessimistic. One should rather try to improve the situation, no matter how chanceless this might seem. This is why we would like to call attention to the Emergency Economic Summit for Ukraine at this point, since it is an attempt to find optimal solutions for Ukraine’s future economic policy.

A longer German version of this article was published here.

The views expressed on AustrianCenter.com are not necessarily those of the Austrian Economics Center.
hayek_admin2014-03-10T16:18:02+01:00