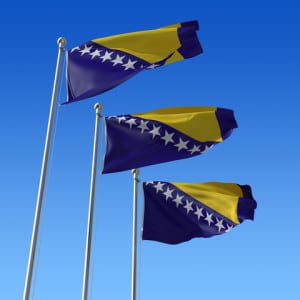 Actually it will be 100 years ago tomorrow at 11:00AM, that Archduke Franz Ferdinand, heir apparent to the Austrian-Hungarian throne, was pronounced dead. He and his wife Sophie had been shot by an assassin a few minutes earlier while on a visit to Sarajevo, capital of Bosnia. The assassin, Gavrilo Princip, was a Serbian nationalist. For the next few weeks, diplomats from all major European countries scurried frantically around (like John Kerry today), in an attempt to head off what too few feared could become an inevitable conflagration. At the same time, they considered mobilization, while measuring capabilities and readiness. They secured alliances.

Diplomacy came to naught. A month and a week later, on August 4th, a day after Germany declared war on France, England declared war on Germany; thereby engulfing the continent in total war. Within the month there would be 182,000 casualties, as German troops, in a week-long battle and outnumbered almost two to one, virtually annihilated Russia’s Second Army at the Battle of Tannenberg. Three battles alone, over the course of the War, saw more than 2.5 million casualties – Gallipoli, Verdun and the Somme. On the first day of the battle of the Somme, England had 60,000 casualties. By War’s end, four years later, three months and one week later 20 million of Europe’s youth would be dead, with even more millions injured. The foundations for the Second World War had been laid, causing the 20th Century to become the bloodiest in the history of mankind.

There are many who suggest that the world today is similarly positioned as it was in 1914. I suspect the differences are the more pronounced. Nevertheless, there are similarities. One hundred years ago, old empires were fading while new ones were rising. The Ottoman Empire had been in decline for some time. Its occupation of the Balkans had been absorbed by two fading empires – Tsarist Russia and the Austro-Hungarian Empire. The Turkish Straits, still owned by the Ottomans, were eyed enviously by the Russians. The British Colonial period was nearing an end; though most Brits could not see that happening. Germany was a relatively new country – like Italy it had been unified in the second half of the 19th Century – and since Bismarck’s time had been looking to expand east. The Slavic people in Serbia were flexing their muscles, chafing at borders arbitrarily drawn by Vienna and, to a lesser extent, by St. Petersburg. At least a dozen ethnic populations occupied the region, with three distinct religions dominant – Muslim, Orthodox Christians and Roman Catholics. It was a combustible mixture.

Today, the world is faced with a disintegrating Middle East and rejuvenated, aggressive authoritarian regimes in Europe (Russia) and Asia (China.) Russia’s annexation of Crimea is indicative of a Russia with a bolder and more pugilistic vision. China is asserting its sovereignty in the South and East China Seas. “Authoritarian forces,” as Francis Fukuyama wrote recently in the Financial Times, “are on the move.” In the Middle East, Sunni extremists are battling Shia extremists. Extremists on both sides talk of establishing Caliphates. Both would like to eliminate Israel. Christians are being targeted by death squads. Like the Balkans, the Middle East is comprised of people from myriad ethnicities living in villages and cities that have been governed by others for hundreds of years. Like the people of the Balkans, who live in countries whose borders were decided by Austrians and Russians as the Turks retreated toward Constantinople, those in the Middle East live in places where boundaries were drawn by the French and the British in the aftermath of World War I. Many of these people have been persecuted for so long, and have been kept so poor, that they have little stake in the world as it is; so little to lose, which makes them more dangerous. War, to them, does not carry the threat of material loss that it does to us who live comfortably thousands of miles away.

It is wisdom that is wanted in world leaders. Political egos too often interfere with common sense. Certainly that was true in 1914; though other factors were at work as well. In 1914, for too many of Europe’s youth, war had lost its horror. One can read the early poems of the British poets who marched off to war full of pride and glory, and then contrast them with those written toward the end when death, rot and rats were constant companions. Owen Seaman, in “Pro Patria,” caught that early feeling: “Because, where honour calls you, you must go.” Julian Grenfell, in “Into Battle,” spoke of “duty:” “And he is dead who will not fight; and who dies fighting has increase.” Young men marched to war, heads high, not realizing that fate would skimp on glory, but be generous with sorrow. Later, after months in the trenches, their tunes changed. Wilfred Owen (who was killed a week before the Armistice) wrote in “Dulce Et Decorum Est.” “My friend, you would not tell with such high zest to children ardent for some desperate glory, the old lie: Dolce et decorum est pro patria mori.” (It is sweet and fitting to die for one’s country.) In 1915, Alan Seeger, a Harvard graduate and American poet who had joined the French Foreign Legion in order to fight the Hun, sounded resigned in “Rendezvous.” “But I’ve a rendezvous with Death, at midnight in some flaming town, when Spring trips north again this year, and I too my pledged word am true, I shall not fail that rendezvous.” He did not fail. Alan Seeger was killed in Belloy-en-Santerre on July 4, 1916, aged 28.

One senses this same innocence, pride and indifference to death in the young men of the Middle East who willingly commit themselves to a cause of which they are as ignorant as their English, German, French, Austrian, Russian and Italian cousins had been a hundred years earlier. One sees that same bellicosity today, which had been present in some pre-World War I leaders, in Russia’s Vladimir Putin. Egos and arrogance are as common among world leaders as they ever have been. Such attitudes too often lead countries in directions that common sense would avoid.

History is a guide, not a lesson plan. Human emotions like greed, pride, fear, hope, love, hate, anger, despair, grief and joy do not change. But conditions do. An important difference today is the position of the United States in the world. In 1914, there was no superpower. England had the strongest navy, but its colonial period was already beginning to wane. Germany had the largest army, but Russia’s was expanding. Today, the United States straddles the globe unmatched in its reach and its power. It is exceptional in history, because besides exuding power, it also serves as a beacon for freedom and generosity.

We also have the benefit of knowing what did happen subsequent to 1914. But simply knowledge of the past does not ensure the avoidances of past mistakes, for pride, hatred and fear can push aside reason, respect and responsibility.

By 1914, the Continent of Europe had enjoyed almost a century of peace. There had been skirmishes. In the Franco-Prussian War (1870-71) France lost Alsace-Lorraine, but in general, after the Napoleonic Wars, Europe had been peaceful. While the Civil War was as close to Americans in 1914 as Vietnam is to us today, there was nothing comparable in Europe in 1914. The horror of war – the cost in human life and suffering, as well as in treasury – was not present. It was relatively easy for determined leaders to appeal to duty, pride and patriotism. Memory is an important retardant to war. In the decades following the bombing of Hiroshima and Nagasaki in 1945, people all over the world understood the awfulness of nuclear weapons. Images of the devastation to those cities kept our imaginations alive to the mantra – never again! Can we say the same for those today in the Middle East who both possess such weapons (or are close to doing so) and have such a small stake in the world as it is? Does Mr. Putin understand that people can only be pushed so far before they revolt? Do memories of Nanking cause Chinese leaders to test Japan? Do those in power understand the horrors they might unleash? Do our leaders at home? Will a consequence of Arab unrest be an attack on Israel, or a blockage of the Suez Canal or the Strait of Hormuz? Could one of those incidents be the catalyst that plunges the world into war? How would we respond? How should we respond?

Our allies must trust us; they rely on us. When we precipitously exit those countries in which we have fought militarily, but in vain, we often abandon those who aided us. It h
appened in Vietnam. It happened to Dr. Shakil Afridi in Pakistan, after he helped finger Osama bin Laden. It is happening in Iraq today. It will likely happen in Afghanistan. Those are the refugees who should be permitted entry into the U.S., not Central American immigrants for whom we have no obligation. If our word is not good to those who have aided us in the past, why will anyone trust us in the future?

The security of the world today is largely reliant on the United States – our strength and how we exercise it. There will always be bad people, and bad people take advantage of weakness. It is our defense capabilities and our adherence to universal moral principles – right versus wrong, respect versus disdain, honor versus blame, faith versus denial – that will help keep us and the world safe. “The lamps are going out all over Europe,” is a statement generally attributed to British Foreign Secretary Edward Grey in 1914. Responsibility for keeping lights lit in 2014 rests primarily on our shoulders.

There is no reason why the civilized world today has to follow the path the civilized world took one hundred years ago. I don’t think it will. But greedy and egotistical people do stupid things. Certainly none of the political leaders in Europe in 1914 ever thought they would cause the harm they did. But, to not recognize the danger signs – to allow bad people to take advantage of good ones, to let evil prevail – is to risk going down that same road.